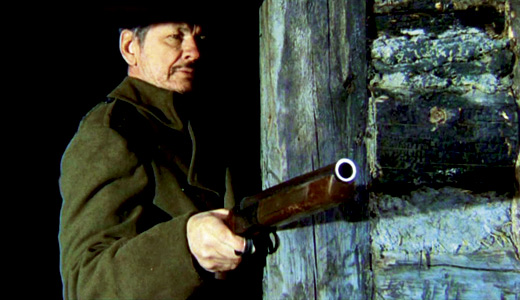 Action stalwarts Charles Bronson and Lee Marvin turned this run-of-the-mill actioner, based on a true story, into a perennial ’80s favorite. Bronson plays an anti-social trapper, forced to kill a man in self-defense at his isolated mountain cabin. Canadian Mounty Marvin arrives not long after, leading an armed posse, believing that Bronson is a bloodthirsty killer. They fire first, but Bronson kills several of the men before escaping into the frozen Yukon wilderness with the remainder, now whipped to a fever pitch, close behind. Great stuff, now on Blu-ray.

Two of our favorite cheesecake films of the ’80s. “X-Ray” is better known as “Hospital Massacre,” a maniac-slasher romp set in a dark hospital starring arguably the most beautiful naked woman ever to grace both Playboy and “Hee-Haw,” the voluptuous Barbi Benton. She looks amazing in a backless hospital gown. Yow! The second finds Klaus Kinski (always a sign of insanity) and ravishing Marianna Hill — who adorned many a movie and TV show back in the ’60s and ’70s, including “Star Trek” — as an advice columnist who receives murderous letters and occasionally shows her remarkable boobs. Enjoy.

This subtitled French drama is an emotional powerhouse, with Emmanuelle Riva and Jean-Louis Trintignant as an elderly married couple whose refined, dignified life is shattered when the wife suffers a stroke. And as her condition worsens, their relationship becomes impossible, and their head-strong daughter’s insistence on a caregiver only makes matters worse. Sounds like a light-hearted lark, huh? Imagine it as a vampire movie with the stroke standing in for Dracula, and you may come to see the world in a new light. A master’s class in writing, acting and directing.

A biodoc on Arnel Pineda and the legendary rock group Journey, retelling how his YouTube video landed the Filipino singer a gig as frontman on their world tour, replacing Steve Perry (via Steve Augeri, Jeff Scott Soto and Jeremey Hunsicker — the latter of which was also found on YouTube). Pineda’s vocals here are extraordinary, channeling Perry’s stratospheric tenor and, if anything, enriching it with a sneaky Latin sensitivity that guitarist Neal Schon seems to enjoy playing to. Yeah, we’re fans.

One of the best of the recent crop of animated woodsy toons, with an original story, exceptional visuals and a wry, whimsical style that really sets it apart. With less emphasis on goofy humor, it behaves more like an action film for older kids, with M.K. (Amanda Seyfried) discovering a secret world of forest guardians when she goes to live with her rather cold dad, Jason Sudeikis. Their queen (Beyoncé) tasks her with saving their world — and ours — which leads to a colorful and exciting forest adventure where everyone learns a valuable lesson. What more could you want? From the folks behind “Ice Age.”

An engaging tale that parallels the history of Hong Kong and its acquisition by China from Britain, with the mysterious origins of an Anglo-faced child (Aaron Kwok), one of seven siblings from a poor fishing community. His life is a humiliating trek to find a place in the world, starting with an entry-level job at the Imperial East India Company, then attending night school, making friends in ever-higher social strata, and finally educating his mother (Josie Ho/Nina Paw) so that she, too, can have a better life. We liked it.

This starring vehicle for longtime B-actor J. Richey Nash is a solid, entertaining little drama about a pro-baseballer, his career abruptly over due to a painful injury, coming home to heal the emotional wounds of his past. But the best thing about it is co-star Courtney Henggeler, better known as Missy Cooper, Sheldon’s stacked and statuesque sister from “The Big Bang Theory.” She really shines; worth your time.

Adelaide Clemens from “The Great Gatsby” and Luke Evans from “Immortals” lead an exceptionally good-looking cast in this unexpected, exciting, funny gang-and-hostage outing from the director of “Versus.” A rich couple is kidnapped on the highway by a gang of brutes and held in a lonely, abandoned house. Seen it? Not like this, you ain’t! We wouldn’t dream of spoiling what happens next. Highly recommended, especially for terror fans who don’t mind a little blood.

NO PLACE ON EARTH

If there are two things we love, it’s documentaries and caves, so this surprising entry about the Ukraine’s largest cave system really piqued our interest. Now the kicker: The cave was used by desperate Jews hiding from the Nazis, spending almost a year and half in complete darkness, making it the longest uninterrupted underground human survival in recorded history. A good tale, nicely told.

The latest low-rent star-studded hodgepodge of instant movie-jokes, pratfalls and other assorted nonsense, this one starring Ashley Tisdale and Simon Rex as new parents bringing their baby home for the first time. But “something” seems to have arrived along with their little bundle of poop, so they set up cameras and bring in “experts” to help them out. You know this isn’t going to end well, don’t you?

Made for an estimated $10,000, this little indie, originally titled “Revenant,” does a lot of things right. Writer/star Stephen Twardokus gives it his all as the author who moves into a haunted house to gain insights into his next book, with indie-movie vet Liesel Kopp as the requisite damsel. Worth your time.

This Limey drama takes you into Britain’s rough and thriving competitive Reggae culture to explore institutionalized gay-bashing. A group of performers at a music competition humiliate a gay MC, then savagely beat his boyfriend, for which they receive a slap on the wrist. Were the MC’s lyrics really legally “at fault”? This flick has spawned a cottage industry of video rip-offs and a social furor in GB.

William “Captain Kirk” Shatner is creator and host for this two-and-a-half-hour, five-episode Trekkie wet-dream: A look into the minds of the men and women who have played Starfleet Captains. Patrick Stewart, Avery Brooks, Kate Mulgrew and Scott Bakula each take a turn expounding on their love of sci-fi in general and the specific fantasy of being the captain of a star-vessel. Originally broadcast on the EPIX premium cable channel/VOD service.

A trio of very young offenders, aged 15 to 17, convicted of violence, theft and drug charges, are locked away in a Montana prison. Clearly in need of emotional and physical therapy, they are instead placed under the care of a good-hearted, ball-busting guard who can only offer them discipline and a point in the right direction. But like any mistreated cur locked away in a pound, their anger grows until it boils over with deadly results. A devastating indictment of the U.S. penal system and the very notion of justice in our society.

Something of a step up in “found footage” films about a pair of detectives (Stephen Moyer, “True Blood,” and the sublime Radha Mitchell from “Silent Hill”) tracking a killer using footage that his victims shot during a bloodbath in an abandoned gas station. Wildly unpredictable with some great action scenes. We liked it!

This was obviously a labor of love for Billy Burke, Parker Posey and Danny Glover, teachers at a rundown high school, about to lose their jobs to budget cuts. They are good friends who have pooled their money for 10 years to play the same set of lucky lotto numbers — finally winning at the 11th hour! Uh, so what do they do now? Watch for the cameo by Bo Derek as “Destiny.” Worth checking out.

Andrea Riseborough and Clive Owen are terrific in this tale of an IRA informant in Belfast and her handler. She ends up spying on her neighbors, her son’s friends, even her own family until her brother’s operation is ambushed. That’s when everyone comes to suspect a mole, and Riseborough is at top of the list. The Irish accents are a bit thick, but no more than, say, “Doctor Who.”

A group of middle-aged-and-older women — once the hottest things on campus, on or off the b-ball court — hit the boards to save a mobile breast cancer screening clinic. Normally we would have run from this like the plague, but the women involved include Brooke Shields, Daryl Hannah, Wanda Sykes and Camryn Manheim. Yeah, it’s as obvious as it sounds, but we still found it very entertaining; with slimy Eric Roberts, lovely Charlotte Graham from “Gossip Girl” and cutie Jessica Rothe (“Onion News Network”).

A look at the shock of suddenly finding yourself in the middle of the Vietnam War from an Australian point of view. The men under the command of a no-nonsense Special Air Service Corporal joke and drink and smoke the day away, nearly unaware that there’s a war going on until one “odd angry shot” draws the fire to them in horrible ways. Far better than any American Vietnam movie that comes to mind. Recommended.

THIS IS MARTIN BONNER

Longtime character actor/director/writer Paul Eenhoorn is the titular aging, bankrupt East Coaster who moves to Reno to work in a nonprofit, helping newly released prisoners start a new life. There he befriends ex-con Richmond Arquette, and an interesting dynamic unfolds as the younger man tries to reunite with his estranged daughter. It makes you wonder who is really more imprisoned by life. Interesting.