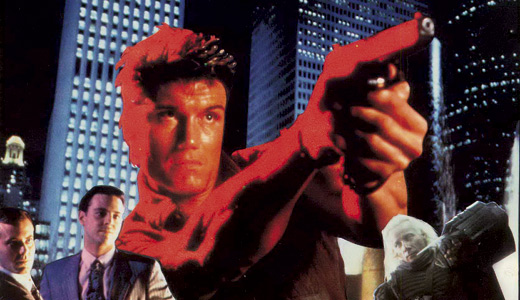 Dolph Lundgren is a cop on the trail of an alien druggist who injects people with NyQuil and then sucks the endorphins from their brains in this silly-assed, noisy action-romp better known as “I Come In Peace.” The alien has this neat-o CD player strapped to his wrist, see. It fires these killer discs that keep bouncing off of walls and stuff — pew, pew! — until they find your neck, see. Then, agghhhh! Blood goes everywhere! Cool. Lots of fiery explosions lead to the single dumbest line ever uttered in any movie, anywhere (you’ll just have to hear it for yourself). One of our all-time favorite dumb movies, now on Blu-ray.

Oh, wow! One of our favorite films ever! The immortal Larry Cohen (“Phone Booth,” “It’s Alive”) wrote and directed this wonderfully original monster movie starring Michael Moriarty, Candy Clark, David Carradine and Richard Roundtree. Someone or something is lopping people’s heads off and snatching them whole from the rooftops of NYC. Only twisted ex-con Moriarity knows what’s really going on: There’s a giant, flying Aztec lizard-god on the loose! An absolute must-own, now on Blu-ray with all the requisite bonus goodies. Enjoy.

An assassin (So Ji-Sub) takes on a routine job to partner with a man, then kill him afterward. The doomed man begs a favor: Please deliver money to his family. There he meets and falls in love with the man’s wife, coming to feel shame, remorse and guilt for the first time in his life — a deadly combination when his employers hear of it. A powerhouse romantic thriller from South Korea.

Dennis Quaid and Zac Efron snuck under the radar to make this little dramatic stinker about an agri-business Dad (Quaid) who wants his son to give up pro racing and follow in his footsteps. The last movie Roger Ebert ever gave a 4/4 rating co-stars Kim Dickens (“Hollow Man”), adorable little model-actress Maika Monroe and a cameo by Heather Graham.

In 1947, famed explorer Thor Heyerdahl built a balsa wood raft and set sail on a suicide mission: to cross 4,300 miles of trackless Pacific Ocean, proving it was possible for pre-Columbian South Americans to discover and settle Polynesia. This is a raw and frightening dramatization of that famed feat by a film crew from Scandinavia, where Heyerdahl is considered a cultural hero. The approach is brilliant and original; perfect if you’re tired of formulaic Hollywood pap.

A trio of dim Miami “personal trainers” (Mark Wahlberg, Dwayne Johnson and Anthony Mackie) decide to do a quick kidnapping to make a big score, only to have it go very, very wrong in this more or less true tale from action-director Michael Bay. After stumbling with the “Transformers” franchise, Bay returns to form with help from Tony Shalhoub, Ed Harris, Rob Cordry (“Warm Bodies”), drop-dead gorgeous Bar Paly from “The Ruins,” Rebel Wilson and Peter Stormare. How could this be anything but a hoot? (Oh, and watch for Yolanthe Cabau van Kasbergen as one of Wahlberg’s clients. You’ll know why when you see her. Woof!)

Dame Helen Mirren is all over the screen today, what with “Red 2” and the success of “Hitchcock.” But this grand old babe’s been turning in great performances for decades now — catch her naked and on top in 1980’s “Hussy”! Really! Butt, er, but nothing compares to this seven-disc offering of veddy, veddy British Detective Chief Inspector Jane Tennison mysteries. A total of nine absolutely riveting full-length tales, plus lots of great bonus goodies. Honest to golly, this may be the greatest police drama ever put on the telly. You’ll thank us.

Christian Slater and Brendan Fehr do a little slumming in this nicely done sci-fi actioner set on the moon. That’s where their military base is hit by spore-infected meteors, releasing shape-shifting predators upon the defenseless astronauts — and the Earth is next! As the central character who first becomes infected — or does she? — comely Canadian actress/comedienne/model Amy Matysio (“inSAYSHAble”) seems to be having a ball. Lots of fun.

Right up front: We’ve never thought that much of the F. Scott Fitzgerald book, and the oft-filmed movie versions have done little to change our view. Putting that aside, this high-art retelling is original and much more lively and entertaining than its predecessors (if a little gimmicky) as Leonardo DiCaprio, Tobey Maguire and Carey Mulligan wallow in 1920s grandeur, excess, jazz and destructive behavior in pursuit of the American Dream and a bit of tail (or is that redundant?). DiCaprio and Mulligan were both nominated for Teen Choice Awards, so you know it has to be good.

These subtitled Italian-language dramas have never been seen in America, an oversight we’re determined to correct. Inspector Federico Vivaldi (Lando Buzzanca) is a hard-boiled detective with issues: His wife has left him, his cop son is gay, he doesn’t have the time or interest to learn all the fancy new techniques and technology on the rise, and someone is always trying to take over his beat. But it’s his resilience and resourcefulness that makes it all so watchable as he joins forces with his tech-savvy son, forging an unstoppable team (and possibly luring his wife back into the fold). And unlike most cop shows, this isn’t another murder-of-the-week mill; some of the best cases involve human trafficking and a particularly grisly form of insurance fraud. Recommended for the adventurous.

The first subtitled, full-series release of this rare 2003-04 French cop drama starring Alain Delon, whom we fondly remember as William Wilson from 1968’s infamous Poe-inspired “Spirits of the Dead.” He plays an aging former cop, resurfacing 25 years after a ruthless mob boss put a price on his head. Frankly, we’re not big Francophiles, but this we liked: A restrained mix of strong, interesting characters forged in the days of the deadly French Connection, trying to deal with a new generation of ever-more violent thugs — their own children!

This is one of those “big stars get together and make a silly-assed movie just for giggles” movies, which as a rule are gangs o’ fun. This one stars Paul Walker, Matt Dillon, Brendan Frasier, Vincent D’Onofrio, Chi McBride, Elijah Wood, DJ Qualls, Ashlee Simpson and others, with a plot — as if it mattered — about a lost wedding ring that spawns a frantic quest by a rag-tag bunch of misfits, druggies, naked people, white supremacists and one washed-up Elvis impersonator. Loads of low-rent laughs.

Yeah, the SyFy Channel is at it again. This time Esai “Fairly Legal” Morales and Ona “Archer” Grauer are scientist-parents to a pair of only-in-the-movies “teens” when the military shoots down “something” in Puget Sound. For reasons known only to the filmmakers, that spawns earthquakes, tornados, lightning storms and other low-rent CGI drama invoking the End Of The World (a SyFy trademark). Don’t worry, it all goes back to right within two hours.

At first glance this sounds like every other “stag party gone too far” flick of the last decade — most of them inspired by “The Hangover” movies — but this is one takes a different turn. Here, bachelor Donald Faison, who has been the source of many truly outrageous party pranks (some of which have clearly gone too far), finds himself the groom and is clearly frightened at what kind of payback his buds have in store. With curvy Eva Amurri Martino, who made a very memorable stripper in “Californication.”

This charming French animated piece is utterly timeless. Within an unfinished oil painting live three types of characters: painted, partially painted and sketched. And they suffer from what might be called “racial tensions” that can only be resolved, they believe, by finding The Painter and having him complete the painting. Thus starts an odyssey of discovery — including a number of destroyed paintings! What can it all mean?

Andrew Lincoln continues his reign as the reluctant leader of an ever-changing band of survivors, always on the alert for attack by the Biters. But this season the greater threat comes from other survivors, some of whom are trying to establish a new form of society, using fear of the Walkers as a means to power. David Morrissey is perfect as the new self-proclaimed governor, but the real stars of the series remain the blissfully non-CGI, old-world zombies, evoking the rotter heydays of the ’80s from films like “Return of the Living Dead.” TV doesn’t get any better than this.