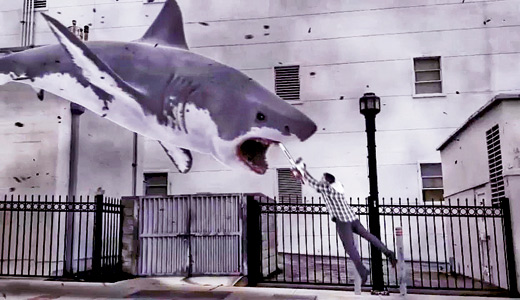 A legendary over-the-top teen horror-comedy about a shiftless slacker whose right hand is taken over by the devil, causing all sorts of comically horrible things to happen to friends and family. Yeah, it kinda fizzles a bit near the end but still has some unforgettable moments, including a rousing performance of The Ramones’ “I Wanna Be Sedated.” Stars a young Devon Sawa, Seth Green with a glass bottle sticking out of his head, Elden Henson keeping his head on straight with duct tape, Vivica A. Fox, and 17-year-old Jessica Alba in her undies. Now on Blu-ray!

The SciFi Channel’s supplier of bad CGI films, “The Asylum,” has outdone itself with this exceptionally stupid and, yes, entertaining tale of West Coast super-storms that suck thousands of sharks into the sky so they can rain down on — and devour — unsuspecting, and probably unpaid, extras. There’s also a plot involving hot bikini-waitress Cassie Scerbo, boss Ian Ziering, “actress” Tara Reid and John Heard, slumming, though it never gets in the way of the story. Too asinine to take seriously, this has become something of a cause celebre among bad movie fans, even making a late, unplanned release to theaters. Yes, it’s that bad. We loved every minute.

Timothy Spall (Harry Potter’s “Wormtongue”) is sublime in this laugh-out-loud Limey series based on the Blanding’s Castle stories of P.G. Wodehouse. He’s the eccentric earl of the castle, a crumbling pile that should long ago have been pulled down — but such things simply aren’t done. Jennifer “Ab Fab” Saunders is his angry, evil sister, Lady Connie, who hates everything about him, especially his beloved pig, The Empress. A roundup of Britain’s best (including Mark Williams, hysterical as the butler) completes the cast in high style, with scripts deftly written by Guy “Poirot” Andrews. A new classic for the ages as only the Brits can do it.

A trio of McGuires are desperate to keep their grandfather in a crumbling east London nursing home, so they hire a pair of dim-bulb “experts” to help them rob a bank. Meanwhile, at a nearby construction site, diggers break open a long-sealed vault full of bloodthirsty zombies. Don’t you hate it when that happens? But it’s all played for gore-covered laughs in a Guy-Ritchie-meets-“Shaun of the Dead” sort of way, with a cameo by Honor Blackman. Lively and fun, don’t miss it.

We really liked the idea of this Starz series: Explore the (unknown) life of Leonardo da Vinci as a dashing young man. Lots of ecclesiastical intrigue, swordplay, nude models, sexual conquests and other assorted, shallow ratings-fodder compete with deep thoughts and brilliant insights as hunky Tom Riley and leggy Laura Haddock bump uglies and explore a world that’s simply not ready for his amazing gifts. Consider this: You might also be a genius in the making, just too stupid to recognize it. Gangs of fun.

FROM UP ON POPPY HILL

Hayao Miyazaki, who charmed the world with “Spirited Away,” brings another completely original, brilliant, hand-drawn coming-of-age animated drama to the screen. A pair of young innocents, timidly awash in the thrill of first love, circa 1963 Tokyo, join together to save their crumbling high-school clubhouse from the Olympics wrecking ball. With English voices by Sarah Bolger and Anton Yelchin, this is less ethereal and more reality-based than some previous works — and it’s not in the same league as his masterpiece, “Princess Mononoke” — but satisfying.

NOW YOU SEE ME

We never saw a caper movie with more entertainment potential: Four attractive, charismatic magicians — Jesse Eisenberg, Woody Harrelson, Isla Fisher and Dave Franco — appear to magically rob banks and billionaires of tons of cash while on stage, blowing the money out for the audience to share. What’s up with that? Cops Mark Ruffalo and Mélanie Laurent are stumped, so they bring in Morgan Freeman to ’splain it all. We forget what Michael Caine is doing, but it’s all clever and upbeat for a while. The ending sucked. You want magic? Watch “The Prestige.”

A lighthearted, almost comic look at one of the world’s most secretive and exclusive organizations, The Court of Master Sommeliers. Ever wonder who declares a wine as “good” — considering that they all basically taste like fruity rat piss gone bad? Well, the Court does, and to join it you must pass their brutal Master Sommelier Exam, just as the four wine-geeks at the heart of this doc are attempting to do. For a laugh, check out the fake reviews on rottentomatoes.com, all written in pretentious wine-speak. We liked it.

Lexington lad Michael “General Zod” Shannon plays real-life mafia contract killer Richard Kuklinski, a subhuman monster responsible for the violent deaths of at least 100 people — though no one in his otherwise quiet household suspected a thing! Shannon is outstanding in this brutal film that quite literally doesn’t pull any punches, as are Winona Ryder, Chris Evans, Ray Liotta and even David “Friends” Schwimmer. But a special mention should go out to youngsters McKaley Miller (“Hart of Dixie”) and Megan Sherrill as his very believable daughters. A minor masterpiece that deserves a larger audience.

THE LORDS OF SALEM

Horror-obsessed rocker Rob Zombie’s latest chiller stars Sheri Moon Zombie as a Salem radio DJ who receives a mysterious, haunted “record” (i.e., a pre-CD physical sound recording medium made of vinyl). Listening to it evokes violent visions of the witch-hunt era. The message is clear: The lords are returning for revenge, intending to plunge our world into insanity, chaos and blood-soaked darkness.

Colin Firth is a sad and unhappy middle-aged man who fakes his own death to buy a new identity as “Newman.” But his resurrection plans take an unexpected turn when he meets Emily Blunt, another wounded soul, and together they make a new life breaking into empty houses to take on the identities of the owners. But are they attracted to who they are, or who they were? Yeah, it’s all deep and artsy-fartsy, livened by a nice shot of Blunt’s pale bum in the last 10 minutes of the film. We liked it.

In lesser hands, this gay-marriage/immigration potboiler would have come across as trite and cliché, but writer/producer/star David W. Ross makes it moving, funny and entertaining. He’s a gay English photographer in America who takes care of his deceased brother’s wife (Alicia Witt) and daughter. But when his visa expires, he must find a way to stay — legal or not.

Tobias Segal (last seen in a small role in “MIB3”) is Charlie Petunia, a guy with a family from Mars and more than a few issues of his own, who is currently very busy at his brother’s wedding, trying hard not to talk to anyone. Especially those attractive, formal-attired young men catching his eye. But this is an ensemble piece wherein all of the various Petunias — Thora Birch, Christine Lahti, David Rasche, Brittany Snow, etc. — get to bounce off each other’s emotional armor, crash, and hopefully come back together stronger. Better than it sounds.

SCATTER MY ASHES AT BERGDORF’S

Bergdorf Goodman’s, Manhattan’s long-time bastion of fashion, reveals its lacy bloomers in this rather historic doc that goes behind the scenes of America’s self-styled cultural leader. With everything from their iconic high-art window displays to the legendary parties to the executive offices where fashion industry leaders come to grovel and make billion-dollar deals, this is a Stylista’s wet dream. Talking heads include the Olsen twins, Susan Lucci, Candice Bergman, Tom Ford, Rachel Zoe, Diane von Fürstenberg, Vera Wang and more.

Sexy Lacey Chabert can’t seem to find a guy — so you know this is a work of fiction — and her friend’s upcoming wedding only makes her feel worse. That’s when former boyfriend and hunky rock star Kip Pardue (“Mad Men”) wanders back into her life and she begins to hope for love, yet again. The only problem? He’s already hooked up with her best friend, Jenna Dewan (“American Horror Story”). A stupid chick-flick with an exceptionally attractive cast.

This latest Japorn classic from fabled Nikkatsu Studios, about an overworked would-be nurse who becomes the object of desire for an obsessive sex-addict, is full of the usual nudie escapades, but stars Mina Asami. Who? Well, true uber-geek fans of all things Power Rangers will recognize her as Princess Ial from “Hikari sentai Masukuman”, the eleventh series in the famed Super Sentai TV franchise. And those giant-monster battles from The Power Rangers? They were actually spliced in from various Super Sentai battles. See what you can learn when you read?

Londoner Simon Rumley has carved out a niche for himself as a brilliant writer and director (including a recent segment in “ABC’s of Death”), one of the leading lights in Britain’s burgeoning dark-drama urban-indie movement. His breakout film was 2000’s “Strong Language”, a mockumentary of sorts that introduces us to 16 young people discussing everything from AIDS to Ecstasy, all bound by a single night of terror. “The Truth Game” and “Club LeMonde” followed (all three now available on American DVD) cementing his place as a visionary talent with an eye for dialogue and the ability to present profound topics in very personal terms. Recommended.

This final season features some of the Zone’s absolute best stories, include William Shatner’s “there’s a monster on the wing!” classic “Nightmare at 20,000 Feet,” the revenge-on-greedy-relatives horror of “The Masks,” and one of our all-time favorites, “A Kind of a Stopwatch,” about personality-challenged man who is given a stopwatch that can halt time. While five seasons of great TV is nothing to sniff at, it’s a shame that it ever had to end; it just kept getting better and better and …

Originally titled “Notre univers impitoyable,” a pair of French lawyers, Jocelyn Quivrin (who is a guy) and Alice Taglioni (who is most definitely NOT a guy!), are privately a couple, working together at a large consulting firm. But when they find themselves in competition for the same promotion, they begin to re-think their lives and relationships. Frankly, it’s much deeper and far funnier than we can express here due to a great script and deft direction. A good date movie if you don’t mind subtitles; check it out.