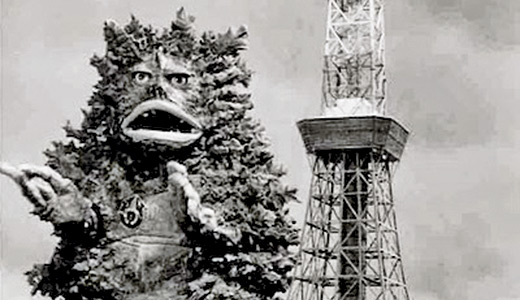 Gerard Butler plays this silly actioner completely over-the-top, as it should be. He’s a former White House guard, now disgraced, whom fate picks as the president’s only hope of rescue when a sinister terror mastermind (Rick Yune) takes the White House. From there on, this is just “Die Hard” for the ’10s, with Butler doing a John McClane, quipping his way from action scene to action scene with Morgan Freeman in the background for gravitas, and Harvey Dent, er, Aaron Eckhart, as the prez. Big dumb fun at its best; don’t miss it.

Never heard of this? What about “Ultraman”!? “Ultra Q” was its prequel: the first-ever monster-of-the-week TV show from “Godzilla” effects master Eiji Tsuburaya, recycling many of Toho’s best suitmation stars — including Godzilla (here as “Gomess”), King Kong (“Goro”) and Baragon (“Pagos”) — to create all new oversized creatures, rampaging in classic Kaiju style. Never broadcast in North America, long the Holy Grail of monster-nerds, this fabled nonsense is now available for the first time on these shores in a complete, 28-episode set in its original b&w with blessed English subtitles as God intended. An absolute must-own!

Many have claimed to be the inventors of punk, but for our money, that band was Death, a trio of African-American brothers in the early ’70s who, while musically no better or worse than the other 10,000 bands in Detroit, could divide their audience into two distinct camps: those intimidated by their aggressive, savage, over-the-top style, and those who embraced it — there could be no middle ground. This is the story of that band and how its artistic life was cut short by the popularity of Motown and the evils of disco. Part music doc, part family drama, part American history, all upbeat, original and exciting.

If you go into this expecting a full-moon lycanthropic romp, you will be disappointed. The original Korean title of “Wolf Boy” is far more accurate, as this is the melodramatic tale of a feral young man, living wild in the woods until discovered by a mother and her two daughters. Make no mistake: The teen is a beast — frightening, dangerous and unpredictable … and possibly not even human. But in time, he develops a friendship with Suni, one of the daughters, which raises the jealous ire of the landlord, Ji-tae. A moving, emotional and mature film for teens, young adults and anyone looking for something different.

Tommy Lee Jones hams it up as Gen. Douglas MacArthur, with help from Matthew Fox and master thesp Toshiyuki Nishida, in this historical retelling of the aftermath of WWII. MacArthur finds himself the reluctant ruler of Japan and must decide what to do with the former emperor, the man who declared war on the U.S.: Have him shot as a war criminal, or spare his life, which would shame the Japanese people? Fox, an expert on both Japan and psychological warfare, quietly helps him decide.

We have to give the creators of this stereotypical gore-thriller franchise credit: They know how to keep the audience coming back for more. Gorgeous Danielle Harris returns to destroy the unstoppable axe-killing sociopath, Victor Crowley (Kane Hodder), hiding deep in the Louisiana swamps. She rejects joining an army of heavily armed mercenaries, teaming up instead with cop Zach Galligan and his ex-wife, Caroline Williams, who may know the secret to stopping the murderer once and for all.

This is a fun little bit of sci-fi aimed at the YouTube generation. A secret government force called the Asteroid Management Initiative monitors the skies for death-dealing asteroids, blasting them away when they pose a threat. It’s populated by a bunch of lazy slackers who learned their mad piloting skills playing vidgames … and they are bored, bored, bored. Imagine “Clerks” meets “Armageddon” with lots of profanity and crude practical jokes. Stars Andrew “The Conjurer” Bowen, Felicia “Werewolf Hunter” Day and a host of Kevin Smith alums.

THE COMPANY YOU KEEP

Robert Redford makes a far-too-rare screen appearance as a good-guy lawyer and single dad making the world a better place for all. That is until immature, hotshot reporter Shia LeBeouf, out to make a name for himself, discovers that Redford was once a radical anti-war activist and is still wanted for murder. Thus begins a cross-country race with Redford hooking up with his old Weather Underground friends, the FBI close on his heels. A flawed movie, to be sure, but one that will make you think twice when you hear the word “terrorist.”

THE EXTRAORDINARY ADVENTURES OF ADELE BLANC-SEC

Master fantasist and storyteller Luc Besson (“Fifth Element”) is at the top of his game in this wild adventure that begins with a 136 million-year-old pterodactyl egg hatching in a 1912 museum. Our heroine, a French female Indiana Jones — played with catlike grace by beautiful Louise Bourgoin — is completely unfazed. This wild and wonderful adventure, based on the works of Jacques Tardi, is everything that “Tintin” wanted to be, but with far more droll, wisecracking humor and an earthy pulp-fiction plot. Truly ageless: an epic adventure that everyone can enjoy, regardless of their birthday count.

Julianne Moore and Steve Coogan are bickering, unlikeable parents, locked in a to-the-death custody battle for 6-year-old Maisie (Onata Aprile). Frankly, the adults get old real quick as they wage an ever-escalating war of self-involved jackassery “for the good of the child.” But Maisie doesn’t care. From her innocent point of view, her parents are simply being silly: the world around them is a wonderful place filled with love, charm and grace. She will lead them to find that again.

Freckly Erin “Alphas” Way is perfect as the expectant mother-about-to-be whose baby simply disappears from her womb in this unusual and very original indie horror/thriller that borrows cliches from the found-footage genre to delicious effect. Husband Eric Matheny and brother Ryan Smale whisk her away from the public eye, only to discover that whatever took her baby isn’t done with her yet. Nicely icky, very original and scary as hell in spots. Recommended.

This poorly-titled animated wildlife adventure got lost in the wave of animated wildlife adventures of late (“Rio,” “Epic,” etc.), which is a shame because it is by far the most accessible. An adventurous young falcon goes in search of the fabled bird city of Zambesia, unaware of the machinations of an evil lizard who plans to make the city his own. With voicework by Jeremy “The Bernie Mac Show” Suarez, Samuel L. Jackson, Abigail Breslin, Jeff Goldblum and Leonard Nimoy. A fun ride, especially for younger kids, with a moral.

In a dystopian near-future where people are so celebrity obsessed that fans inject themselves with famous people’s viruses in order to share their diseases, a lab worker must discover what killed a superstar (Sarah Gadon, “A Dangerous Method”) in order to save his own life. Directed by Brandon Cronenberg (son of David C.), this is an interesting tale with an attractive cast and fun cameos. Recommended.

The final season of one of the most-watched series of the ’60s: a violent, unrepentant tale of American soldiers, carving their way through Europe, knife-in-teeth, that would be right at home among today’s most popular cable series. Vic Morrow and Rick Jason return with a truly magnificent cast, including guest stars like Claude Akins, Wayne Rogers, Bill Bixby, John Considine, Sal Mineo and Ted “Ted Knight” Baxter. Eight discs; more than 25 friggin’ hours of ballsy WWII drama.

Fourth season of the most underrated comedy TV series around today, centering on Joel McHale as a disbarred lawyer who must attend a goofy community college in order to return to practice. There he meets all manner of oddities including Chevy Chase, John Goodman, Ken Jeong and breathtaking Alison Brie. This senior year season may be the most inventive period of any comedy in modern history as the action veers from a whacked-out sci-fi convention, to a succession of brutal holidays, to … puppets? Seriously demented.

ERRORS OF THE HUMAN BODY

This German-made English-language terror is just plain icky, if very effective. A genetics researcher, haunted by the death of his son, learns from the tragedy, discovering a “human regeneration gene” with great medical potential. But the strain of it all leaves him on the brink of madness. Are his coworkers and lovers conspiring to use his discovery to create a devastating virus? Is he already infected? Well, duh! Good stuff.

Angela Kovacs — still a knockout at age 49 — stars in this subtitled Swedish cop series as Detective Inspector Irene Huss, former European ju-jitsu champion, seasoned expert on violent crime, and mother of two teenage daughters. Simply put: This lady is someone you simply don’t mess around with. From the pen of crime-author Helene Tursten, Irene lives in a nightmare world of serial killers, pedophiles, psychotics and degenerated men, some who wield political power. But somehow she brings a human touch to the chaos, accepting the burden of the grieving families, shielding her own from the horror (most of the time), and turning all this negative energy into a fury that’s impossible to contain. Very entertaining, believable and — lacking American censorship — truly shocking.

Famously regarded by many as the absolute worst movie ever made, this updated Hope and Crosby road picture gained its reputation largely on the non-chemistry and strained banter between stars Warren Beatty and Dustin Hoffman. But in hindsight, it’s really not that bad; an imperfect experiment to be sure, but surprisingly well-written and laugh-out-loud funny in spots — and it’s a real hoot watching these two master thesps so far out of their element. Now on Blu-ray.

The “Schoolgirl Report” series, a collection of renamed, badly dubbed German comedy/porn films, originated around 1970 and have enjoyed a resurgence in popularity in the DVD era. This particular volume began as “Smarty Pants” for director Walter Boos, who was a one-man factory for this sort of thing. Lots of tall, bosomy blonde female “students” hear lectures on morality and social taboos between anthology-like soft-porn escapades, climaxing (ha!) in a truly hilarious vignette about young lovers who pretend to undertake a noisy “Exorcist”-like ritual upstairs to cover up their lovemaking — while her parents listen downstairs, horrified at the demonic carnage! Priceless, harmless and tasteless.

This historical Chinese martial-arts/warfare movie is one of the most entertaining we’ve ever seen. A devoted, secret assassination squad uses a lethal “flying guillotine” to eliminate Emperor Yong Zheng’s most violent enemies, ensuring a fragile peace. But they become expendable when a new emperor takes the throne, one who believes more in firearms than cold steel. Chess-like in his machinations, the new emperor leads the squad into a trap that will spell their end and give him absolute power over all who oppose his reign of terror.