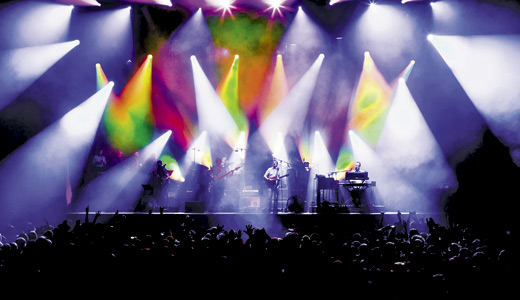 Umphrey’s McGee has been playing to an ever-widening audience since 1997, with a stable lineup for the past decade. UM loves to stretch out in concert and features an arsenal of lighting effects adding to the atmosphere. Relix magazine featured UM on a recent cover with the headline, “Will They Be the Last Jam Band Standing?”

Joel Cummins, who sings and plays keyboards, was enthusiastic about the band’s forthcoming tour, kicking off Thursday in Louisville. Cummins says about being labeled a “jam band,” “‘Jam band’ is certainly one of the things we are, but I think that we’re also many other things.” He says there’s also a lot of heavy rock, metal and prog rock in their playing together. “Somebody created a term for us, and they called it ‘improg,’ and we definitely like that.”

One secret to their success and longevity is maintaining a unique sound that makes pigeonholing difficult. “We like to keep that unexpected feeling of coming to an UM concert and not knowing exactly how things are going to go, or if it’s going to be a night more oriented toward rock or punk or dance — we have all of those personalities as a band,” says Cummins. “I think it’s fun to be able to morph from night to night and really feel the crowd, and figure out what it is that’s going to work best on that given night.”

One aspect Cummins enjoys most is knowing that UM’s audience wants them to take chances and not play it safe. “It’s really cool to be able to go up and not have to play the same set of music every night, and really let our personalities and the feel of the show guide us.”

While both the song structures and the band’s innate love of improvising create an environment where anything can happen musically, the band does write out set lists before each show. Cummins say the band has an outline of what they plan to do, but it’s not always what ends up happening. Different band members make up separate lists, which Cummins calls “a very sound thing, because then there is less predictability in how things will go.”

“We all have our things we tend toward doing,” he elaborates. “I’m definitely into finding a song or two for each set that’s a little more obscure and digs a little deeper in the catalog. We have so much material at this point that there are some really great songs that are only played seven, eight times a year, and I definitely want to keep those in the rotation.”

The members have moved apart geographically as they have started families but set aside time for getting together and working on new material in the studio. “We typically get a lot of rehearsing on the road, whether it’s working on new originals, or new covers, or just exercises as a group to tighten up. It’s something we take very seriously,” Cummins says. “We have the freedom to be in different places, and that seems to be working — everybody’s happy and it’s more personalized. It’s a good balance at this point, being on the road and then being home, and I think that’s going to be good for the longevity of the band.”

On this tour with STS9, the bands will alternate opening slots, both playing full sets. Asked what he liked about STS9, Cummins laughs, “I don’t like anything about them.” More seriously, he continues, “They’ve become great friends of ours. We’ve got a lot of respect for what they do. As a band, they take chances. There’s a crossover in our fan bases, but there’s a potential for both bands to make some new fans, and that’s exciting to both of us.”

“Musically, it works, because they’re really fun, intense shows, with light shows and production,” he continues. “This is definitely going to be the biggest production we’ve ever taken on the road, and being able to play the Palace for the first time is an absolute thrill. I love the feel of mid-size indoor theaters. It’s going to be a fun tour: on the road with guys you’re good friends with, some jokes and pranks, and probably some sit-ins. In fact, STS9’s bassist played with us at Camp Bisco because our bassist was with his wife delivering a baby.”