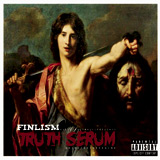 A family affair, producer Paul “Finlism” Finley built the tracks while his 14-year-old son Damian mixed and mastered a Whitman’s sampler of the city’s nicest emcees for the excellent Truth Serum. Truth hearkens back to the great producer albums of the 1990s, Pete Rock’s Soul Survivor and Muggs’ Soul Assassins. The comparison works, with the brooding, sample-based production fitting well in that era’s mode. The ever-underrated Actual People frontman CJ Prof murders “Beezwax,” and Nacirema unsurprisingly takes “Buck Rodgers” to the stratosphere. It’s been too long since we’ve heard from Polio, but hopefully “No Mistake” is a promise for more very soon. Basement Up’s Allen Poe has never sounded better than on “The Polygraph.” In 22 cuts, there are a couple skippers, but this is a Serum you’ll gladly inject time and again.