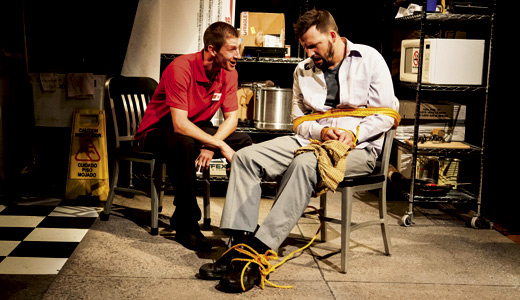 ‘Edgewise’
A Theatre [502] production. Directed by Mike Brooks. Continues through Aug. 24 at the Clifton Center, 2117 Payne St. For tickets and more info, check out theatre502 .org.

Fast food and slow terror make for an unsettling and provocative theater experience in Eliza Clark’s “Edgewise,” now running in a Theatre [502] production at the Clifton Center.

Somewhere in New Jersey, a trio of teens are frying fries, grilling burgers and tending to drive-thru customers while just outside the door a war is playing out. The audience never really knows what sort of war this is, apart from a few murky details we glean over time. We learn that there are conscripts and there are traitors. We learn that bloody battles are being fought in nearby streets. We learn that the war — which at first was projected to involve only a summer campaign — has been going on for eight years.

Scenic designer Braden Blauser places the action behind the scenes in a fast-food kitchen and stock room that’s pretty much completely equipped — and the audience, seated on the Clifton Center stage, gets a close-up view of all the goings-on, which include raunchy teen banter (think “Clerks”) and scenes depicting harrowing moments of cold-blooded cruelty.

It’s Clark’s juxtaposition of ribald wit and dark psychology that gives “Edgewise” its startling power. The youngsters are as plausible as can be. There’s Ruckus (Michael Mayes), whose father has recently appointed him store manager and who is happily lording his new power over his minions, humiliating and abusing them while he fantasizes of the day when he can join the military and start killing traitors. His minions are earnest Marco (Ian Weber), who is horrified and grief-stricken by the war, and Emma (Casandre Elyse Medel), the most dutiful and competent of the bunch, and whose mother has just been called up for service.

They bicker and tease, trying to maintain a sense of normalcy until explosions rock the restaurant and their communications are cut off.

Shortly thereafter, a wounded man named Louis (Eli Keel) stumbles in and collapses. Ruckus concludes that Louis is a fugitive traitor and sets out to restrain and interrogate him — not only because it’s his patriotic duty, but also because of the attendant glory. And we watch as weak moral principles fall prey to fear and power, and the other teens become unwilling accomplices.

Then another mystery man, Paul (JohnBen Lacy), arrives with an ingratiating smile and questions that ratchet up the tension.

It’s a study in wit and fear. And though some of the comic jabs are incongruous (drive-thru orders while air strikes are going on nearby), the play seems to capture something authentic about the drive for normalcy and distraction when the world begins to crumble. Though set in New Jersey, the story or a variation could take place any place where civilians are trying to make a life while bombs fall and fear rules the day.

Director Mike Brooks and his company tackle the play with raw conviction, and the performances — especially Michael Mayes as the domineering, pathologically patriotic Ruckus — are equally compelling in moments of humor and pain.