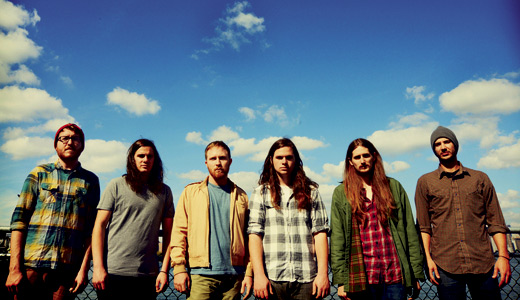 Summer’s heading in to its last movement, so take advantage of the sun tonight and enjoy one of Waterfront Wednesday’s best offerings of 2013. Local soul man Justin Paul Lewis opens the show at 6 p.m., followed at 7:30 by one of the finest singer/songwriters operating today, the very English Laura Marling. Often compared to Joni Mitchell, Marling is 23 and has already issued four albums of mature-beyond-her-years material. While she offers a quieter, more contemplative set, final act Sons of Fathers bring a Texas take on the timeless, harmony-driven folk-rock familiar to fans of The Byrds or the Avett Brothers. As a whole, the bill offers a diverse representation of what public radio has to offer. —Peter Berkowitz

‘Beyond’ by Eric Phagan

“As a child, I remember being interested by things I couldn’t fathom,” says Eric Phagan. “I created my own stories by creating images to help me understand and remember the way things were as I saw them. I have always been interested in the unusualness of the objects that surrounded me, an unusualness that is not commonly seen as beauty.” That’s the way Phagan became an artist, by dissecting his world. His new exhibition, “Beyond,” shows that he’s still doing that, as well as taking it a step further by trying to understand the afterlife. To see his paintings, drawings and sculpture, rush down to the Tim Faulkner Gallery by tomorrow — the closing reception is from 6-10 p.m. The gallery is also showing new wall sculpture by Kerri Meringer. —Jo Anne Triplett

The Back Door & Monkey Wrench

The living dead will once again rule the Highlands when the Zombie Attack returns for its ninth year. Things get started with a pre-attack party at The Back Door (1250 Bardstown Road) that will feature a showing of “Return of the Living Dead,” which is set in Louisville. At 8:29 p.m., the Zombie Attack begins as participants make their way to The Monkey Wrench (1025 Barret Ave.). The festivities continue with a costume contest, music by Squeezebot, OK Zombie, Vice Tricks, Bibelhauser Brothers, and a performance by the burlesque troupe Va Va Vixens. Can a zombie be sexy? This year, organizers are asking for help raising one-third of the operating budget for Zombie Attack, so have your donations as accessible as your fake blood. —Michael L. Jones

A trendsetting Louisville-raised musician, an MFA-level professor, author and prolific collaborator, David Grubbs has done a lot. At this intimate Greenhaus performance, Grubbs says hi to the old neighbors while promoting his latest solo album, this spring’s The Plain Where the Palace Stood; it’s his latest version of “pop” music (as opposed to his more academic and avant-garde other works). Though one can never be sure what to expect from the multi-faceted artist, assume there will be fancy guitar fingering on display, alone worth the price of admission. Opening act Visiting Nurse is a new local group (including LEO contributor Syd Bishop) inspired by the IDM/electro synthetic sounds of acts like Boards of Canada. Also remember to buy some plants and/or couches in between sets. —Peter Berkowitz

“For fans of My Morning Jacket” has the been press release tag line for Roadkill Ghost Choir this summer, which might go toward explaining why they’ve played here three times this summer already. Whether or not MMJ fans (a large and diverse group, considering how that band has evolved over 14 years) are on board, the poetically named RGC are back to win us over, one at a time (the door-to-door tour surely comes later). The Orlando-area sextet came together in 2010, inspired by Dylan, Gram Parsons, Wilco and Fleetwood Mac — and Radiohead and Nirvana, to complicate matters — and have pledged to keep rock music alive, with a return visit to Zanzabar in October already scheduled. —Peter Berkowitz

Ah, Paris: The City of Lights, the City of Love, the City of … Absurdist Theater? For 56 years, the Théâtre de la Huchette (or Breadbox Theatre) has continuously shown Eugene Ionesco’s bawdy romp of a comedy, “The Bald Soprano,” the first play ever written by this French-Romanian pioneer of the Theatre of the Absurd. The production, which received the prestigious Molière d’honneur, has been seen by more than a million audience members, making it one of the most performed plays in France. Luckily, for those of you not wishing to drop $1,000 on a plane ticket, Savage Rose is bringing this one-act to The Bard’s Town this week. With eight performances packed into just two nights, tickets for this limited engagement are hotter than a freshly baked croissant. Berets and mustaches optional, je ne sais quoi and joie de vivre required. —Jennifer Harlan

For 12 months now, I have been trying to replicate the lunch I had at the decennial WorldFest last year. Best described as a plump wiener topped with pineapple, potato chips and a special sauce, a Colombian hot dog sounds simple enough to make, but I haven’t been able to replicate the magic of that festival dog. Who knows what wonders await you and me at this year’s WorldFest? The cultural celebration returns this holiday weekend for four days of food, products, clothing and performances from countries both near and far. Admission is free, but canned food donations will be accepted for Dare to Care food bank. —April Corbin

Adding bourbon to something is never a bad idea — unless it’s breast milk or your gas tank, I suppose. Anyway, the annual Kentucky Bluegrass Festival is now adding bourbon to its name and celebrating the Kentucky staple. So now the three-day fest will not only pay homage to our musical heritage but also our spirit of choice. “Bluegrass music and bourbon are synonymous with Kentucky,” says Jennifer Washle, promotions manager for Bisig Impact Group, which puts on the fest. “Bourbon is a true Kentucky favorite, so we’ve added it to our festival and the event’s namesake because of the rich tradition and proud history.” This year’s lineup includes Russell Moore & IIIrd Tyme Out, Dave Adkins & Republik Steele, The Roys and many more. —Sara Havens

Have you been bored lately? Sullen, itchy, perhaps a bit constipated, even? Well, shit, dawg, there is hope for you, and late on a holiday Monday night! The Dirty Bourbon River Show bring what they call “authentic New Orleans-fueled world music mash-ups with gypsy gumbo horn beats, barb-wire ballads and barroom shanties” to our equally bourbon-fueled streets, and no arms will remain crossed when they do. Fans of Gogol Bordello and Manu Chao should pay extra attention to the call to come dress up, jump and dance around, as bands like this don’t come through Louisville often enough. (Note to Forecastle: Add this to our wish list for next year, please.) We’re not saying they’re manic, but they’ve released seven albums since 2010. —Peter Berkowitz

‘Creativity Through Form and Function’

If you’re into ceramics, The Gallery on Pearl should be on your “check it out” list. John Guenther is one of the co-owners, but in his “former life,” he was a ceramics professor at Indiana University Southeast. He knows his stuff, and his eyes serve him well when it comes to curating art shows. While I have found the gallery does features high-quality clay, their exhibitions do not show favoritism among the art media. For example, The Gallery on Pearl’s current show, “Creativity Through Form & Function,” features regional artists Steve Goodwin, Joe Oberhausen, Cheryl Ulrich-Barnett and Kerry Zimmerman. Goodwin and Ulrich-Barnett are ceramicists, but Oberhausen is a woodworker and Zimmerman does blown glass. So, go there for the ceramics, but be prepared to be enchanted by something else. —Jo Anne Triplett