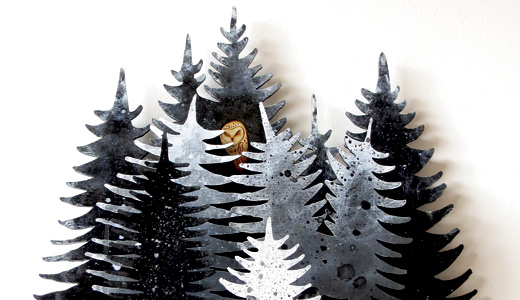 Elephant Stone has been gaining traction in the psychedelic music scene. The Montreal-based psychedelic rockers have embarked on their summer tour, having opened for The Zombies and The Black Angels earlier this year. Their second album, self-titled, sounds like something inspired by George Harrison’s late-’60s/early-’70s compositions with The Beatles and on his early solo albums. “Heavy Moon,” a sitar-heavy track from the new album, provides a mystic sound showing how classical Indian music has influenced their sound — the track is beautifully layered with an electric organ to make listeners go into a calm, relaxing state. Elephant Stone will be performing with local electro-folk band Whistle Peak. —Charles Bowles

Making a lasting impression on the “RuPaul’s Drag Race” audience isn’t easy — the reality show has more drama queens and (literally) colorful characters than it knows what to do with — but Carmen Carrera left one. Maybe it’s because she’s so beautiful in drag, straight males will admit they wouldn’t turn down her advances. Maybe it’s how close to naked she gets whenever possible. I like to think her earnest post-show coming out as transgendered and the body-positive message she sends is also a factor. Either way, Carmen hosts “Hard Candy” this week. Sashay that way for performances at 11:30 p.m. and 12:30 a.m., or show up an hour early for an open bar and meet-and-greet session. —April Corbin

Hellfire! It’s time for the state fair! Where else can you see gluttony in all its glory — whether it’s served like a hunk of beef between Krispy Kreme donuts or deep-fried like a Twinkie? But before you eat, stop by the numerous barns full of savory creatures that you can touch before they’re thrown into any fryer. As always, there’s an impressive lineup of live music during the fair’s two-week run, including Toby Keith (Aug. 17, $45), Carly Rae Jepsen (Aug. 16, $45), Vertical Horizon (Aug. 15, free), En Vogue (Aug. 16, free), the Oak Ridge Boys (Aug. 18, free) and lots more. As a resident of this here state, you’re just about legally required to partake in a corndog, a cup full of fries and a few beers, and to dance in the Budweiser tent like nobody’s watching. —Sara Havens

What will be my lasting legacy? That’s the question tackled in CenterStage’s latest offering. “A New Brain” follows a talented young songwriter who has a near-death experience while writing for a children’s television show. Afraid of dying with his best songs unrealized, the songwriter begins writing from his hospital bed, all while enduring medical procedures, exploring the relationships around him and discovering the healing power of art. A near-autobiographical account of Tony Award-winner William Finn’s own brush with death, the production tackles a heavy subject with a light hand, billing itself as a celebration of art and life. —April Corbin

Digital design and development studio Forest Giant lives its business life online, but its Butchertown office, located inside The Pointe complex, is a natural beauty unto itself. Their IRL home is a necessary reminder that great designers must have a sharp visual sense reflected not just in handsome apps, but in everyday life as well. For their second gallery-style show, organizer Rich Merwarth has solicited a murderers’ row of talent displaying work inspired by our (real) forests. Forty local and regional favorites in a variety of styles and forms — including Kathleen Lolley, David Cook, Dustin Dirt, Lyndi Lou, Justin Kamerer, Frank Peak, Cricket Press, Patrick Jilbert, Matt Dobson and Tyler Deeb — will be on display Friday and Saturday. —Peter Berkowitz

What’s better than Quentin Tarantino’s “Reservoir Dogs”? More “Reservoir Dogs,” of course. With chicks. As such, the Alley Theater is taking us someplace we never thought we’d go: “Reservoir Dogs” adapted for the stage, with twin casts — one male, one female. So, basically, you’ve got the indie crime flick that launched Tarantino’s career, but you’ve got twice as many suits, twice as many rats and twice as much violence. The male version will be staged Aug. 16, 23 and 30, and the female version Aug. 17 and 24. The bonus is if you see one, you get a $5-off coupon to see the other. See? There’s that double theme again. —Kevin Gibson

Actors Theatre of Louisville is throwing a party and wants you to crash it. Celebrating 50 years as a theater company, Actors hosts the ultimate block party in front of its building at Main and Third streets on Saturday, complete with live music by The Pass, Ben Sollee, Nick Dittmeier and more; interactive booths; behind-the-scenes tours of the various stages; local theater; and, of course, beer, food trucks and other treats. There will also be a prop and costume sale going on, as well as a bartender challenge to create the perfect 50th anniversary cocktail. Grab the kids and head downtown to celebrate half a century of one of our most beloved theater companies. —Sara Havens

Carmichael’s is presenting a celebration of the life of Mahmoud Darwish on the fifth anniversary of his death. Five of our local poets — Sonja de Vries, Merle Lyn Bachman, Larry Muhammad, Sheri L. Wright and Aletha Fields — are scheduled to read from among the works of this Palestinean national poet. Over a lifetime that stretched back to before the founding of Israel, he honed a wit that made for demanding reading yet had the power to unite (“Sarcasm helps me overcome the harshness of the reality we live, eases the pain of scars and makes people smile”). He balanced an understanding of universal truth and beauty with a flair for political bite — leading to a diversity of literary admirers, but difficulty in getting his writings accepted in the schoolbooks of Arab schools in Israel. —T.E. Lyons

To even begin to discuss the long and deep history of Chicago music would take several books, but for now, let’s just say the place that has nurtured talent from The Impressions to Kanye West has done it again. The modern soul octet called Sidewalk Chalk lands in Louisville a year after their debut full-length album, Corner Store, dropped, and it’s gonna be a hot August night. The interplay between MC Rico Sisney and vocalist Maggie Vagle is dreamy, flowing into surging horns and propulsive percussion (including a tapper); the band keeps moving forward but never rushes the groove. This is one definitely worth seeing in a neighborhood club now, and you’ll love them just as much when they become a favorite of the festival circuit. —Peter Berkowitz

‘Windows to Another World’

Here are two reasons for the arts in our area to celebrate: Revelry Boutique Gallery has been open for three years, and they’re exhibiting paintings by Julio Cesar Rodriguez. I’m a believer in “more, more, more” when it comes to our visual arts community. So for Revelry, or any gallery for that matter, to figure out how to handle the rough waters of commerce when it’s coupled with creativity gets two thumbs up from me. The artist for Revelry’s third-year anniversary exhibition is amazing as well. Rodriguez, who moved to America in 2007 and Louisville in 2012, is one of a handful of Cuban artists in the region that make our scene more exciting. A masterful technical painter, he certainly puts the realism back in surrealism. More please. —Jo Anne Triplett