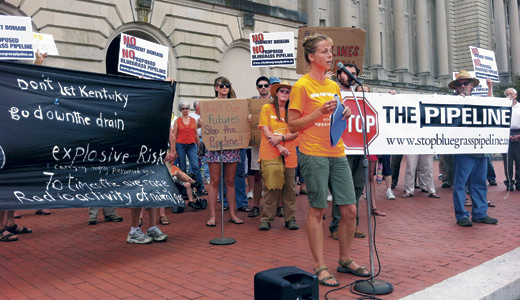 A group of roughly 100 Kentuckians from a wide swath of counties gathered at the capitol steps in Frankfort last Wednesday, rallying to voice their concerns over the controversial Bluegrass Pipeline proposal, and asking Gov. Steve Beshear to take action on their behalf.

The pipeline — a collaboration of companies Boardwalk Partners and Williams — will transport highly flammable natural gas liquids from drilling areas centered in Pennsylvania to the Gulf Coast, where most will be processed into plastic products. A new pipeline would be constructed across 13 counties in Kentucky, from Bracken in the north to Breckinridge southwest of Louisville, where it would connect with an existing pipeline repurposed for the liquids.

Speakers at the rally living near the proposed pipeline route expressed fear of what environmental devastation a leak or explosion could bring, as well as Bluegrass Pipeline’s comments on taking private property by eminent domain if they do not succeed in buying up the necessary land for its route.

The participants then headed inside to present a petition with 5,252 signatures to a representative from Gov. Beshear’s office, asking him to add two proposals to the legislative special session set to begin next week: 1) Only allow the use of eminent domain for a pipeline if it is regulated as a public utility by the Public Service Commission, and 2) Give state agencies the power to review any natural gas liquids pipelines, which currently does not exist.

However, Beshear has already said he will not take such action, stating there is not enough time to deal with this issue in the session devoted to redistricting, and the matter can be put off until the General Assembly begins next January.

Despite the reluctance of Beshear — as well as majority leadership in both the House and Senate — a growing bipartisan coalition of pipeline skeptics is forming behind these two proposals, seeking to tackle this issue before the pipeline companies move further toward solidifying their plans.

Shortly after the rally, Bluegrass Pipeline representatives held an “open house” meeting at the Frankfort downtown library — one of several across Kentucky that week — to inform the public about their project and combat “misinformation” spread by their critics.

A long line of people waited to enter a small crowded room where a dozen Bluegrass Pipeline employees waited at five separate stations to take their questions. Despite the free brownies and magnet flashlights bearing their logo, the mood of the locals was contentious, with two protesters holding up a sign touting Williams’ history of pipeline accidents next to the company’s “Safety” kiosk.

Mark Clements and his wife Mary, of Versailles, were struggling to get straight answers from Bluegrass Pipeline employee Jim Curry. “Why is this pipeline so important that you think you can come in here and take people’s land claiming eminent domain?” asked Clements.

Curry responded that they are doing their best to work with landowners, claiming some have requested the company reroute the pipeline onto their property, before stopping mid-sentence and turning to LEO Weekly. “This guy’s writing down everything I say over here.”

The Clements, as well as several other attendees LEO spoke to, expressed frustration not just at the lack of specific answers to their questions, but what they described as a “divide and conquer” format to the meeting, preventing a full airing of questions and answers in front of a large and unhappy audience.

“I don’t want to sound close-minded,” said Clements, who fears a pipeline accident could devastate the vulnerable underground aquifers in the region. “I realize there are certain things that get done in the world that are necessary for society. But I don’t want to be railroaded by big business.”

While the locals were skeptical, Bluegrass Pipeline has some big allies on their side. The company has hired one of Frankfort’s biggest lobbying firms, McCarthy Strategic Solutions, as well as the public relations firm RunSwitch, co-founded by Republican political insider Scott Jennings. And as The State Journal reported two weeks ago, the company is represented by the law firm of the governor’s son, Andy Beshear, who attended a Public Service Commission hearing with Boardwalk’s representatives in April.

But the pipeline still has some bipartisan skeptics among the state legislature, including Republican Sen. Jimmy Higdon, who represents the area where the proposed pipeline crosses Nelson County near the Marion County line. Higdon tells LEO that he and his constituents want Beshear to add the eminent domain and regulatory issues to the special session, and if the governor fails to do so, he’ll work for such an effort in next year’s General Assembly.

“I don’t think eminent domain is a partisan issue,” says Higdon. “I was here in 2006 when we worked on eminent domain, and the legislative intent was for it to only be used for public use.”

But Tom Droege, spokesperson for Bluegrass Pipeline, tells LEO that their critics are misguided. He says transporting such natural gas liquids via pipeline is much safer than using trucks and rail, and claims that more than 90 percent of the needed land has already been secured. While Droege says the use of eminent domain is a “last resort,” he adds, “We may have to. That would be for the individual property owners who decided not to work together on an easement. And there may be a situation where we decide to reroute.”

Tom FitzGerald — president of the Kentucky Resources Council, who has been active in providing pipeline critics with information — says Bluegrass Pipeline representatives have not provided the public with complete information about the project, including their claims that pipelines are “37 times safer” than transport by other means.

“The reality is if you transport it by rail or truck, you may have more accidents, but the contents of the truck or rail car are the extent of the spill,” FitzGerald tells LEO. “But if you have a pipeline rupture, you have the potential for releasing a significant amount more.”

FitzGerald also calls the company’s claims that the pipeline will provide a “public service” for Kentucky — thus giving it the power of eminent domain — dubious. “They’re going to try to spin the project as something that could serve Kentucky customers, but all of their information suggests that this is simply passing through the state on its way to the Gulf.”

FitzGerald does not rule out Bluegrass Pipeline trying to use eminent domain before the end of the year, and says Beshear needs to show leadership. “It’s a shame the governor is not taking this threat to landowners more seriously than he is. I’m not sure who is advising him on this, but the threat is certainly there, and there’s no good reason for failing to take it up in a timely fashion.”

At Bluegrass Pipeline’s open house the following day in Elizabethtown, 21 nuns and employees from the Sisters of Loretto Motherhouse in nearby Nerinx gathered in a circle at the center of the room, singing “Amazing Grace” and chanting against the project. A Bluegrass Pipeline employee — flanked by a police officer — told them to stop singing or they’d have to leave the property.

The Sisters of Loretto are refusing to sell the rights to their land, along with the monks at the Abbey of Gethsemani down the road, together totaling more than 3,000 acres along the preferred path of the pipeline. Sister Mary Swain tells LEO the action was necessary to draw attention to the potential environmental devastation of the ecologically sensitive area. “The land is a gift, it’s not just something we use,” says Swain. “Whatever the amount of money is, we’re not going to sacrifice the future for money.”

Swain says that if Bluegrass Pipeline tries to take their land through condemnation, the sisters will be waiting for them. “There’ll be civil disobedience out here if there’s eminent domain. I will sit in front of bulldozers. We’ll have people in walkers and wheelchairs out there sitting in front of bulldozers. It’ll be like the ’70s all over again.”