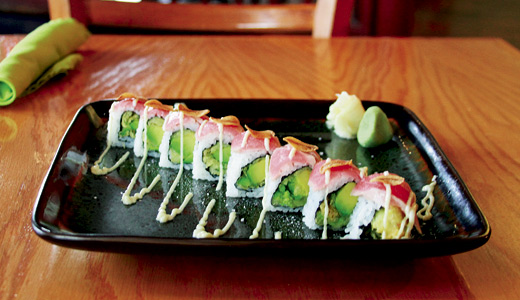 It would be a game full of samurai warrior avatars, of course, but it would have to have moustachio’d bandidos too, as DKD (as its fans abbreviate it) manages to fit both Japanese and Mexican flavors — and a lot more, too — into a single menu, and somehow it works.

This is a bill of fare that offers a broad range of maybe four dozen creative Japanese-style maki (sushi rolls, ranging in price from $5-$15), but that also is prepared to tickle your taste buds with delicious Mexican-accented tacos ($8-$11), quesadillas ($7-$9) and even flatbreads ($8-$12) that look a lot like international-style individual pizzas, topped with all manner of goodies.

Be aware that little of this is standard Mexican or Japanese, but it rambles the globe in search of inspiration. Japanese onigiri rice balls look a lot like Siciliain arancini rice balls, for instance, and, indeed, the Mediterranean Yaki Onigiri ($4.50) veers mighty close to Italy with its earthy stuffing of sun-dried tomatoes, kalamata olives and Gorgonzola cheese.

Or consider, if you will, another rice ball, Chorizo Yaki Onigiri ($4.50), a pan-fried spheroid made with short-grain sushi rice, stuffed with Mexican chorizo and scented with aromatic cilantro, fried in Asian sesame oil and plated up with mayo flavored with wasabi, the sinus-clearing green sushi horseradish.

It caught me by surprise the other day to realize that Dragon King’s Daughter has been around for more than four years, owner Toki Masabuchi having opened it in July 2009 in what proved to be the first step of her separation from the then-popular Maido Essential Japanese in Clifton. (Maido continued in fits and starts but finally closed last fall after the death of its latest chef and owner, Si Won Yu.)

DKD, more happily, seems to have gone from instant to enduring popularity — it was very busy even on a Tuesday night during our recent visit. In my opinion, what was good four summers ago is even better now, a casually comfortable scene with friendly and assured service, and an invitingly priced menu that has expanded in size and diversity while holding most choices under $10. (There’s also a recently opened location in New Albany at 202 E. Elm St.)

Add an estimable drinks program (which it also held in common with the late Maido), and you’ve got a great deal to like and virtually nothing to complain about. The beer list — bottle and draft — is almost entirely artisanal, with a nod to locals (beer geeks may ignore the Miller Lite and Corona in the lower left if they prefer). There’s also a short but thoughtfully chosen wine list that tops out at $30, a good thing, and a few interesting sakes plus shochu, the fiery Japanese-distilled rice liquor.

We settled down with glasses of hoppy Low Life Evil Twin Pilsner and clovey Ommegang Witte and started working through the menu.

First, a pair of colorful sushi rolls: Caleb Don’t Hurt ’Em ($12) and avocado tempura ($8) made an attractive platter that tasted as good as it looked. The former is an “inside-out” roll with the nice contrast of crunchy tempura crust surrounding buttery avocado within, beefy scarlet tuna tataki strips on top, striped with wasabi mayo and garnished with crisp slices of deeply browned garlic. The latter featured a similar avocado treat within, simply accompanied with chopped walnuts and a luscious hot-sweet mango chili sauce.

This was seriously good stuff, and it went down fast; but a person cannot live by sushi alone, so we moved on to another Mexican-Japanese-Italian mash-up, the Pesto Chicken Katsu Quesadilla ($9). A plate-sized flour tortilla was toasted brown, then folded over a good-sized portion of sliced, flattened boneless chicken breast, breaded with crisp ground almonds and panko crumbs, blanketed with provolone and mozzarella cheeses and kicked up with spicy wasabi pesto sauce.

A couple apps served as dinner small plates to complete the job of filling us up: first, the aforementioned Mediterranean Yaki Onigiri, and then an order of gyoza (Japanese potstickers, $4), a generous plate bearing a lucky seven crisp pan-fried dumplings stuffed with minced veggies and plated atop an artfully savory two-tone mix of spinach vinaigrette and spicy mustard-and-chili oil.

We probably shouldn’t have tried to load a dessert on top of this wild mix, and I did find the strength to say no to either a fried Snickers Bar with ice cream ($5) or, though I was sorely tempted, a maki-sushi roll fashioned from Oreo cookies and cream cheese tempura-fried in a soy wrapper.

I may have to come back for that some day when I’m really hungry. I’ll let you know. But an after-dinner special, green-tea and white-chocolate pot de creme with coconut flute crisps and a dab of whipped cream seemed lighter and too good to resist.

As mentioned, the pricing is more than fair: An over-filling dinner for two rang the cash register at $55.11, including the beers, and consistently attentive but not overbearing service earned a $12 tip.