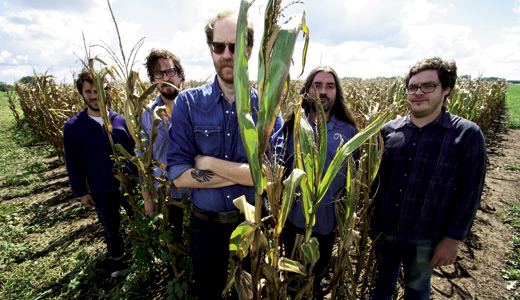 For more than 30 years, the Abromavage brothers, bassist Chris and guitarist Mark, have made some of the most renowned punk and metal music to come out of this city — first, as members of Malignant Growth, which morphed eventually into Fading Out. Later, Kinghorse showcased younger brother Mark’s chops.

For Mark, The Decline Effect isn’t so much a departure as a continuation. Formed after a holiday get-together, he notes of their evolution, “It’s rock, it’s hard rock, it’s whatever comes to my mind. Even my softest music always ends up being heavy; it always has a hard edge to it. What I lack in talent, I like to make up for in volume.”

Returning to playing with his brother is natural and welcome. “When I was growing up — I’m four years younger than him — I was always in his shadow,” Mark explains. “He went off to the service, gave me a guitar … I kind of learned to play on my own. He came back and we did the Malignant Growth/Fading Out thing. Then I did Kinghorse, and I had a chance to shine on my own. It was kind of nice. But I’ve gotten to the point where it’s fun to play with him again.”

So what can we expect from their impending performance? According to Mark, it’s difficult to parse what makes for a good show, but he delineates, “As a performer, I just think a crowd that is genuinely into the music, where you can see that they’re actually taking it all in. As a person in the audience, I’m not sure. I’ve seen good bands, but I’m not sure that they’ve put on good shows. I don’t necessarily know what I want, but I know what I like. I guess the days of … I haven’t seen a real good frontman lately … a band that actually clicks, and kind of commands attention, or some human oddity that you can’t take your eyes off of.”

Comprised of some of the finest musicians Louisville has to offer, Old Baby is a testament to restraint and refinement. This is never more evident than on Love Hangover, their second full-length, which was released yesterday on Karate Body Records.

“Love Hangover is a totally different beast than (first album) Misunderstanding Human Behavior,” singer/guitarist Jonathan Wood says. “(MHB) was done really quick. We recorded it two months after we’d first had the idea to play together. Everything about the process was different. We had a year of writing after that before recording Love Hangover. We found out what worked and what didn’t work, and how to write together in that year. I think you can hear it in the songs.”

Given their often-monolithic sound and possibly ominous album title, is Love Hangover indicative of a particular theme? According to Wood, “The album title came about right after we had recorded. We’d joked about the ‘love trilogy’ of ‘Love Hungover,’ ‘Love Hungry’ and ‘Weight of Love,’ which are three tracks from the record. Someone mentioned naming the record Love Hangover, and it just stuck with us.”

Speaking with Wood, there is an undeniable sense that the members share an enthusiasm to create not only quality music, but also a sense of community. He says his ideal live show is one when the quintet expands to include sound engineer Joe Seidt and visual artist Tim Furnish.

“Joe and Tim are part of Old Baby as well,” Wood says. “They’ve traveled with us, when available, over the past couple years. Joe runs sound for us. Tim has created incredible projections for us. When all parts of the machine are moving, our live set really rules.”

“We’re all incredibly excited to hit the road,” he adds, noting that Freakwater’s Catherine Irwin will join Old Baby for this leg. “These are my brothers. We have a good time, always. We’re playing some really great rooms on this tour, some that I’ve never had the opportunity to play in. The Louisville show will be a blast. It’s our last show of the tour, so everything will be worked out. We’re excited for everyone to hear the record!”