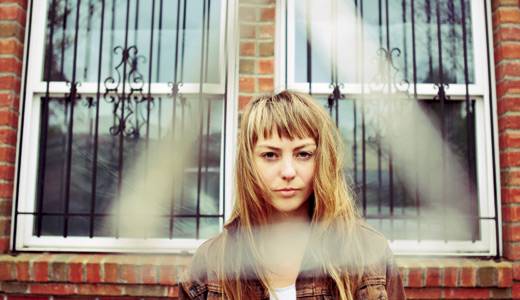 The first thing you need to know about Angel Olsen is that she’s very funny. If you’ve heard her solo albums — especially her most recent, 2012’s Half Way Home — then you might have an impression of her as depressed, angst-ridden, dramatic. But that’s only part of her story.

She’s multi-dimensional and full of promise waiting to be revealed. A native of St. Louis who has lived in Chicago for six years, Olsen plans to move again soon. This week, she returns to Louisville, where she has already spent quality time due to her role as supporting vocalist with Bonnie “Prince” Billy for several tours.

So what’s her impression of our city and our people and our music? “I like your city and your people and your music,” she says. “There was a band called Humungous that everybody was always talking about that I wanted to see,” she notes, adding that they have a song called “Awesome” she likes, laughing as she shares that fact. “I think the line is Awesome, give her what she wants, over and over and over again. I think it’s pretty amazing.”

She’s enjoyed spending time in Louisville because it reminds her of her hometown, in parts — she enjoys the many hidden gems, the funky stores one can only find in the artsy neighborhoods, and being able to enjoy some natural beauty without having to travel far.

“I like Louisville,” she allows in a noncommittal tone. “Maybe I’ll live in a little cave there.”

When Olsen moved to Chicago, she made friends in the music scene, and they soon booked her to play house shows. Her powerful voice leapt out of what the Chicago Tribune called her “petite and moon-faced” body, leading to work with guitarist Emmett Kelly, who recommended her to Kelly’s frequent collaborator, Will Oldham of the Bonnie “Prince” Billy band.

This July, Olsen and her band recorded a third album in Asheville, where her label is based, with a possible year-end release date penciled in. She released a pair of songs earlier this year as a teaser. “Wellllll,” she begins with a fake drawl that somehow also works as a Valley Girl impression, “I put out some sonnnngs this year, and it was kinda funnnnn —” she cracks up, unable to continue the charade.

She got sick the day she arrived for recording. She had been unable to sleep, excited but also worried about all the what-ifs facing what will be her most scrutinized album to date. “It’s pretty common, I think. A lot of artists psych themselves out.”

“I’m really proud of the progress we’ve made. We’ve only been a band since last winter,” she explains. “There are things I’m learning about that process, because I’ve always played solo, and (her new bandmates) have always played in a band together, so they’re learning, too.”

She’s even been singing in new ways, or finding new ways to bring sounds out, as she develops her technique.

It sounds cheesy, she says, but it takes a while to find the right people to work well around. It’s less cheesy than a simple and common truth; she’s had to learn to play with others while the others learn to play more like her: sometimes off-kilter, able to veer from folky to operatic and back, sometimes scripted but appearing to be improvised.

Recording, this time, turned out well. “It was an amazing experience,” she says, having relayed tales to LEO of waterfall swims and homemade kombucha. “I’m really psyched that, with all the worry … as much as you can prepare for any situation, there’s no point losing any sleep over it. Something can come totally out of nowhere and mess it up for you.”

About the new album, she’s even willing to say it’s something she would listen to, though she doesn’t sit at home listening to her previous recordings. This leads Olsen to a recital of fake passions she assumes people would want to hear her talk about: “getting Zen,” “finding her shakra,” all of which sound funny to her. She adds, “I would recommend you do yoga and go on a raw-food diet … and then talk about it nonstop. And then … start rock climbing. Actually, I don’t know how you get Zen. I think it’s what you do when you watch ‘30 Rock.’”