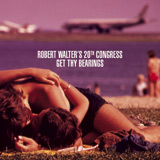 Robert Walter has reconvened the 20th Congress, with Cochemea Gastelum and Karl Denson on saxes, Elgin Park on guitar, and others. The title track is Donovan’s jazzy piece, a showstopper in early King Crimson concerts, with the band splitting the difference in the two versions. The only other cover is “Up from the Skies,” with RW20C re-imagining Jimi Hendrix’s spacey swing tune as spacey funk. The other songs are originals, mining soul and gospel influences, starting with “Hunk,” followed by the New Orleans R&B of “Little Business,” reflecting Walter’s years in the Crescent City. “Dog Party” conjures up Leon Russell’s early sanctified sound, and “Crux” lacks only a vocal amen corner. “Don’t Chin the Dog” features Denson’s lilting flute. The nine songs in 39 minutes feel like sketches waiting to be filled out with live jamming, a mainstay of the early RW20C.