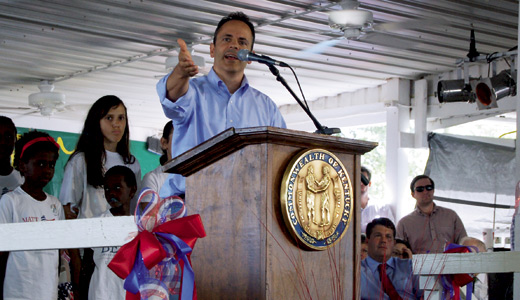 There aren’t many circumstances in which an elected official at a church picnic can open a speech with a dick joke directed at the father of an opponent who is sitting paces away with her sweet old grandmother, yet fail to shock most attendees with the rudeness of the act.

But then again, there just aren’t many events in America like the Fancy Farm Picnic in the small Western Kentucky town south of Paducah, which held its 133rd annual raucous affair last Saturday, known as much for the brutal roasting and heckling of politicians as the nine tons of pork and mutton smoked and devoured on its premises.

The joke in question — delivered by Sen. Mitch McConnell and noting the father of his Democratic opponent in next year’s Senate race, Alison Lundergan Grimes, contributed to the campaign of crotch-photo addict Anthony Weiner — was met with roars of approval and boos from the small pavilion split down the middle among Democrats and Republicans.

The rowdy behavior of the crowd — as much a part of the tradition as the barbs traded by political opponents — was hinted at by moderator Ferrell Wellman of KET moments earlier.

“Are you going to be on your best behavior?” Wellman facetiously asked, receiving a loud cry of “No!” from the crowd, the only moment of bipartisan unity besides the singing of the national anthem and “My Old Kentucky Home.”

Though election off-years such as this one are typically more subdued affairs at Fancy Farm, the showdown between McConnell and Grimes brought in a huge crowd, filled not just with the typical bused-in political activists but national media eager to cover what both sides call the biggest 2014 race in the country, already well under way.

Such a moniker for Kentucky’s Senate race seemed unlikely to many just five weeks earlier. By late June, the McConnell campaign’s massive war chest and pre-emptive attacks had scared off credible challengers in both parties.

But Grimes announced her intention to run against McConnell on July 1, followed three weeks later by an impressive campaign rollout by Republican primary challenger Matt Bevin, a wealthy Louisville businessman who has quickly picked up local and national Tea Party support.

Though McConnell’s campaign gleefully mocked Grimes’ clumsy entrance into the race, they lost any reason to laugh in the week leading up to Fancy Farm. Last Tuesday, Grimes packed a lawn in Lexington with nearly 2,000 supporters for her official campaign kickoff, featuring not only most prominent Kentucky Democratic officials — who are rarely so unified — but a video address from family friend and former president Bill Clinton, who won the state twice.

By the eve of Fancy Farm weekend, not one, but two polls showed that Grimes already held a slight lead in the Senate race, with the Cook Political Report changing the status of the race to a “toss up.”

But McConnell was entering his element at Fancy Farm, as the notoriously cutthroat campaigner entered familiar ground where “bad behavior” is the norm, and his opponents are relative novices in unfamiliar and hostile territory.

However, the Fancy Farm weekend’s festivities would show that the era of invincibility for Kentucky’s five-term senator is rapidly becoming a thing of the past; for the first time in his political career, McConnell is being squeezed from both his right and left, with the political fight of his life on his hands.

On Friday night before the next day’s main event, the Democratic Party held their annual Marshall County Bean Supper, where office holders usually give their Fancy Farm one-liners an initial test run.

The crowd — and the large gaggle of reporters — came to see Grimes, fresh off the momentum of the past week. Before giving her speech ripping into McConnell as a self-centered symbol of Washington’s dysfunction, Grimes surprised reporters by taking a few questions, as she has rarely given interviews since announcing her intention to run last month, with many of her specific policy positions still a mystery.

Grimes added some detail regarding her stance on the Affordable Care Act, which had been vague up to this point. She said she supports the provisions that prohibit denial of coverage because of a pre-existing condition, allow children to stay covered on their parents’ insurance until age 25, and the Medicaid expansion and private health care exchange that could provide coverage to an additional 600,000 Kentuckians.

On the other hand, Grimes says she opposes the “burdensome regulations” the law imposes on businesses, supporting the delay of employer mandates for covering their workers.

Grimes — who has already faced a barrage of attacks by the campaign and Super PAC of McConnell attempting to tie her to President Obama, who is quite unpopular in Kentucky — reemphasized in her speech to supporters that she strongly opposes the Obama Administration’s regulations on the coal industry, adding the ubiquitous slogan “Coal keeps the lights on.”

In other interviews that weekend with national press, Grimes revealed that she is pro-choice and favors expanding background checks to gun shows and Internet sales. But bracing for McConnell’s attempt to tie her to Obama, yet not alienate liberal Democrats, Grimes repeated her line that she is her own independent person who will act in Kentucky’s best interest and should be judged on her own beliefs.

“I don’t always agree with the president,” said Grimes. “But that doesn’t mean we shouldn’t put the good of our people ahead of the bad that comes with acting petty and small.”

Saturday morning, the Republicans held their annual breakfast at Graves County High School, where Sen. McConnell tested out his Fancy Farm zingers, which avoided specifically naming Grimes while referring to her as Obama’s “cheerleader,” along with cryptic allusions to the boogeymen who want to help her defeat him: “liberals,” “George Soros” and “people from San Francisco.”

“Do we want Obama’s America, or a Kentucky America?” McConnell rhetorically asked the crowd decked out in red “Team Mitch” shirts.

Glaringly absent from the GOP breakfast was not only his primary opponent Matt Bevin, but any sign of his supporters. Bevin’s campaign says that he was not invited to speak that morning, though he had just arrived back in town from a large conservative political blogger convention in New Orleans, where he was well-received for his digs at McConnell for being more concerned with his own personal power than standing true to conservative principles.

While McConnell supporters mocked Bevin as lacking any base of support, his one open supporter at the breakfast, Tea Party activist David Adams, dismissed the entire Fancy Farm weekend as an overblown “establishment confab.”

With the crowd packed tightly into the pavilion at the Fancy Farm picnic later that afternoon, McConnell took the mic first and gave an uncharacteristically flat speech over the cheers and heckling of the crowd. McConnell once again neglected to mention Grimes’ name but was heavy on Obama and Senate Majority Leader Harry Reid, emphasizing that this race is crucial in tipping the balance of power in the Senate and putting McConnell into Reid’s position, his lifelong personal goal.

McConnell — echoing an identical attack from the pro-McConnell Super PAC Kentuckians for Strong Leadership — noted that Sen. Reid once said, “Coal makes people sick.” While implying the quote was somehow crazy, McConnell neglected to acknowledge the thousands of miners suffering from black lung disease, Appalachian residents living near waterways polluted from strip mining, asthma sufferers living next to the exhaust of coal-fired power plants, and the overwhelming consensus of doctors and scientists who say otherwise.

Grimes then stepped to the podium and spoke — inaudible to many in the crowd over the chanting Republicans — turning McConnell’s self-applied label “the guardian of gridlock” against him.

“If doctors told Sen. McConnell he had a kidney stone, he’d refuse to pass it,” said Grimes.

Grimes, unshaken from the heckling, finished her speech and walked to McConnell smiling, offering a handshake. McConnell appeared a bit startled, remaining in his seat to return the shake, though his wife, Elaine Chao, quickly stood up and embraced Grimes.

Shortly afterward, McConnell and Chao exited the stage, soon followed by his large mass of supporters to catch the chartered buses that were leaving — cleverly or not before Matt Bevin would give his speech.

Bevin’s supporters now filled in half of the Republican side to cheer him on, while Democrats piped up and listened with smiles as he ripped into their mutual enemy.

Bevin invited his large family to stand behind him, noting that McConnell’s quick exit added room at the front of the stage. He also name-checked an old 1984 TV ad that McConnell famously used against Dee Huddleston to win his first race for Senate, where hound dogs hunted for the absentee incumbent, echoing recent criticism by some of McConnell’s GOP Senate colleagues that his leadership in the chamber has gone AWOL.

Though Bevin’s supporters were relatively small in numbers, they rang bells throughout his speech, a campaign gimmick that Bevin welcomes to note that he owns the last bell manufacturer operating in North America.

Though Bevin’s two-week-old campaign didn’t swarm Fancy Farm with supporters, his speech was almost universally recognized as the strongest on Saturday, gaining a good amount of press and ending with perhaps the most memorable line of the day.

Though a good speech at Fancy Farm can help boost an underdog candidate, it rarely makes a significant impact on a race unless a candidate makes a big mistake that can be exploited by his or her opponent, such as Jack Conway’s “tough son of a bitch” faux pas in 2009. Survive the heat and get out alive.

Though Bevin boosted his name and impressed many, he did possibly leave an opening for McConnell’s campaign. At one point in the speech, talking about the desire of Kentuckians in both parties to improve the lives of its citizens, Bevin gestured to Democrats and said, “We’re on the same team.” While Bevin’s intent was clear, McConnell has never been one to pass up the opportunity to take an opponent’s words out of context against him, and one shouldn’t be surprised to see his campaign play up the angle that Bevin is essentially teaming up with Democrats to help do the dirty work of taking out Kentucky’s senior senator.

As for Grimes, the lack of any major mistakes — possibly also due to the fact that she has yet to conduct a sit-down interview with any Kentucky reporters, who are well aware of potential weak spots — should help her momentum going forward. But the magnifying glass following her every move is not vanishing anytime soon.

Ultimately, Adams’ characterization of Fancy Farm — a circus to entertain the political activists and media who love a good show — might be the most accurate, as most Kentuckians view the yelling and partisanship as something to dread and avoid, not revel in.

But this negativity will continue, not just on the many millions of dollars worth of TV ads over the next 15 months trashing each candidate, but in Washington, D.C., where the gridlock of bitterly divided government has plunged Congress’ approval ratings to record lows.

If the campaigns of Grimes and Bevin are adept at addressing this reaction that most voters have to Washington’s dysfunctional slash-and-burn politics — and paint McConnell as the very embodiment of it — the once-invincible giant of Kentucky politics may finally meet his match.