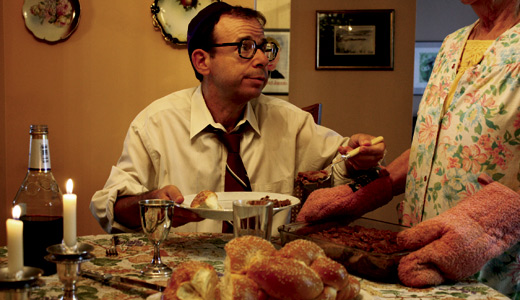 For those who grew up in the ’80s and ’90s, and comedy fans of all ages, Rick Moranis remains a beloved movie star, an endlessly lovable nebbish who always made audiences happy to see him in classics like “Spaceballs,” “Little Shop of Horrors” and “Strange Brew.” But for most of the past 15 years, Moranis has been out of sight, a J.D. Salinger of ghostbusting and shrunken kid humor. Though he still considers taking acting roles, he hasn’t been seen on the big screen since 1996’s “Big Bully.”

He denies that he’s retired. “I never retired! It was the Internet that said I retired.”

After losing his wife to cancer in the early ’90s, Moranis soon realized that, as a single parent, he couldn’t balance raising his children with having a movie career. Away from sets, he realized he was happier being at home and turned his attention back to his first love: music. His latest album of funny and Jewish-themed songs, My Mother’s Brisket & Other Love Songs, was recently released, following up 2005’s funny country-themed album, The Agoraphobic Cowboy.

What reaction does he expect such material to receive today? “I have no expectations whatsoever about how this may translate to any kind of sales,” he says. “In terms of people’s reactions — well, I made this record for about eight people.”

Having released Cowboy through a Warner Brothers label, Moranis planned a small online-only release this time, but he was surprised to be welcomed back. “I said, ‘This is not for you, there’s no market for this. It’s a little personal thing for friends.’”

An executive listened to it and told him, “‘You’re crazy! There’s Jews all over the world who will love this!’” Soon Moranis was back in marketing meetings, listening to ideas like promotional yarmulkes to be given away with album purchases.

He’s been overwhelmed by the positive response to his latest songs, including “Live Blogging the Himel Family Bris” and “I Can’t Help It, I Just Like Christmas.”

“This is the only way I know how to do these things,” he laughs. He spends the majority of his time now writing songs, a process he describes as long and arduous at times, but ultimately fun and satisfying.

Unlike his similarly musical colleague Steve Martin, Moranis has no plans to tour his music anytime soon. He also lacks interest in developing a screenplay from his material. “I made them as songs; that’s the only way I thought about them.”

For what are surely a variety of complicated reasons, Moranis stopped keeping in touch with his Hollywood peers once he walked away. Since 1985, he has resided in Manhattan’s Upper West Side, where he lives smartly off his savings. His children now grown, Moranis spends time with a handful of old friends when he’s not working on his next project. He’s working on songs he describes as “rockabilly/bluegrass” and dreams of making a jazz album.

“I have no regrets,” he says, sounding sincere and earnest. “I was never one to make any sort of plans. I just took opportunities that interested me as they came along.”