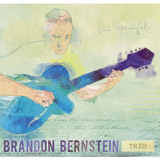 If you’re seeking a guitarist who will turn it up to 11, look elsewhere. Jazz guitarist Brandon Bernstein’s first album is a tasteful collection of standards, featuring Bernstein’s mellow tone and sensitive touch, primarily on archtop (bassist Putter Smith and drummer Kendall Kay offer subtle support). Many of the songs are played at a slow tempo, emphasizing chordal playing alternating with solo lines, beginning with “That Old Feeling.” Bernstein’s acoustic guitar on “Skylark” is enhanced by Kay’s hand drumming in an arrangement with a Latin feel. Bernstein (who received his master’s in music at U of L) cuts loose on Bud Powell’s “Celia” with up-tempo single-note runs. After thoughtful takes on classics such as “My Old Flame” and “I’ll Be Seeing You,” Bernstein closes with a lovely solo acoustic rendition of the title song.