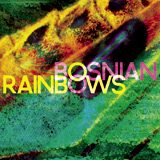 Since the untimely disbandment of The Mars Volta, guitarist Omar Rodriguez-Lopez has changed course, and no, not with another solo album. It’s a lush pop record, headed by Teri Gender Bender with former Volta band mates Deatoni Parks (drums) and Nicci Kasper (keyboards). Rodriguez displays restraint here, fitting complex riffs with Teri’s melodic vocal hooks. (Perhaps this came from producing a record for her band Le Bucherettes.) “Torn Maps” rocks like an optimistic Rush song, though Teri’s range is contrary to Geddy Lee, simmered to a low, mid-range. “Dig Right in Me” and much of the album shows Bosnian Rainbows are musically deep, driven by the unmistakable wail of Rodriguez’s guitar and Teri’s vocal command. Their live shows are talked up to be a spectacle, while this record is merely an invitation to the experience.