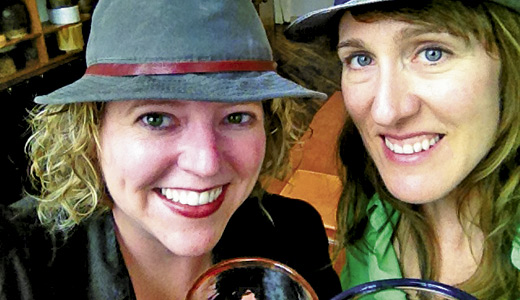 It was around Derby of this year when I heard some unfortunate news — there was someone running around this town with the same name as me! Well, she had an “h” on the end of Sara, but as you Bar Ballers know, that’s the name of my alter-ego, Sara with an “h,” who often ruins my reputation when I’ve had too much to drink.

So last week, instead of calling for a public exile, I put aside my bitterness and decided to meet this Sarah Havens face to face. Turns out we have a lot in common. She makes hats; I make dick jokes. We have the same head size. And we’re both busy during Derby — her with her arts, me with my (liquid) crafts.

Bar Belle: How often do you get mistaken for me?
Sarah Havens: Quite often! Someone came to my door for another artist once and I introduced myself. He got so excited and asked if I worked at the LEO. I said, “No, I’m the other Sarah Havens. I make hats.”

BB: Do people often question your sobriety?
SH: (Laughs.) No, I don’t think so.

BB: Have you ever gotten a free drink?
SH: No! I should work that, though! But you’re blonde.

BB: Have you ever had to apologize for something I did?
SH: Not yet! What have you done? Should I be warned?
BB: You might want to stay away from the mayor for a while.

BB: I’m trying my hardest to keep my name off dive-bar bathroom walls. Will you agree to do the same thing?
SH: Sure, as long as you don’t put my number down.

BB: Oh, if someone asks me out and I’m not interested, can I just give them your number?
SH: Uhhh … sure? If you think he’s a perspective person — if he seems like a good candidate. I’m trying the old-fashioned approach to dating by networking. We could try a little grassroots dating service!
BB: Well, I’m into ladies, so I will gladly pass along dudes’ numbers.
SH: (Laughs.) Sounds good! I used to get hit on by girls when my hair was shorter.

BB: Like my mom, do you ever get embarrassed by what I write?
SH: (Laughs.) Not yet, because I have a sense of humor!

BB: What’s your drink of choice?
SH: I like a dark & stormy.

BB: Where do you stand on bourbon?
SH: I can’t drink it because I have celiac disease and it’s made with grain. I used to love it with a splash of water on the rocks, but it made me really sick. So usually it’s just rum, hard cider and wine. Apocalypse makes a good gluten-free beer.

BB: Do you ever drink while making hats?
SH: Oh no! Well, actually, yes. It depends. I can’t really drink too much and stitch with the machine. I can do hand stitching, though. Especially toward the end of the night, a glass of wine relaxes me.

BB: If you were to make me a hat, what would it look like?
SH: Hmm … it would be a smart, cute hat with a little brim, because you have curly hair.

BB: Can you make me a hat out of a bourbon barrel?
SH: Not the whole barrel! But I’d take on the challenge. What if I just used the bunghole? The bunghole hat!
BB: That sounds right up my alley.

BB: Would you be willing to switch jobs for a week?
SH: Like “Trading Places” or “Wife Swap”? Sure! Would I have to wear a wig? Would you like to make hats?
BB: We could call it the “Sara(h) Swap” — and no need to wear a wig, just pay off my tabs, would you?

Sarah Havens has a show at Garner Narrative, 642 E. Market St., through Sept. 27. Stop by and ask her about the Dr. Seuss hat she once made.