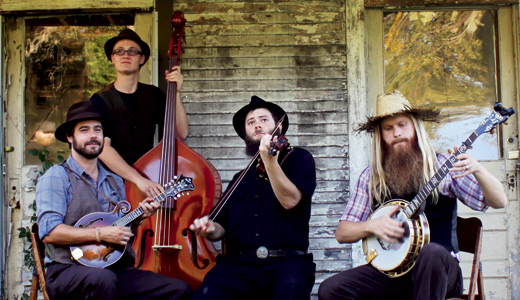 Whiskey Bent Valley’s new album has just about the cutest cover you’ll see this year. It’s a drawing you might expect to see on the cover of a classic kids’ book, not on the cover of a new album by an old-time bluegrass band from Pewee Valley. But there it is.

Col. Mason Dixon: The new album is entitled Peter Tracks. It is full of traditional old-time banjo and fiddle songs. This album is a true representation of “What you see/hear is what you get.” There are zero overdubs on the album, hardly any retakes were ever used — we were trying to catch that true instrumentation and sound of acoustic instruments playing old traditional music.

We recorded the album at Dead Bird Studios in Louisville. We had intentions of having guests on the album, but things just did not work out exactly how we planned. However, I think in the long run it ended up being better, because you get that true representation of what us four musicians bring when we are together.

Some of the songs we enjoy playing most live would have to be “Police Man,” “Let Me Fall” and the old traditional tune “Soldier’s Joy.” On the back of the CD, there is small print that says, “Recorded live on the floor.” That’s an old-time saying meaning no overdubs — a true live sound.

The artwork was done by a guy in New York City named Eric Losh. He has done many different bands’ albums, including the Hackensaw Boys and Pokey Lafarge. The cover image was just something I thought of … I wanted something true, and what’s better than an old rabbit in a creek bed?

Whiskey Bent Valley plays on “Great Day Live” Thursday at 10 a.m., at Manny & Merle on Friday and at the Kentucky Bluegrass & Bourbon Festival on Monday.