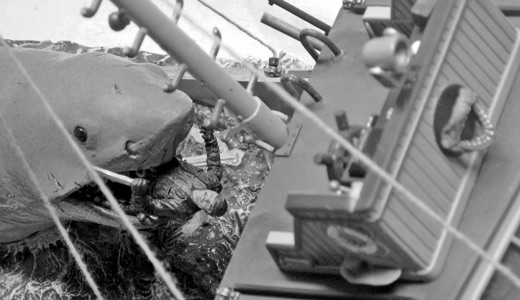 Bryan Renfro knows that films are sort of a biopic of life. Everyone’s lives, really. Because even in a film such as “Star Wars,” which reportedly was set a long time ago in a galaxy far, far away, the characters have dreams, hopes, love and — if Chewbacca counts — even pets.

Renfro, creator and host of the popular podcast “Movie Meltdown,” has therefore conceived of yet another way to illustrate how film crosses over: “The Movie Geek Art Show.”

Starting Friday at Hilltop Tavern, you can get a look at what life’s lobby cards might look like with an exhibit titled “Movie Meltdown.” Local artists have painted interpretations of classic films, and during the F.A.T. Friday Trolley Hop, you can get in on an opening night party from 6-10 p.m., which also features music by The Moonlight Peddlers.

“I’ve been hosting ‘Movie Meltdown’ for years now,” Renfro says, “and what I’ve always tried to do is not just focus on film, but on how the movies cross over into our lives. How much the real world is influenced by cinema, and vice-versa.”

Amy Weidl cleverly reimagines R2-D2 as a film projector, no doubt inspired by the short Princess Leia clip the droid shows repeatedly in the original film, as the princess famously pleads, “Help me, Obi-Wan Kenobi; you’re my only hope.” (Weidl even illustrates the classic dust floating in the light of the projection that everyone sees but never talks about.)

Lyndi Lou gives us “Cathouse of Horrors Series 75,” in which a blood-splattered cat — which narrowly missed a chance to be really cute — wears a Jason Voorhees-style hockey mask through which it stares at the viewer with dead, milky-white eyes.

And Renfro himself offers us an entertaining 3-D miniature depicting a well-known shark with a knife-wielding Quint locked in its jaws as the boat is overtaken. The clever title of this piece is “I Survived the Indianapolis for This?” (“We’re Going to Need a Bigger Boat” would have been way too obvious.)

In all, more than 20 local artists have created work for the exhibit, including a really creepy nod to “A Clockwork Orange.”

Renfro has also created a spin-off podcast that focuses on the music used in films. In addition, he always encourages local writers to submit reviews and random articles on film to moviemeltdown.com. Crossing the lines between artistic media isn’t new for him and his podcast.

“I love when the art mediums cross over,” Renfro says. “When we get to use audio recordings as well as visual art, photography as well as filmmaking, music as well as the written word, and we mix that all together, and somewhere in that conglomeration is where ‘Movie Meltdown’ is created. This live event is just a good way to highlight all of those things and have a fun evening in the process.”