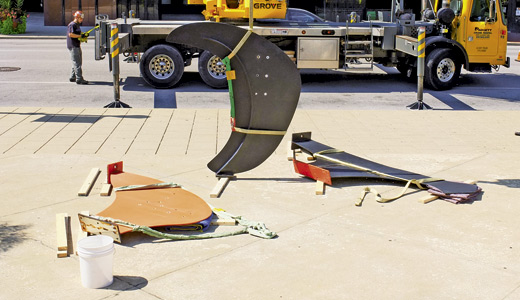 Have you been on Main Street lately? Notice anything missing?

On July 13, the Alexander Calder sculpture in front of the Kentucky Center was disassembled. Puzzle pieces of steel — like a favorite origami animal unfolded — were laid flat on the ground. Each shape was lifted individually, by crane, and secured for the move in the back of a flatbed semi truck.

Witnessing the fluid form of “Red Feather” reduced to five shapes — four flat forms and a base — reminded me of how Calder, after the success of his wire sculptures, including his famous “Mobile” series, said he wasn’t sculpting but “drawing in space.” The sculpture is normally huge waves of steel creating an orb of volume within clear air. It is one of Calder’s “Stabiles,” large-scale works the artist embarked on following the popularity of his kinetic work.

“Red Feather” is now in Virginia. A company experienced in Calder’s work is restoring and repainting it over the next three months. “The restoration is part of routine maintenance needed with outdoor sculpture,” says Abby Shue, vice president of the Kentucky Center. “The current paint application is faded and chalky due to the weather, and some of the paint is chipping around the edges. There is also some minor metal corrosion, particularly in the elements that mount the piece to the ground.”

The sculpture was last repainted in 2002. Although the Kentucky Center is not an art museum, Louisville is fortunate to have the artwork within and around the performing arts center. There are relationships between the pieces that connect the dots in the context of modern art. For example, after passing the Calder and entering the Kentucky Center, a visitor can head up the stairs and see Joan Miro’s “Personnage,” a cartoonish white creature that rises into a small dog head that could have been an inspiration in creating contemporary cult favorites Wallace and Gromit.

Calder and Miro were close friends. They admired each other’s work and there are commonalities in the playful forms, bright colors and unanticipated shapes both artists employed. It is interesting to look at these two pieces on a single visit and imagine what qualities the artists appreciated in one another’s work, how they may have influenced the thinking of each other.

Completed in 1975, Louisville has enjoyed “Red Feather” since its acquisition and installation on the Kentucky Center steps in 1989. I’ve only lived in Louisville for three years, but I’m accustomed to seeing “Red Feather” each time I’m on Main Street. The steps are especially bare as I am still missing the Dubuffets that went indoors after their restoration in 2011. Although Dubuffet’s “Faribolus” and “Perceval” stand in the lobby for all to view, they appear stifled, as they are sunlit from the back and cornered by seating and events. Thankfully, “Red Feather” is scheduled to return to the same spot on the steps after it is restored.

I look forward to watching the polished pieces unload in autumn, heavy machinery carefully building “Red Feather,” a weighty mass that floated away on a sunny summer Saturday. The Calder returns to Louisville in mid-October.