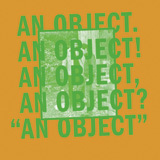 Like Mission of Burma’s Signals, Calls & Marches, An Object is a people’s record. It has a low-key quality, comforting listeners to the same degree that it tempts action. Each song is uniform in monotony but dares not to be tampered with as they seem vain, have vicious undersides and are chock-full of anger toward a vapid world. The album tends to drone, and the pretty overtones decorate the masked diatribes that lie therein, producing an emotional package that is highly relatable and very human. Contrary to the preceding album, Everything In Between, An Object is much less relieving, less poppy and more basic. There are intricacies left out that the older No Age would have snatched up years prior to this release, making An Object their most accessible album to date, and possibly their most powerful.