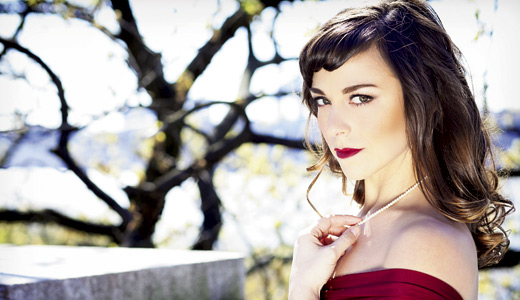 What better to be than young and free in Paris?

Or young and in love in Verona? But then, tragedy.

And it happens twice this season, as Kentucky Opera presents “La Bohème” in September and “Roméo et Juliette” in February. For Louisville audiences, it’ll be all about the young at heart, with Puccini’s carefree Bohemians and Gounod’s star-crossed lovers singing across the Brown Theatre stage.

Fortunately, says executive director David Roth, Kentucky Opera just happens to have young and beautiful casts lined up to sing those two operas — beginning with 29-year-old Corinne Winters, who will step into the role of Mimi in “La Bohème” for the first time in her career.

“Corinne Winters is a huge, huge talent right now and a sweetheart of a girl,” says Roth, who can’t help but gush over what he feels is a spectacular casting coup.

“Corinne is very young, and yet she has already had a huge hit with the English National Opera back in the spring in ‘La Traviata,’ in the lead role of Violetta,” says Roth. “All of the press was eating her up. Then she had another success just last month with the Opera Theater of St. Louis in an opera called ‘The Kiss.’”

Composer Charles Gounod adapted his “Roméo et Juliette” from the Shakespeare play. The opera is set in Italy but sung in French — as opposed to “La Bohème,” which is set in France but sung in Italian. Anyhow, “R&J” is just brimming with romantic music for the young lovers to sing. It’s been tagged backstage as “a love duet with occasional interruptions.” The cast is headed by Ava Pine as Juliette and Vale Rideout as Romeo.

“What we have with this season is what we’ve been working to achieve the last few years,” says Roth. “We want to showcase young artists who are breaking out in their careers, who will come here and cut their teeth for the first time in these roles.”

In between the youthful revues, the company shifts gears in November for the Verdi opera “Simon Boccanegra,” a tale of revenge and palace intrigue. The composer set the story in 14th-century Genoa, with a goldsmith and a corsair, a daughter of the Doge and, heaven forbid, a Genoese commoner. Kentucky Opera resets the tale with modern people, including Fascists, in pre-war Italy in the 1930s.

Though penned by Verdi, “Simon Boccanegra” is seldom performed outside Europe and has never been done in Louisville. Roth says that’s part of the appeal for the Kentucky Opera.

“Because it’s a work that’s not done, there aren’t sets to be rented,” he explains. “So when we launched our new productions of ‘The Marriage of Figaro’ and ‘Don Giovanni’ last year, we learned how to create, design and build our own sets, costumes and props for at least one new production a year. That will allow us to get into repertory that is traditional — but new to our audience.”