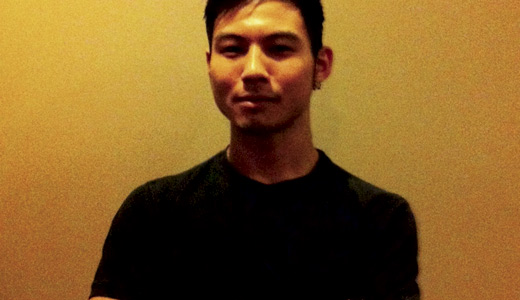 Occasionally art sneaks up on you and wrestles you to the ground. Such is the case with Shohei Katayama, a self-described “computer science guy” who didn’t start creating art until he was in college.

He was actually concentrating on psychology and music when he took a class with sculptor Bob Lockhart at Bellarmine University. “I needed something to do with my hands,” he says, smiling. That class changed his life. Katayama graduated with a bachelor’s in fine arts in 2010 and later studied with glass artist Che Rhodes at U of L. The rest, as they say, is (art) history.

That doesn’t mean his former interests are gone — he just incorporates them into his sculpture, installations and graffiti-like line drawings. Artists sometimes live too much in their heads; Katayama seems to have bypassed that hurdle by creating conceptual art (although he does explain that “my feelings change week to week, so my art changes”).

His work is a heady mix of psychology, contemporary issues and social phenomenon. “I want to be a catalyst of information,” he says. “I don’t really care if my art goes places; I’m spreading ideas. I think it’s important to incorporate the viewer. It’s the three (principles by philosopher Roman Ingarden): artist, artwork, viewer. Without the viewer, it’s nothing.”

Connections are important to Katayama, both creatively and personally. He lived the first part of his life in Japan. After moving to Louisville when he was about 13 years old, he found himself “distant with people, maybe because there’s not that many Oriental people here … and I couldn’t speak English well at the time.” But now he proudly proclaims, “I’m a Louisvillian.” In 2012, he was the artist-in-residence at the Asia Institute-Crane House and currently is a speaker on Japanese art and culture.

His art has struck a chord with local viewers, perhaps because he’s a bit hard to pin down, as he really doesn’t have a single identifiable style. Yet Katayama feels “they do have similarities … I focus on a motif idea that’s simple so it can correlate to all cultures. My recent work is more phenomenon-oriented, scientific-driven, combining nature and scientific forces to shape the human experience and its development. So that’s, like, my main thing (right now).”

While he doesn’t want to go into detail on future projects, he will say he’s working on a way to bring street art into the gallery. He’s also planning to open a studio/gallery in Old Louisville in a few months. “I’m managing to survive on my art,” he exclaims, an amazing feat for a young artist. He’s down to one day a week as a server, a staple for many young (and not-so-young) creatives.

Katayama, a member of PYRO Gallery, will be part of a group show there at the end of the year. He gives little away about it, except to say it may feature live organisms like algae, “simple things that you can keep in a static position.” Stay tuned.