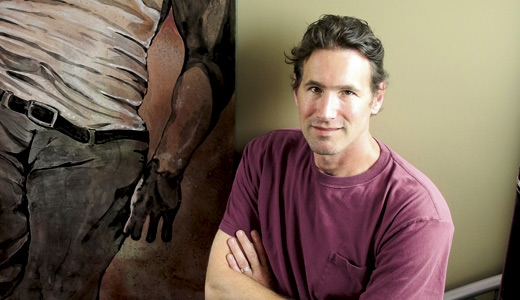 If you have seen a theatrical production in Louisville, chances are Karl Anderson has been involved. He has done work for Actors Theatre, Stage One, Pandora Productions and the Louisville Ballet, to name a few. When he is off work, he draws and paints in his studio.

“In the props department (at Actors Theatre), I can build, weld and paint. It has more detective work in it, a lot of problem solving,” Anderson says. “I also do scenic design. Theater has dimensionality that no other art form has — with the collaboration involved and the way the audience is part of the art — and as a scenic designer, I’m more immersed in theater as an art form. It’s an important part of my career.”

But then, as he leans back, I can see his studio work come to mind, and he adds, “Yet, I still like doing my own work; large-scale painting brings me personal satisfaction and fulfillment.”

The theme that runs through all of Anderson’s work is an interest in narrative. He talks of his appreciation for the paintings of local artists Kathleen Lolley and Joshua Jenkins, as well as famous abstract artists Jackson Pollock and Wassily Kandinsky. And it is impossible to dismiss his love of popular culture. Filmmakers and world creators such as Jim Henson and George Lucas have influenced his work. These threads are apparent as he has filmed shorts featuring puppets and has completed several life-sized “Star Wars” character paintings, full-scale experiments that have led to his latest series, the “La Catrina” works, paintings depicting the Mexican icon of a skeleton woman in elaborate, almost costume-like, attire.

Anderson was drawing throughout his childhood and began his college career at the University of Kentucky as an architecture student. Yet, after working on a few university stage productions, Anderson moved into theater, a fine art integrating his interest in spatial relations, painting and the force of storytelling through art.

Paintings by Anderson have appeared in plays — he created a couple of the drawings in Actors Theatre’s production of “Dracula,” as well as the paintings in last year’s “Cry Old Kingdom,” in which the lead character was a famous artist in Haiti — and, when he is off the clock, the theatricality of costume and performance often lands on his canvases.

He praises Louisville for allowing “a lot of cross-pollination. I’ve worked with theaters, puppeteers, sculptors and architects. Artists in Louisville are able to branch out — they might have a style, but they don’t always stick to a format or a medium.”

Pointing out how individuals doing the production side of theater are soaking in everything good and bad about design, Anderson exemplifies how a variety of experience has strengthened his abilities and contributed to his forte as a scenic designer.

Thankfully for us, after 20 years in theater, Anderson continues to love his work. That means you and I are sure to see his work on stage — or at a gallery — throughout the year.