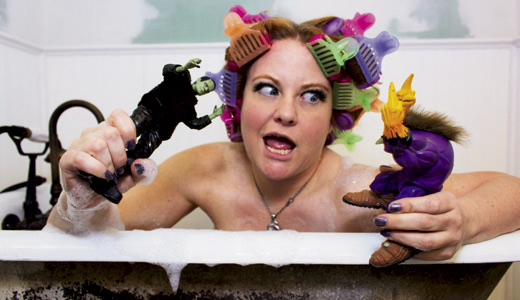 Divinity Rose is no stranger to the arts community. She has hosted spoken-word shows, written poetry, acted in independent films and dabbled in other forms of performing arts, including burlesque. Yet it is in stand-up comedy where she blossoms. She began her career in stand-up at Caroline’s in New York City in 2002 and has been performing ever since.

Last month, Rose was invited to Lima, Ohio’s “Funniest Lady” event, which honored the life of Lima’s own Phyllis Diller, a true legend and one of the first female stand-up comedians who paved the way for the likes of Joan Rivers, Ellen DeGeneres and Sarah Silverman. For Rose, this show was an exciting opportunity.

“I think it’s really cool that people took it upon themselves to create a space where Diller is remembered,” she says. “She helped me realize that just because you have all these sides to yourself, it doesn’t mean they have to go into one act, because I struggled with having this comedic side, but also having this dark, deep side that does poetry.”

Rose says many peers were surprised when she got into stand-up comedy because she had expressed herself in so many different ways — either with spoken-word or poetry. Yet the Louisville native’s interest in stand-up stems from her passion for acting, which began in elementary school. She was inspired by her fifth-grade teacher, Mrs. Oviatt, to write and perform. She continued to act in plays throughout high school, but it wasn’t until much later that she tried stand-up comedy for the first time.

“I had a friend who had a comedy showcase, and I was like, ‘I can do that,’” Rose says. “Stand-up comedy had always terrified me because you had to get up there as yourself. I have always been the type that said, ‘I’m afraid of that, I’m doing it!’ It is crazy, because it is a very intense beginning.”

Rose’s first time at the mic was at a showcase hosted by comedian Lisa Lampanelli. She had three minutes to perform in a “Gong Show”-style format. Lucky for her, she was not booed off stage — which is all she will say about that — and she’s been chasing that audience approval ever since. Like Phyllis Diller, she makes fun mostly of herself in her routine, and she doesn’t go after other people. Her comedy draws on her life experiences from being a single mother, hanging out in cyberspace with hackers and other day-to-day observations.

Rose has been very busy lately. She’s a finalist for Louisville’s Funniest Person contest at Comedy Caravan and is preparing for a one-woman show at The Bard’s Town on Aug. 23. She also started an Indiegogo campaign to raise funds to make a comedy CD and is working on a book.