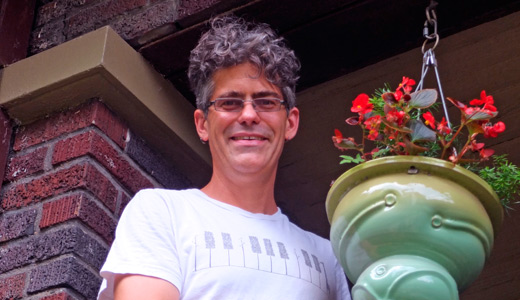 Sitting in his Old Louisville studio, surrounded by unglazed pots, J-D Schall talks about his interest in art, both ornate styles and contemporary designs that feature a crisp modern line. It’s rare to see him around earthenware; his finished work provides a vivid color snap to any situation.

“I have gravitated more toward the clean lines and bright popping colors,” the artist says, “and although I work exclusively in clay, when I approach making things, I don’t necessarily approach it as a potter. I have design in mind … I picture an environment to go with the work. For example, when I work on dinnerware, I see it on a table. As part of a room.”

Introduced to pottery in his senior year of college, Schall honed his ceramic skills in Baton Rouge, where he worked at a company producing ceramic lamp bases. Designers created elaborate patterns with gold and silver lacquer finishes, and Schall, as the lead potter, constructed the ceramic objects for the company’s wholesale clients.

More than a decade ago, after moving to Louisville, Schall utilized the knowledge he’d accumulated to form his own business, Schall Studio & Design. He mentions Alexander Calder as an influence, which you can see in the primary candy colors, the playfulness and the geometric elements of his work. Schall’s work has broad appeal and has appeared on the pages of several magazines, including Elle Decor, Domino, Southern Accents and O, the Oprah Magazine.

As his fan base has grown, Schall has become active in the Louisville arts community. You can find him and his artwork at local fairs — from the Cherokee Art Fair to the Woodlawn Art Fair in Lexington — and he has also attended wholesale shows in New York, Baltimore and more. In the fall, he will participate in the fifth annual Home Grown Home Thrown, a show organized by the Louisville Clay Club, a group of professional potters, hobbyists and individuals who simply want to learn more about ceramic art. Schall is president of the group.

Although known primarily for his functional pieces, Schall is always exploring with clay. In a show last winter, he exhibited a vast vessel filled with handcrafted pieces of ceramic okra. And visiting his studio, I spied new work exploring the use of decals, a process where photos are printed onto silkscreen and applied to glazed pieces, which are fired again, fusing the images to the glaze. The method adds narrative shapes to Schall’s contemporary forms, adding a painterly bend to the work.

Animated and hardworking, Schall praises all of the art — from sculpture to the symphony — created in our city. He credits Louisville as being a community loyal and nurturing to people pursuing creative careers.

“People are excited about the arts here, and with shows like St. James, which has been strong for over 50 years, it is clear that Louisville supports the arts.”