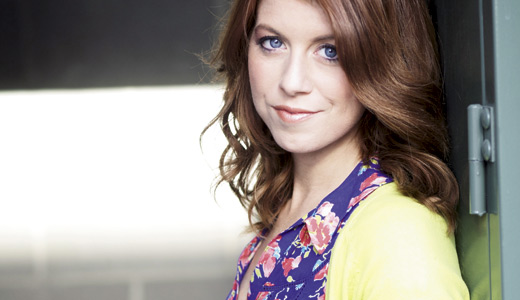 You may know Sarah East’s face from the latest Sullivan University ad campaign. Or as the girl in the swimming pool from the Safe Auto commercial. Or the girl who threw exploding Kentucky Lottery tickets off a roof. You may have even seen her appearances on “Vampire Diaries” or “Army Wives.”

But East is a live theater actor at heart. As such, the best place to catch her work is in and around the various theaters in Louisville, the city she adopted almost by accident after moving around for most of her life. It was 2007, and she decided to come here from New York City, where she had studied at the American Musical and Dramatic Academy (AMDA) College of the Performing Arts, to stay with a friend. For three months.

“I really just needed a break from the city,” she says. “I found out there was a lot more going on in the arts here than I thought. I had heard of Actors Theatre, but I didn’t realize how rich the community was in the arts.”

The truth is, she barely knew anything about Louisville at all: “I couldn’t point Louisville out on a map,” she says. “We even made jokes in school about Kentucky not being a real place.”

Three months turned into six years, and she now works for Heyman Talent as an audition coordinator, models and acts. From Theatre [502] (“Maybe the best thing to happen to Louisville theater,” she says) to Necessary Theatre to the 48 Hour Film Festival to a recent web pilot to, well, just about anything you can imagine, East is busy doing it.

For example, she recently returned from an acting job out West to facilitate empathy training for doctors. “(The actors) have to respond to bad news, and the doctors learn to cope with that,” she says.

She became interested in theater as a kid because her mother ran a theater group at their church. “Also, we watched a lot of ‘Full House,’” East says. “I was the middle child of three girls, so I identified with Stephanie Tanner.”

Acting on the show was an early dream. Asked about her role if she was cast in a “Full House” reunion, she says she would be “the quirky girl next door.” East’s wry and sometimes sarcastic sense of humor, along with true girl-next-door looks, would serve her well in such a role.

One of her career highlights thus far was being the host of the short-lived but successful web series “The PopCrunch Show,” which was a sarcastic look at celebrity culture. “It was popular because people hated me so much,” she says. “At the MTV Movie Awards, I asked Brody Jenner how much blow he could do off his own ego.”

These days, her act is a bit toned down; she is now engaged to a Louisvillian and has no plans to go anywhere — other than auditions and acting jobs, of course. She’s always looking for her next role, be it on the stage, on TV, in a film or in a commercial. And she likely won’t say no. She loves acting that much. How much? East, who is a vegetarian, explains, “People always want to know if I was cast in a fast food commercial, would I eat the burger. The answer is yes.”