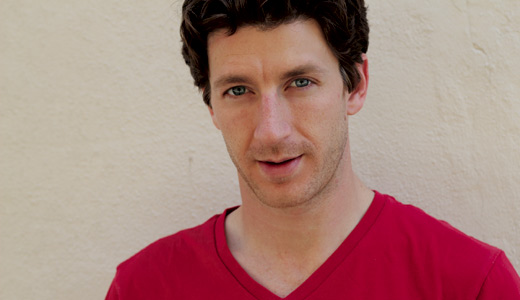 Michael Mayes has only been into acting for four years, but already he has amassed an impressive resume in the local scene. His first role was Tiny Tim in a school play when he was in second grade. He took some acting classes in college, but it wasn’t until he turned 27 and got some encouragement from a mentor that he made the life decision to focus on acting.

“I’m a disciplined artist,” he says. “It’s everything. Before I started acting, I was a rapper. There was this musician I worked with, and he told me committing to any art form is like farming. You plant your seed, something grows, you cut the weeds and keep it maintained — you have to commit to it. So as an actor, I try to maintain my instrument, my voice and my body and my mind daily, because it’s important.”

One of the hardest things for aspiring actors is breaking in, and even in our small community, newcomers often have a hard time figuring out how to get going. “I ended up going to the Theatre Alliance of Louisville auditions, and that got me connected with basically every theater company in town,” Mayes says. That one day of auditions ultimately led to roles with Pandora Productions, the Louisville Repertory Company, the Alley Theater and Theatre [502].

He’s rehearsing for Theatre [502]’s current production, “Edgewise,” which he describes as “a thriller that takes place in a fast-food restaurant, and there’s a civil war going on in America.” Mayes plays the manager of a fast-food restaurant that has a bomb explode outside, and he and his employees are faced with what to do in a crisis.

Mayes is a huge fan of the rehearsal process. “It puts you together with people you may not normally meet, so it expands your world view,” he explains. “The process of it lets ideas evolve and grow naturally over time. Playing characters has allowed me to deal with my own sort of shadow material, parts of my psyche that are either underdeveloped or that need to be eradicated or at least evolve. I always seems to get cast as villains, so it’s just always been a large part of my process.”

When asked what advice he would have for other actors, he stresses discipline — “Keeping your instrument agile, your body in tune and keep your mind alive with new thoughts, and always be open to exploring.”

Looking ahead, Mayes’ biggest goal is “to keep acting, keep growing and keep doing plays that interest me, not really thinking about the commercial fame part of it, just keep hooking up with companies I enjoy and just doing the work — doing fun, cool, work.”

In the next breath, he admits, “But honestly, my ultimate goal is to make a ton of money and travel the world doing what I love to do, and I have no problem going on record for that, too!”