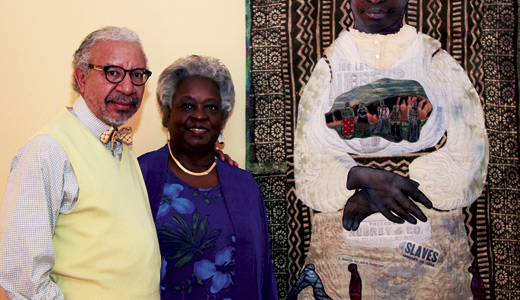 Just placing your own work around the house can be a bit boring, not to mention egotistical. It’s been said that three objects make a collection, whether they’re Beanie Babies, shoes or objets d’art. So, with an artist’s “eye” and cash in hand, what do some of our local artists buy for their personal collection?

As a potter/teacher, I expected Tonya Johnson to collect ceramics. She didn’t disappoint. Johnson attended the National Council on Education for the Ceramic Arts (NCECA) Conference in Houston earlier this year; when asked if she bought anything, her response was, “Oh, God, yeah! Oh, I bought pots.”

“I buy pots for three reasons,” she explains. “As an example for my students, from my students that are doing well, and pots I love from big-name potters: Malcolm Davis, who just died; Jenny Marsh; a lot of Laura Ross. Mike Imes in Wisconsin is my all-time hero.”

One of her non-pot purchases was a covered butter dish by Lorna Meaden. “I like her work. I like that it’s functional, also decorative and not what I do.”

“I make functional pots but buy what I don’t make,” Johnson continues. “(Because) I express myself in clay, (I say) I’m not just a craftsperson, I’m an artist. I see form first when buying for myself — I want to use them.”

Sculptor Ed Hamilton and his wife Bernadette have been married 46 years this month and have been purchasing art just about as long. Collecting, for them, is a job for two. Although Ed is the artist, he says, “It’s shared, not just me buying art. We collect what we like.” Bernadette adds, “It’s got to hit me personally, strike my fancy.”

A painting of a singer by Frank Campbell from the 1970s is a particular favorite in a house filled with art. “It’s the beginning of our collection; it anchored it,” remembers Ed. Bernadette says, smiling, “She’s just singing her heart out.”

Over the years, they’ve amassed a large number of works by local and regional artists, including Penny Sisto, Ted Jones, Elmer Lucille Allen and former Louisvillian Valerie White. They divided and conquered at “The Striped Show,” a recent exhibition at the Weber Gallery, buying works by Luci Mistratov and Candy Wheat.

Ed says that he “loves me some Marvin, got to have a Finn.” And they do — one of Marvin Finn’s rooster sculptures is running in their kitchen. They also have Finn’s portrait by Shayne Hull.

He currently owns three paintings and a print. “Original art isn’t necessarily always a cheap thing to afford,” he says. “I think for where I am in life, it’s definitely a start.”

Jenkins recently bought a contemporary work by local painter Linda Akers, while his other two paintings came from an unusual source — thrift stores. He bought the print he owns by Amos Amit at the 2012 St. James Court Art Show.

One of the first things you notice while touring glass artist/painter Tiffany Ackerman’s collection is that she loves squirrels. She even uses the word in sentences, such as “I have a lot of glass squirreled into corners.” That makes sense, especially when you understand she “feels like when you walk into my house, you walk into my head.”

“I collect everything,” she says. “I buy things I can’t make that I enjoy aesthetically so much that I have to have it.”

One of the things she has to have is glass made by Devyn Baron. “(Baron) is the coolest girl I’ve ever seen and met in my whole entire life. I probably have more Devyn work than any other work. I made it my goal to collect a piece from every series she’s made.” This has to make her Baron’s leading patron and fan.

Ackerman has worked for glassblower Brook White at Flame Run Glass Studio and Gallery since 2004, and also has collected at least one piece from all of the studio artists there.

“Clay is my first love.” This statement was uttered by painter/gallerist Billy Hertz. “We buy Oriental clay, especially turn-of-the-century, 1890s and earlier, up to 1920s. Chinese ginger jars — they have pure simplicity of form.”

Hertz and partner Tom Schnepf run Galerie Hertz, their gallery/home/garden, completely covered in art of all media. Both are active buyers, with Hertz explaining, “Tom’s thing is faces.” That’s the subject of their amazing acquisition — a lithograph by Henri Matisse. The print, No. 7 out of an edition of 25, is a black outline of a woman’s face. How they got it is serendipitous.

The longtime Matisse family lawyer and trustee, Joe Coulan, lived in the Bahamas and was a neighbor of Hertz’s father and stepmother. Hertz reminisces, “Because he wanted to help out (his friend’s) son, he asked me, ‘You like Matisse? Want to have a show?’ I said, ‘We would love to.’

“The show was in ’97. The works were direct from the estate. I picked out five (lithographs), one drawing … and a bronze (sculpture). Seven pieces — that was the limit on our insurance budget. The show was up for six weeks. We bought one (print), and two other clients bought lithos. Even then we were collecting faces.”

JFK once said that art is not a form of propaganda, it is a form of truth. Along the same line of thought, Longfellow believed that while nature is a revelation of God, art is a revelation of man. Sadly, in today’s economy, arts funding is one of the first things to get slashed. Louisvillians, however, hold our arts in high regard and continue support however and whenever. For a city our size to boast a ballet, an orchestra, an opera, dozens of theater companies and hundreds of artists, it is certainly proof of our devotion to the arts. LEO Weekly proudly brings you our annual Arts & Entertainment Guide, which includes a chat with the orchestra’s new interim chief executive officer, a glimpse of what artists hang on their walls, spotlights on major players in the community, and a listing of season schedules for galleries, theater and dance troupes, orchestras and more. Enjoy! —Sara Havens