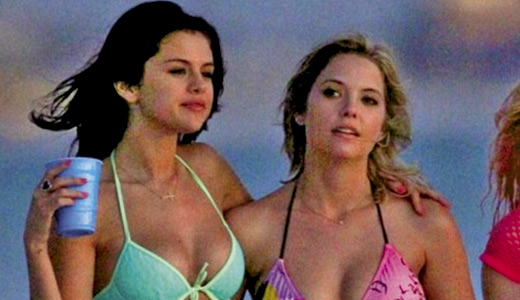 Yes, it’s another visit to the skin-obsessed world of Nikkatsu Studios, Japan’s infamous adult-film juggernaut of the 1970s. This is the first in a trilogy of films featuring nurses, such as the one played by Etsuko Hara, secretly dating a hunky doctor at Murata Hospital — until a peeping tom spills the beans! And when his wife finds out, the whole thing slides into slapstick nonsense with screwy ex-lovers, pushy lesbians and runaway household appliances forcing the poor girl into ever more hilarious and embarrassing situations. Wonderfully naughty fun for adults or those who wish they were.

This unabashed tease/stroke flick stars four of the hottest nubiles ever to fall from Disney’s graces, clad only in bikinis and handcuffs through much of the movie. Vanessa Hudgens (“High School Musical”), Selena Gomez (“Wizards of Waverly Place”), Ashley Benson (“Pretty Little Liars”) and Rachel Korine (“Trash Humpers,” who actually shows some titty) quickly wind up in trouble with the law when they rob a fast food joint and snort cocaine (sorta). Their hero is rapper “Alien” (James Franco), who posts their bail and guides them into a world of more controlled debauchery. Or something like that. It’s really hard to follow the plot with a handful of suntan lotion … Hollywood is going to need a new Oscar category.

A PG-13 rom-com-drama made for adults by adults. Tina Fey, a prim and by-the-book Princeton admissions officer, finds Paul Rudd, her former schoolmate and now high school administrator, to be something of a rascal. Now for the unexpected plot twist: Rudd has a student (Nat Wolff) who just may be Fey’s son, given up for adoption at birth! The kid isn’t Princeton material, but Fey — for complex reasons — decides to bend the rules for the first time in her life, leading to an unexpected romance. Watch it; life is an adventure.

Colin Farrell and Noomi Rapace lead Terrence Howard, Dominic Cooper and Isabelle Huppert in this first American outing for director Niels Arden Oplev (“The Girl with the Dragon Tattoo”). It’s a dark actioner about an NYC mob boss’ right-hand man (Farrell) who gets seduced by a beautiful woman-child (Rapace), unaware that she seeks revenge on his employer. Nicely gritty, well written, with great actors; worth your time.

HANDS OF THE RIPPER

The first Blu-ray release of an infamous lost Hammer Studios outing. Angrard Rees (“Poldark”) is the daughter of — dunt dunt DUUUUN — Jack The Ripper! And as an infant, she watched him murder her mother. Now an adult, she is a prostitute, the pawn of a fake psychic, when shrink Eric Porter comes to suspect that she may be unconsciously killing people. She might even be possessed by her father’s bloodthirsty spirit! Wonderful Freudian psycho-nonsense follows. Now available for the first time ever in its bloody, unedited, original form; a must-own for any Hammer fan.

This was one great show, the progenitor of the scores of “CSI”-ish programming that clogs up today’s screens. Jack “The Odd Couple” Klugman was the titular gruff, ornery medical examiner who each week got himself into and out of all manner of comic trouble using his vast knowledge of forensics. His complete lack of sensitivity about the gory nature of the work is a great part of the fun; the first season’s gag about the “Lazy ‘S’ autopsy technique” is priceless. In turns intense, angry, incensed, bullying, caring and supportive, Klugman roars through every episode.

A Robot Chicken mash-up with the DC Comics universe — including the incredibly obscure Mr. Banjo! — allowing Seth Green to wallow in his trademark silliness on a grand scale. Our favorites? “That’s Bane,” in which Bane keeps sneaking up behind Batman and breaking his back in a spoof of “Punk’d,” Lex Luthor getting repeatedly beamed by a kickball, and Glenn, who works in the Hall of Doom’s mailroom. One of his best.

Stephenie Meyer’s follow-up to the “Twilight” series contains many of the same elements, though with a lot less animal lust. The amazing Saoirse Ronan plays one of the last uninfected humans after our world is taken over by parasitic aliens. She is finally captured but forms something of a truce with “Wanderer,” her internal alien “soul” as they set out to discover love, putting them in the crosshairs of the remaining invaders. The symbolism is a bit heavy-handed, but Ronan’s performance more than makes up for it. Frankly, this flick has been roasted by critics, but we found it a notch above “Twilight,” with some solid sci-fi underpinnings.

We’re big fans of this show, if only for its pedigree: It follows a woman who suffers from hyperthymesia, a real medical condition where the sufferer is cursed with a “perfect” memory — she remembers absolutely every detail about every moment in her life, reliving it over and over, never able to forget anything. What a nightmare that would be! Poppy Montgomery plays NYC homicide detective Carrie Wells (based on a real-life hyperthymesiac, actress Marilu “Taxi” Henner — really!), whose memories are presented in a clever visual gambit that lets the viewer play along. Good stuff.

Right up front: We’re not raving fans of this SciFi Channel series; it is the very definition of cheap sci-fi, and too self-referential for the occasional viewer to follow. That being said, we are in the minority: Everyone we know loves this fantasy/comedy, revels in the guest stars (often from “Eureka” or other SciFi Channel shows), and wallows in the Fortean history behind each week’s goofy scavenger hunt. Five discs, 20 episodes guest starring Brent Spiner (“STNG”) and Sam Huntington (“Being Human”), along with newer members Aaron Ashmore and CCH Pounder.

A triple feature of Bruce Campbell-written/directed/starring flicks at a great price! “Alien” is silly SciFi Channel fodder about giant space termites with Bruce as the avenging astronaut savior of humanity. “Brain” is a wacky tale of brain transplants set in some sort of mock-Russian city with help from Ted Raimi. But the best of the bunch is “Name,” where Bruce plays himself (or a damn funny version thereof), mistaken for “Ashe,” his character from “Evil Dead.” When evil threatens, he jumps from his trailer and … well, you really need to see this for yourself. The makings of a perfect BC party; life don’t get no better.

These animated dancing-mouse vids are too cute for even the most jaded of reviewers (present!) to make fun of. Aimed squarely at pre-schoolers, but a forgivable guilty pleasure for any age, they take kids on a voyage of music, dance and not-too-thrilling adventure. This one has fun with recycling, too much paint and the excitement of meeting big-time stars!

This low-rent thriller is a hoot. Sean Patrick Flanery (“Boondock Saints”) plays an FBI agent investigating the murders of both the mayor and his chief rival. Reluctantly aided by Nordic bombshell Kristanna Loken (“Terminator 3: Rise of the Machines”), they delve too deeply in the halls of power. But it all goes nicely off the rails when Morgan Fairchild shows up as Flanery’s mom who holds a centuries-old secret that affects not just their investigation, but the soul of the entire city.

Herman Wallace, part of the “Angola Three” charged with the 1972 murder of a guard at Angola Prison, L.A., has spent the last 40 years in an isolated 6×9 foot cell, probably longer that any man in American history. This powerful doc looks at his life, his legacy, the shame it has garnered from the international community, and an unforgettable art project that he has undertaken that will restore your faith in humanity. Its simple goal: To have Wallace describe his dream house.

Set in the brutal winter of 1940, a pair of fighter planes — British and German — are shot down over Norway, with both crews scrambling for the presumed safety of a lonely mountain cabin. As the weather outside rages, can these sworn enemies work together and survive, or are they both doomed? An excellent little drama based on real events with a cast that includes Rupert “Harry Potter” Grint.

An animated look at the back story of Wolverine, directed by Joe Quesada, producer of the animated “Ultimate Spider-Man,” “The Avengers: Earth’s Mightiest Heroes” and “Iron Man” series. A great addition to the Marvel Knights canon, though we old-school Wolverine fans (as far back as 1975 when they were still called “comic books”) get a little miffed at the constant tweaking of Marvel’s history. Inspired by the classic Frank Miller/Chris Claremont Wolverine biography first presented in print in 1982.

This little Comedy Central juggernaut just keeps on a-juggernautin’ as Fred Armisen (“SNL”) and Carrie Brownstein lead an ever-evolving, hopelessly over romantic and completely warped troupe of crazies through life in Portland, Ore. Kyle MacLachlan cracks us up as the town’s Reggae bass-playing mayor, and each week there’s an impressive list of guest stars/part-time-regs including Gwen Stefani, Patton Oswalt and George Wendt in similarly unexpected settings. A “Northern Exposure” for the ’10s.

Israel’s war on terror is directed by a top secret organization called the Shin Bet, among other things responsible for determining the aggressiveness of both counter-attacks and “proactive” first-strikes. This doc has done the impossible, gathering together the six living former heads of the Shin Bet, and getting them to discuss their decisions, insights and the long-term results of their actions. Most importantly: How do they feel about their attacks now, with a two-state Palestinian solution being considered?

A nicely over-the-top South Korean disaster drama inspired by “The Towering Inferno.” While a bit overlong, the suspense builds nicely as the various characters are established, preparing to party in a high-rise building being sprayed with snow by a pair of helicopters. We’re sure you can guess what happens next, so we won’t spoil it. With a cast of thousands, all of them trying to get down the same little stairwell as the flames climb up.

Make no mistake: This is the outstanding third season of the original “Twilight Zone,” featuring such great episodes as “It’s a Good Life,” with all-powerful little Billy Mumy horrifying Cloris Leachman (“That was a good thing you did. A real good thing.”), “To Serve Man” (“It’s a cookbook!”) starring Richard Kiel, and “I Sing the Body Electric,” written by Ray Bradbury, about a robot grandmother. Thirty-seven episodes in glorious b&w; an absolute must-own!