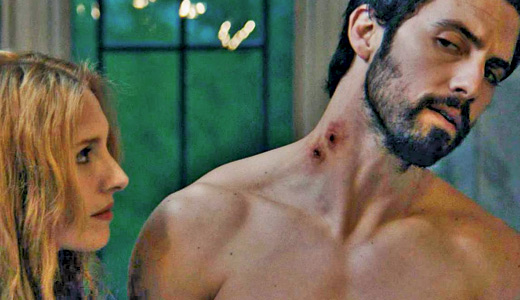 Kiss of the Damned

DETENTION OF THE DEAD

Boy says to girl: “Would you ever go out with a guy like me?” Girl answers: “My friends would eat me alive!” This broad comic homage to all things zombie and John Hughes (“The Breakfast Club”) is simply too cool for words. The “Where do I fit in?” angst of high school — coupled with the inherent vapidity of teens — is a perfect metaphor for the rotter plague befalling Jacob Zachar (“Greek”), Alexa Nikolas (“Red State,” who gets the best lines), Christa B. Allen (“Revenge”) and friends, forced to spend the night in the high-school lock-down. Smart, funny, bloody, goofy and scary; we loved it!

KISS OF THE DAMNED

If you like your demonic possession flicks with extra cheese, have we got a film for you! Low-rent horror-vet Rudy Barrow stars as a priest, along with a passel of likewise unknowns mumbling the minimalist dialogue of writer/director quickie-horror machine Philip Gardiner. Plot? Well, the Vatican puts a pair of “specialists” on the job when they detect a global spike in demonic possessions. Truly awful in the best sense. We LOVE crap like this.

Elle Fanning will completely blow you away in this tale of two inseparable teens in early ’60s London. Her friend is Alice Engler (“Beautiful Creatures”), and together they will beguile, shock, thrill and seduce you in ways you never imagined a movie could. The Cold War is heating up, the bomb is everywhere and a sexual revolution has women demanding a place in the boardroom. Amidst tragedy at home and all this worldwide turmoil, can their special bond survive? A movie you’ll be talking about for days; with Christina Hendricks, Alessandro Nivola and Annette Bening.

A kidnapping goes sour. Instead of snatching the daughter of the corrupt politico, the crooks nab his innocent chauffeur’s daughter in this subtitled thriller from the Philippines directed by Ron Morales (“Spider-Man 3”). How will the kidnappers react when the truth is discovered? Will the man’s boss help him, or is he playing his own twisted game of revenge and profit? Everything devolves into a sickening morass with more than just the girl’s life at stake. Excellent, frightening and intelligent.

More great early material from the Satellite of Love, including a riff on “The Slime People” from their first Comedy Central season, and the Cold War paranoia of “Rocket Attack U.S.A.” from their second, both starring Joel Hodgson. Our favorite, however, has to be the slam of “Village of the Giants,” starring little Ronny Howard and big Beau Bridges — with Mike Nelson doing his legendary turn as Torgo from “Manos: The Hands of Fate” between clips. Also includes “The Deadly Mantis” and some great bonus goodies, including a look at Trace Beaulieu’s career since MST3K. Sweet.

A savage conflicted-cop crime-actioner from Korea. Lee Jeong-jae stars as the undercover cop charged with infiltrating and taking down “Goldmoon,” a massive global crime organization. But he has come to believe that serving Goldmoon’s somewhat noble under-boss, Jeong-min Hwang, would bring peace sooner, though that’s not as politically expedient for his police superiors. As you would expect, it all comes to a head in a hail of gunfire.

This smart, clever Canadian comedy is being remade for U.S. audiences as “Delivery Man” starring Vince Vaughn and Cobie Smulders. We don’t see how that could possibly be funnier than this, with Patrick Huard (who reminds us of John Belushi) as a 40-something man-child and habitual sperm donor who discovers he has fathered some 500-plus children — 142 of which are suing the fertility clinic to reveal his identity. This causes a wee-wee bit of difficulty in his life. See it here while it is still charming, sardonic, nuanced and pee-yourself funny. Recommended.

Aka “Antapal,” this subtitled crime drama drops the viewer into the infamous Bangkok ganglands of the late ’50s. The protagonist (Somchai Kemglad) is a man recently released from prison who desperately longs to live a peaceful life away from the violence and drugs of the gangs. But with no other means of supporting himself, he is inexorably drawn back in.

The two best things about this truly frightening horror flick are the spooky visuals by writer/director Francis Ford Coppola and the amazing performance of Elle Fanning, who plays a ghost. Val Kilmer is the successful murder-writer who has nightmares of murdered Fanning while researching his new book. A neat twist leads Kilmer to believe he has a personal connection to her life and afterlife. Very nice; sophisticated and intelligent; a minor gem that deserves a larger audience.

Paul Walker from the “Fast And Furious” franchise goes to South Africa for this quickie car-based crime actioner. An innocent traveler (yeah, right) with mad skills picks up The Rental Car From Hell, part of a criminal plot involving high-ranking police officials. No matter, it’s just an excuse for vehicular mayhem seasoned with lots of gunplay. The cool part is that it’s all filmed from inside the car! Fun.

This latest from filmmaking provocateur Henry Jaglom stars Tanna Frederick, Julie Davis and Judd Nelson in a tale about heartbreak, acting, secrets, family rivalries and love — not necessarily in that order. Of course, Jaglom films are not really “about” what they are about, if you get our drift. Not the best he’s ever done, but one you’ll be arguing about for days.

This may be the single bloodiest move we’ve ever seen, but the splatters are not gratuitous but central to the plot. When a man discovers that his wife was killed by a local mob boss who has the corrupt police department in his pocket, he summons a demon for revenge. His pact with the creature gives him super-strength and dark powers, but there is a price to pay once the vengeance is over. Delivers what it promises.

The 1940s were famous for exotic adult dramas featuring rugged, damaged leading men and enticing women representing nature in all its cruel beauty. Case in point: This provocative and dangerous love story with Tyrone Power as a master matador at the height of his power with no place to go but down. The woman is lovely Linda Darnell, one of the most ravishing beauties that ever graced the screen. Co-stars include Rita Hayworth, Anthony Quinn, John Carradine and George pre-“Superman” Reeves. A simply great movie, one for the ages, now on Blu-ray.

Smokin’ hot Electra Avellan (“Machete”) stars in this silly-assed SciFi Channel outing about a harried dad who buys his kid a pet monkey to keep her company when he is at work (which is most of the time). But rather than the usual monkeyshines — slinging crap and humping the furniture — it turns into a bloodthirsty, bat-like homunculus, terrorizing the neighborhood. Sounds like an improvement to us.

Liam Hemsworth and Austin Stowell (“Secret Life of the American Teenager”) are a pair of soldiers stationed in 1969 Vietnam. But when Stowell’s girlfriend (Aimee Teegarden) dumps him, he and Hemsworth use their one-week leave to illegally jump a plane back home and set things right. That’s when they slam into anti-war activist Teresa Palmer (“Warm Bodies”), and everything goes to hell. A more crazy-beautiful cast we can’t imagine. Fun.

SECRETS OF WAR: THE COMPLETE SERIES

Charlton “Gun Nut” Heston narrates this History Channel series that ran off and on from 1997 to 2001. Yes, it could be seen as a thinly veiled recruitment for the NRA, with Heston extolling the virtues of an armed populace, but the real focus is on the top-secret strategies, deals, research, weaponry and spy work that never made it into the newspapers. Thirteen discs, more than 54 HOURS of secrets revealed. You gotta be impressed.

It’s really quite amazing how much of human history has been driven by our need to eat and our desire to eat something new. Remember: Columbus was looking for faster, cheaper routes to Indian spices when be bumped into North America. This doc looks at the modern-day explorers, preservationists and gourmands who are seeking new fruits to add to our diet — a diet whose nutritional content is constantly dwindling as we continue to plow deeper into corporate-controlled monocultures. Gangs of fun with a message that will make you hungry.