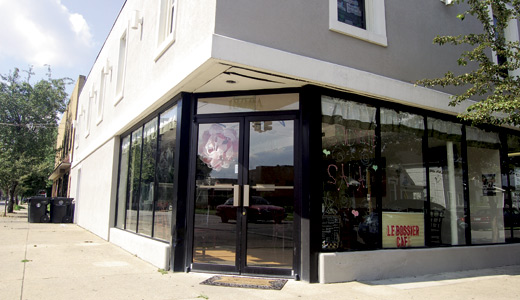 At the corner of 18th Street and Muhammad Ali Boulevard, Lisa Rainey-Goodloe is cooking up something big. In addition to her made-from-scratch gumbo, the 38-year-old Louisiana native is on the verge of opening Le Bossier Café, a Creole joint in the former Expressions of You space, as a unionized restaurant.

“I’m not aware of any other restaurant in the city committed (to the unionization process),” says Harold Embry, an organizer for the United Food and Commercial Workers Local 227 union.

“In the food service industry, there seems to be a lot of mistreatment of servers,” Embry says. “How many places do you know of where, OK, I hire somebody, they do work for me, but somebody else pays them (in the form of tips)?”

Embry has been guiding Rainey-Goodloe and Le Bossier Café’s five employees through the unionization process, offering advice and helping create a forum for employees should they ultimately decide to vote in favor of forming a union. In the event they do so, the employees would become a part of the UFCW Local 227’s 22,000 workers across Louisville and Southern Indiana, and would enjoy the benefits of collective bargaining to achieve higher wages, job security and more, depending on what their demands might be.

Rainey-Goodloe says the decision to allow her employees to unionize will make her job as owner easier.

“It’s like a security blanket,” she says. “Sometimes, in a job setting, situations come up and you can’t reach an agreement with your boss and you need someone to fall back on and support you.”

Rainey-Goodloe says she has been influenced by news stories of worker unrest and employee abuse, and that she has received negative feedback from other entrepreneurs as a result of creating a union shop within her business.

“I’ve had some people try to discourage me against it,” she says. “Because of the lack of control, because of certain stipulations and rules (the union will) want me to follow. But I feel it’s worth the effort for my employees, to do right by them.”

“One of the unique things about this is that (Rainey-Goodloe) is going to remain neutral” in the unionization process, Aleman says. “Today, so many employers won’t remain neutral. They want to take a hostile attitude toward employees when they begin to organize. I can only hope that this can serve as an example to others.”

Despite opening earlier this year, Le Bossier Café had to briefly close its doors as a result of codes issues involving the kitchen’s exhaust hood as well as plumbing inadequacies, reverting to private catering in the interim. Metro Louisville’s Codes and Regulations website lists the 1800 W. Muhammad Ali Blvd. business as having passed two inspections earlier this year related to a wiring issue and an undisclosed property violation. Rainey-Goodloe says the restaurant is now open again under a temporary permit.

On a national level, organized labor receives less than enthusiastic support from the public at a time when employees of sit-down restaurants’ kissing cousin, fast food chains, have gone on strike in protest of dismal wages.

According to a July 2011 Gallup poll conducted on the popularity of institutions (the first of its kind), only 21 percent of Americans have “a great deal/quite a lot” of confidence in organized labor, compared to 39 percent who answered “some” confidence, and 37 who replied “very little/none.” Since that poll was conducted, dozens of food-service employees have gone on strike across the nation, from New York to Chicago to Seattle, with workers at McDonald’s, Wendy’s and other chain restaurants alleging varying abuses amid an underlying conceit: that minimum wages aren’t enough to survive in today’s American economy. Currently, the federal minimum wage — which Kentucky traditionally adopts — is set at $7.25 an hour.

As discontent has grown, so have the number of workers filling food-service jobs across the country. An August 2012 report by the National Employment Law Project found that lower-wage workers account for 58 percent of jobs created since the 2008 recession, with “food preparation workers” placing second-highest on a list of 10 low-paying professions at just over 300,000 with a median hourly wage of $9.04. “Waiters and waitresses” pull in a median $7.69 per hour — the lowest figure on the list. In Louisville, the hourly median income for food preparation workers and servers is 17 cents lower than the national median, at $8.87, according to May 2012 data from the Bureau of Labor and Statistics. (The figure drops another 41 cents to $8.46 per hour if fast-food workers are included in the dataset.)

The dismal earnings of food workers in Louisville place them well under figures released in 2011 by the National Low Income Housing Coalition regarding housing affordability: According to that report, a full-time worker must earn $13.35 an hour to afford utilities and rent for a two-bedroom market-rate apartment in Louisville.

The exponential growth of food-related jobs in post-recession America have arguably made workers from fry cooks to take-out cashiers to servers not only the largest swath of the U.S. job market, but also the largest working population to be under-represented by unions: Nationwide, restaurant-centric unions remain a rarity, existing sporadically in bluer states such as New York, Illinois, Michigan and Wisconsin.

Embry says that such a union could have prevented the imbroglio that befell workers of the now-closed Lynn’s Paradise Cafe. As reported by LEO Weekly and other news outlets, a group of employees protested a policy implemented by owner Lynn Winter that required servers to provide a daily change bank comprised of $100 of their own money — aka “tip-pooling” — in violation of state and federal labor laws. Subsequent media reports painted a portrait of a work culture based on fear and reprisal, with employees under constant closed-circuit television surveillance by management.

“I can’t think of a more unfair situation than that,” says Embry. “I’m not saying that all the restaurants in Louisville do that; certainly they do not. But … if it can happen there, it can probably happen elsewhere. What (Le Bossier Café) is doing is getting ahead of it by saying, ‘We don’t want our employees to be unhappy, therefore if our employees want a union, then we’re going to recognize that union.’”

For Rainey-Goodloe, the benefits don’t stop with her employees.