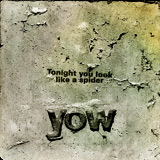 What expectations you have for David Yow should be completely ignored. Gone are the vicious and lumbering rock anthems, replaced instead by what sounds to be the mutated, science-fiction-inflected compositions punctuating Spider, the first solo record by the former frontman of Scratch Acid and The Jesus Lizard. That this is identified as “experimental” is achingly obvious, given Yow’s predilection for psychotic arrangements that defy ready categorization. There exists an almost David Lynch-like quality of madness here that commands attention. Comprised of Yow alone playing every instrument, an obvious slant toward synth string and drum sounds is punctuated erratically by what seem to be random noises, ranging from modem noises to the mewing of a cat. Tracks like “Opening Suite” or “Thee Itch” stand out as listenable, if ominous, reminders that this is something very different.