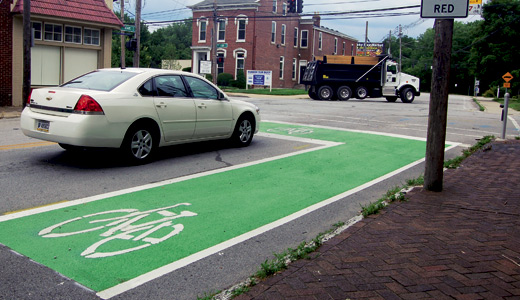 Mayor Greg Fischer suggests there are three types of people in the city: those who will ride their bicycles on anything, those who will never use their bicycle as a regular form of transportation, and those who might, if certain conditions existed. Managing the desires of these three vastly different groups is a balancing act the city will attempt more and more as it implements its plans to become a bikeable city.

The latest effort was introduced late last month. Two “bike boxes” were installed — one at Adams and Spring streets, another at Story and Mellwood avenues. The bright green boxes painted on the road call attention to the pre-existing bike lanes and push back the stop line for cars, creating a buffer zone where bicyclists can get ahead of cars stopped at red lights and better position themselves to make left turns. The idea is to reduce intersection car-bicycle collisions, which are among the most dangerous types of accidents for cyclists.

If deemed successful, the bike boxes pilot program might expand to other intersections around the city. That “if” is a major one, as even noted members of the cycling community are only cautiously optimistic about the project.

“Bike boxes were all the rage in 2007. Nobody is quite as excited about them now,” says Dave Morse of Bicycling for Louisville, a nonprofit group working with the mayor’s office. “I view these as evaluation projects. We have to see how they go.”

Morse is more optimistic about the mayor’s plans for adding 28 miles of bike lanes, which would connect the University of Louisville to downtown and make Old Louisville the first truly bikeable neighborhood in the city. He says preliminary ideas meet Bicycling for Louisville’s desires for networked access to practical destinations and adequate spacing (i.e., how far the bike lane is from parked cars’ “door zone”).

Bike boxes, as well as less-colorful equivalents, have been used successfully in many cities across Europe and Asia for more than two decades before making their way to U.S. cities like Washington, D.C., Salt Lake City and, as of May, Indianapolis. Portland installed them in 11 problem intersections where right-hook crashes were known to happen. Four years later, the city’s Department of Transportation found the total number of crashes had actually doubled at some intersections. Changes have been made to address what engineers believe is an underlying issue: bicyclist speed on downward-sloping roads.

Still, those numbers worry Tom Armstrong. The avid cyclist would undoubtedly be part of that first group the mayor mentioned — the ones who’ll ride on any street — but the ones he actively avoids are the ones with bike lanes. He isn’t interested in riding in debris-filled gutters or defending himself to a judge after getting a ticket for not utilizing the bike lane (he says friends have gone through this ordeal, though admittedly more in our surrounding counties than here in Jefferson).

“Over the past 100 years, it’s all become about the right of speed, speed entitlement,” he says. “People have been conditioned. It’s sad. I am part of traffic.”

The bike boxes undermine the natural first-come, first-served flow of traffic by allowing bicyclists to jump queue at red lights, argues Armstrong. He also worries their presence will give riders a false sense of security. After all, their success relies on drivers adhering to the posted “No turn on red” signs and checking if they are clear before turning right while the light is green.

Armstrong wishes the mayor’s plan focused more on educating drivers and cyclists alike. Later this summer, he will bring Cycling Savvy, an experiential learning program out of Orlando, to Louisville for the first time. As an instructor, he stresses “riding big” by holding your lane so others can better see you, learning evasive maneuvers (though he’s never had to use them) and following the traffic laws.

“I like to joke that I stop at stoplights just to confuse all the drivers who say cyclists never stop,” he says.

No amount of paint negates the need for common sense on the part of bicyclists, drivers or anybody else on the road. That’s something everyone agrees on.

Fischer noted at a press conference announcing the bike boxes that the city wasn’t going to be “super hard core” about cracking down on drivers who fail to use the bike boxes correctly. Brochures have been passed out to drivers explaining the boxes and their purpose. The bright color also naturally alerts drivers, he added. “It says, ‘Whoa. Something different is going on here.’”

A simple reminder that bicycles may be on the road is the point of another traffic feature being expanded in the city this summer: shared-lane markings, or sharrows. These arrows and bicycle outlines have been added to eight Louisville roadways, some in places you might expect (Main and Market streets) and others in less high-profile streets (Johnsontown Road in Valley Station).

The sharrows and bike boxes have an additional purpose beyond reaching drivers, says Fischer. They also invite non-biking enthusiasts to try bicycling for recreation or primary transportation. The objective isn’t one that should be overlooked. The more bicyclists on the roadways, the more awareness drivers will have about them throughout the city.

“If you have a conga line in traffic, which we don’t in Louisville, nobody is going to forget about bicycles,” says Morse. “Take San Francisco rush hour — bikes are popping out of the bike lanes because they’re congested.”

That would be a good problem to have.