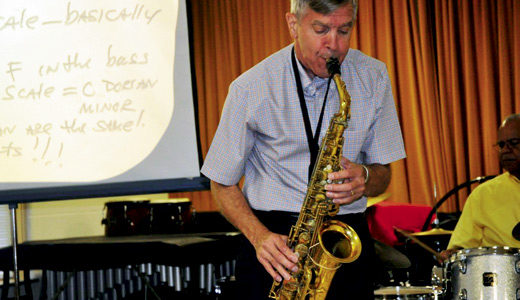 Sometimes it’s easy to take hometown heroes for granted. In Jamey Aebersold’s case, there is cause for new appreciation, because the National Endowment for the Arts has named him a 2014 Jazz Master. As noted on its site, “The NEA Jazz Masters Fellowship is the highest honor that our nation bestows on jazz artists. Each year since 1982, the program has elevated to its ranks a select number of living legends who have made exceptional contributions to the advancement of jazz.” The other 2014 recipients are Anthony Braxton, Keith Jarrett and Richard Davis.

Aebersold, a New Albany native and resident, is internationally known and respected for his work as a jazz educator. The University of Louisville School of Music has been the home of the Jamey Aebersold Jazz Studies Program since 1985, offering both bachelor’s and master’s degree programs.

Aebersold responded with a laugh to the question, “Why jazz?”

“My piano teacher fired me, and I made the natural switch to tenor banjo,” he says. “I started playing alto sax in about the sixth grade. Somewhere I saw something that said, ‘Jazz is the coming thing,’ and I bought a couple of jazz records … I have about 14-15,000 now.”

Aebersold thought he would study classical music, because there was no jazz in college. “I’d practice my classical a little bit, then mess around with jazz a whole lot. Jazz always intrigued me; there’s no comparison to any other kind of music. I couldn’t figure out what they were doing or how they were doing it.”

Back then, there was very little formal jazz education; much of the learning was through apprenticeships with older jazz musicians. Aebersold looks back to his early days, remembering driving to clubs in Louisville’s West End at first to listen, then to play alongside the musicians “… at places like The Shack, The Topaz, 118 Washington West … meeting musicians like Boogie Morton, Ray Johnson, Don Murray, Dave and Gene Klingman.”

“It took jazz education a long time to get going,” he continues. “I guess the fact that I knew nothing made me a good person to get in on it, because I started at the ground floor. I didn’t understand how (jazz players) could improvise so fast — where was it coming from?” Aebersold started taking lessons from Indianapolis cellist (and 2000 NEA Jazz Master) David Baker.

After Aebersold began teaching, he started the now-227-item series of Play-A-Long recordings, allowing musicians to practice improvising with music specifically recorded for that purpose. He has published many instructional books and has conducted more than four decades’ worth of annual Summer Jazz Workshops, offering instruction to students at all levels. Aebersold is passionate about playing for nonprofit groups and schools, paying his musicians to accompany him to spread the word.

World-renowned saxophonist Dave Liebman, a 2011 NEA Jazz Master, says, “Even beyond the NEA award, Jamey deserves the Presidential Medal of Freedom for contributions to American culture. Through his untiring labor, he has spread jazz worldwide. Jamey truly believes in the values and virtues inherent in this great music. He is completely dedicated to the cause, and because of his work, thousands, if not millions, of people have come to realize jazz in their life.”

Michael Tracy, director of the Aebersold Jazz Studies Program, notes, “I have had the pleasure of knowing, learning from and working with Jamey for over 43 years. Jamey is tireless in his commitment to helping everyone find that creative spark that resides in each of us. He has been a crusader for reaching out to the young and old, the novice and accomplished, no one is excluded. He sees no boundaries and strives to do all he can to bring out the best in people.

“I am convinced that Jamey would have been successful in anything he chose to do, (but) he chose music — or maybe music chose him. Like to many, he has been my musical father, someone to turn to as an example musically, educationally and as a person of integrity.”

Chris Clark, a 2012 graduate and now adjunct professor of music at West Virginia State University, adds, “Jazz and music education owe him a great debt of gratitude. Seeing him play regularly was a real treat, and he was always eager to help young musicians. Performing with him at the 2012 Jazz Education Network conference was a great experience.”