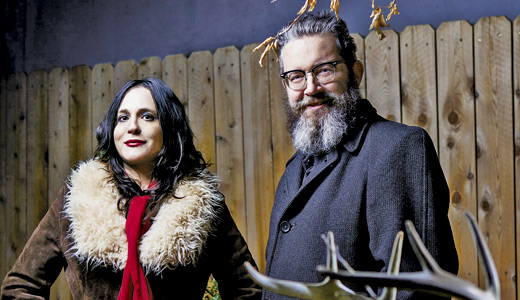 The Handsome Family is a couple, Rennie and Brett Sparks, married 24 years now and based in Albuquerque since 2001. Their ninth studio album of new, weird Americana, Wilderness, was released this spring, along with a companion book of essays and drawings by Rennie (who writes the band’s lyrics, while Brett writes the music). The theme of Wilderness is animals of all kinds, fertile ground for a woman who tells tales like a member of the Tom Waits family.

Our phone conversation began with Rennie advising LEO, “Brett’s here, if you want him to corroborate my stories.”

LEO: You guys have been married for a long time. What do you like best about him? And I’m asking, of course, because he’s there —

Rennie Sparks: His beard! I married him for the beard. I tell him that if I could have married a grizzly bear, I would’ve. But it’s not legal.

LEO: We’re kind of known for our beards in Louisville. I hope he’s not the jealous type.

LEO: So, the new record — I’m curious about how much of your writing comes from stuff you’ve read for fun, versus how much you sit down and say, “I want to research this so I have something else to write about.”

RS: I do find that, whatever you think of these days, if you search for it on the Internet, there’s amazing things you can find out (laughs). People have so many strange postings, there’s endless stuff to learn about. So when I go to read about termites, I read all these papers from Creationists talking about how termite mounds are proof of God. Things like that are kind of mind-boggling to me. Also, then you find these scientific articles talking about how termites communicate by banging their heads on the floor of the little dirt corridors inside their mounds.

Plus, one of my favorite things to do these days is to download all those 99-cent books on Kindle that are from the 19th century. You can find these amazing books that are natural histories and zoological treatises from a different point of view. There’s one I was reading last year that’s one of my favorites — it talks about different animal intelligence. This guy’s argument is that orangutans are clearly smarter than chimps because you can train an orangutan to put on trousers and light a cigar, where a chimp will not do that. A chimp can ride a tricycle but … clearly, an inferior species (laughs).

LEO: I’d think the one who didn’t smoke would be the intelligent one (laughs).

RS: This guy had a gorilla living in his house! With his 4-year-old child! He was very proud that the gorilla mastered the front door, he mastered the steps, and the gorilla and the baby were playing really nicely with each other! I don’t know how it turned out, but …

LEO: As a fiction writer, does it give you inspiration to go online, where there’s so much false information people are trying to pass off as true?

RS: Well, you know, woodpeckers are amazing, but yeah. And my theory of life is, there should be a giant cave woodpecker. I just haven’t found them yet.

Our place in this world, we never really look at anything with clear eyes, anyway. The human eye’s always subjective, so what we see is always going to be kind of false. We can’t look at animals in the natural world and see them as they are. I would say it’s impossible to look at a weeping willow and not think it’s a little sad — but it probably isn’t.