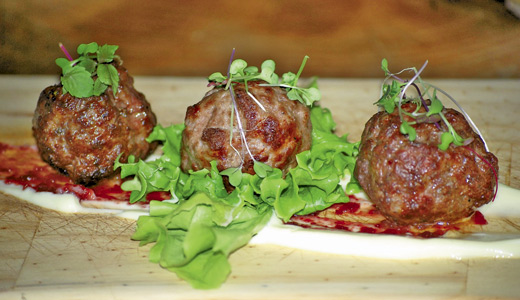 There I was, enjoying a restorative after-work power-nap, and here’s Mary shaking me awake with some kind of weird Holmes-and-Watson shtick.

“GAME!” she yelled. “We’ve gotta get over to Game while we can still get a table!”

Oh, that Game. Got it. Cool place, partner eatery of the much-loved Hammerheads in Germantown, and like Hammerheads, enjoys an audience that leans toward the hip but that happily encompasses all generations, and that fills up its smallish and very casual quarters every night but Sunday.

Game opened midwinter in a tiny spot on Grinstead Drive that had once housed an earlier iteration of August Moon, followed by a list of short-lived successors after August Moon moved into its current quarters next door.

Game, as its name implies, features a simple yet exotic selection of game meat, from bison to antelope and even kangaroo. The bison is raised locally, our friendly server said, as is beef when available; the game meats (even the ’roo, presumably) come from commercial farms in the U.S. West. (Local hunters’ trophies can’t pass regulatory muster, and as for roadkill, don’t even joke about that.)

The game, of course, is not exactly “afoot,” but, well, harvested, processed and ground for your enjoyment in the form of burgers or meatballs. If this concerns you, or even grosses you out, Game also shows its culinary diversity — and admirable kitchen skills — by fashioning remarkable veggie burgers from animal-free goodies such as lentils, corn, mushrooms and garbanzos.

The menu is simpler than it looks: A half-dozen starters ($6-$12), 10 choices of “game” (meat) and two of “field” (veggie burgers). For the meats, decide whether you want a burger (from $7 for salmon to $18 for Wagyu beef) or a meatball ($2-$6). Mount it on any of six kinds of bread, then work through lists of cheeses and fixin’s (lettuces, tomato, onions, pickle, ketchup, even spicy Vietnamese-American Sriracha). “Extras” come at additional cost, from 50 cents for egg, slaw or avocado to $8 for a slab of foie gras to tweak a burger for the 1 percent, if your budget, taste buds and conscience permit. Slather on gourmet sauces for 50 cents, for most selections, up to $2 for bone-marrow mayo.

Confused yet? That’s a lot of choices among the game and veggie burgers, so if you’d rather make it easy, just flip the page and let Game decide for you with a dozen pre-planned delights. The recommended presentation for the $14 duck burger, for instance, features greens, a fried egg and cranberry-jalapeño jam on focaccia. The mushroom-and-lentil veggie burger setup ($8) piles on slaw and roasted garlic aioli on a multi-grain bun.

As you’d expect from the sibling of Hammerheads, Game’s sociable bar offers an estimable drinks program, from $6 to $15 for a glass, $18 to $55 for a bottle on a short but well-chosen wine list. The beer list is even more impressive, with about 60 interesting artisanal bottled beers, a handful of ciders and six taps. I didn’t see any industrial labels listed, and we happily quaffed Founders All Day IPA ($5) and St. Bernadus Witbier ($6) on draft.

We put together dinner for two from both meat-based and animal-free dishes, and rated everything from satisfactory to considerably more.

Roasted bone marrow ($8) made a classic cave-person app: A foot-long length of cow’s thigh bone, or maybe its, pardon the expression, calf, was split lengthwise to open up the marrow, smeared with a pesto-and-cheese combo and roasted until the rich marrow was silken and the cheese molten. Dig it out and, if that’s your kind of thing, enjoy.

A grilled Caesar salad ($6) was excellent as is, but an accidental discovery led to a variation that I like even better: Get them to leave the creamy, calorific dressing off and enjoy the grilled romaine leaves and grilled baguette slices au naturel. The light coating of olive oil and a smoky kiss from the grill makes the lettuce delicately amazing without the need of creamy decadence.

We think the guy who set down the meatball plate got his list backward when he announced them, as the three tennis-ball-size orbs were obviously lamb ($4), antelope ($3) and wild boar ($3) in that order, not the reverse. The coarsely ground boar’s porky flavor, although somewhat overwhelmed by the scent of sage, clearly signaled its porcine origin. The lamb was mild, the antelope similarly so, only slightly gamey; again, spicy sauce was tasty, but in a temple to meat, we’d just as soon have game flavors take the lead and let the spices and sauces play in the background.

The grilled corn burger ($8), a patty shaped with poblano peppers and garbanzos, was amazing. It didn’t resemble beef, and why should it? It was an impressive “burger” with my choice of fixin’s — cheddar ($1) and tomatoes, mustard, mayo and Sriracha — and 100-percent veggie, and no apologies were needed for that.

A remarkable dinner for two came to a very affordable $46.64, plus a $10 tip for quick, friendly and knowledgeable service.