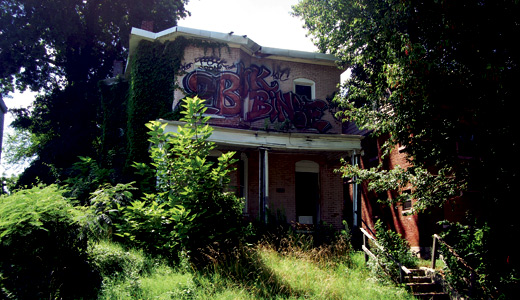 Graffiti spans the entire width of the two-story, single-family home at 1406 Catalpa St. Big, blocky type stretches from the uneven porch covering, over three shuttered windows and hundreds of worn-down bricks, all the way to the building’s flat roof. The red-brown lettering with its black outline and white highlights pops against the faded pink of the structure. The blatant, sprawling vandalism is an eyesore, to say the least. Perhaps the only good thing to be said about it is that it distracts the eye from the unwieldy grass and weeds overtaking the property’s front yard.

Like too many other homes and lots in Louisville, 1406 Catalpa St. is a vacant and abandoned property. Since 2008, it has failed almost two-dozen inspections from the city’s codes and regulations office and rounded up more than $15,000 worth of citations.

Properties like these have been an issue for the city and county for more than a decade, though the real-estate bubble bursting and the Great Recession exacerbated the problem. According to data released last month, 6,181 vacant properties have been reported to Louisville Metro, with 1,100 of them classified as abandoned. The true number of vacant homes is likely greater than 8,000.

For the house on Catalpa, however, there’s hope.

The Parkland home has been flagged for possible inclusion in a foreclosure pilot program, under which Metro initiates foreclosure action on properties that have accumulated municipal liens. The program takes advantage of legislative changes made in 2011 that give Metro tax lien priority, which means the city can more easily recoup some of its costs once the property is sold at a commissioner’s auction. (Liens are filed after fines owed to Metro for code violations and maintenance on vacant properties remain unpaid after 30 days.)

In theory, the city could break even, but Mary McGuire, who heads this Metro initiative, says that is not likely to happen given the cost of foreclosing ($1,500 to $2,500 in court fees and miscellaneous costs), how much the liens are for, and the property value assessments. The property value assessments of these vacant and abandoned homes range from $1,500 to $171,000, but most sit within the $20,000 to $40,000 range.

“The purpose of the foreclosures isn’t to make money,” McGuire stresses. “It’s to return these properties to some kind of useful purpose.”

This means the responsibility of maintenance falls on the new owners rather than Metro’s over-extended crews, whose attempts to maintain more than 6,000 vacant and abandoned properties could be seen as a lesson in futility.

Even if nobody comes forward to buy the property when it is officially auctioned off, Metro will still benefit from the official change of ownership. They’ll have control over the property, which opens up the land to alternative uses, like community gardens and projects, and makes overall upkeep easier. This is because the city must obtain a referral before conducting any yard work on a vacant or abandoned property it does not own. Of the 6,181 reported vacant properties, only 470 are owned by Metro.

McGuire and crew are reaching the home stretch on this foreclosure pilot program, which in lawyer-speak means roughly two more months. On Aug. 27, the city will host its third VAPStat town-hall-style meeting at the Louisville Free Public Library downtown. This meeting will focus specifically on foreclosures, especially explaining to the average citizen how the commissioner’s sale, held every other Tuesday morning, operates. Even McGuire, a lawyer with a real estate background, says the atmosphere can be overwhelming. She’s creating a how-to guide for potential buyers.

“We don’t want to leave people hanging out to dry with no clue what to do,” says McGuire.

Metro’s foreclosure pilot program is focusing on six target areas — Shawnee, Russell, Parkland, Portland, Smoketown and Shelby Park — that are already home to revitalization projects. The Catalpa house is only a block away from a community garden and the new Parkland Scholar House, which is scheduled to open in early August and will house 48 families with single parents working toward college degrees. A short drive away, Gill Holland leads a revitalization of the Portland neighborhood with his Compassion Building.

These neighborhoods have been disproportionately hit by traditional foreclosures. Through data it collected in 2007, the Metropolitan Housing Coalition found that while being in any part of the foreclosure process brought a loss of value, lower-income neighborhoods saw a great percentage of loss.

“The intensity is greater in California, but (the trend is) there,” says Cathy Hinko, executive director at MHC, referencing another one of the worst hit neighborhoods. “The general trend is the same — loss of value. It’s just whether you lose 12 percent or 40.”

At some point, Hinko warns, some neighborhoods’ value could become low enough that nobody will be able to renovate a rundown home or build on an empty lot without taking a financial hit. That’s an economic environment that drives new buyers and investors away.

Meanwhile, home equity has traditionally been the primary source of college financing for minority families in the United States. Decreased property values means no home equity to pull from. Jane Walsh at the Network Center for Community Change, or NC3, says she has spoken with many parents who invested in a home because they thought it would allow them to pay for their children to attend college. Now that it can’t, they are struggling to find alternative ways to better their children’s futures through higher education.

Walsh sees all of this as one interconnected, dangerous spiral.

“You’ll hear people talking about how the foreclosure crisis is abating,” she says, shaking her head in frustration. “Tell that to the people in the thick of it. This is still a very real issue for them.”

Walsh believes people incorrectly assume people will take advantage of low prices and snatch everything up, and that doing so translates into a better neighborhood.

Metro’s vacant and abandoned properties team agrees and recently consolidated all of their information and resources into one department. A website launched last month shows their laundry list of tasks — foreclosure prevention, demolitions, foreclosures and redevelopment projects. Meanwhile, nonprofits like NC3 and MHC are canvassing neighborhoods for data and opinions, spreading information and using grassroots methods to address housing inequities and neighborhood development throughout the city.

It’s agreed by everyone that a multi-faced approach is the only one that will work, but Hinko worries that what is currently being done is still only making a small dent. She believes millions of dollars need to be poured into affordable housing and vacant and abandoned property issues.

“There are 100 different things that need to happen,” Hinko says. “I fully admire the mayor’s work. They’ve been keeping on top of properties, but even if these foreclosures go through, it changes the rate only a bit. The responses, they need to be scaled up to meet the challenge of vacant properties. It’s far more expansive than we know.”