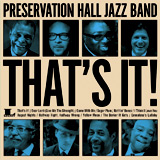 After a half century of presenting traditional jazz, the PHJB has released its first album of all original music, proudly maintaining its heritage while simultaneously showing there can be something new under the (New Orleans) sun. Louisvillians may particularly appreciate that Jim James co-produced this gem, 11 new songs that, on first listen, sound as though you’ve heard them before because of the undeniable traditional jazz roots, yet sound fresh because they have just been birthed. From the “Sing, Sing, Sing” meets Ninth Ward-vibe of the title track through sultry ballad “August Nights” to the spooky, non-sleep-inducing “Emmalena’s Lullaby,” this is a treat. In addition to the classic sound, there’s upbeat gospel — “Dear Lord (Give Me the Strength)” — and a sweet nod to Professor Longhair/Fats Domino R&B (“I Think I Love You”).