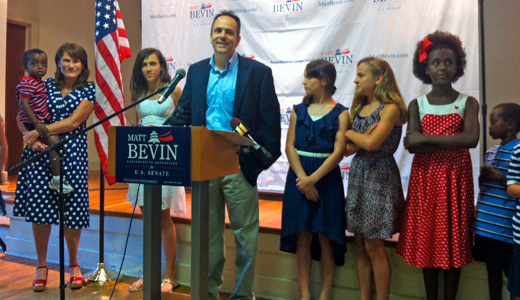 If Sen. Mitch McConnell’s No. 1 political goal three years ago was making Barack Obama a one-term president, his top goal over the past year — courting the Tea Party in Kentucky in order to avoid a credible primary challenge from his right flank — could now be equally labeled a failure.

Surrounded by supporters and media — with his wife and nine children standing behind him — Bevin touted his humble rural upbringing, his career in the Army and his success as a businessman, owning the last bell manufacturer in North America.

He then took direct aim at McConnell, painting the Senate minority leader as part of the “elite, professional politicians” in D.C. who are more interested in power games and backroom deals than standing up for Kentucky.

“After 30 years in Washington, it is clear that Mitch McConnell has lost touch with our state, its people and our values,” said Bevin.

Bevin meticulously laid out a laundry list of offenses to indict McConnell for being insufficiently pure to the conservative cause: his votes to bail out Wall Street banks and mortgage companies, allow so-called “amnesty” in 1986, increase the debt ceiling nine times over 16 years, push through intrusive domestic surveillance laws like the Patriot Act, increase taxes on the wealthy in the recent fiscal cliff deal, and his “insatiable, enthusiastic support for pork barrel, wasteful spending” during the Bush presidency.

Bevin’s campaign rollout across Kentucky in the following days impressed many observers — appearing polished in speeches and fielding media questions — along with TV ads immediately hitting the airwaves (and McConnell).

He also quickly amassed the near-universal support of the typically decentralized Tea Party groups in Kentucky, with several national conservative groups known for spending large sums of money in primary fights — such as Club for Growth and the Senate Conservatives Fund — hinting at possible future support for his campaign, as they assisted in countering McConnell’s early attacks on Bevin.

However, despite the handful of county and district Republican Party chairs introducing Bevin at his events last week, the lack of any elected officials in Kentucky coming out with public support for his challenge was especially glaring.

A day before his campaign launched, an unnamed Bevin adviser told the National Review that people close to McConnell “threatened” Bevin, “and then they tried to dangle shiny political prizes” in order to convince him not to run. At his Louisville event Wednesday afternoon, Bevin hinted to LEO that while a number of current and former elected officials had encouraged him to run, perhaps a similar type of pressure is keeping them silent at the moment.

“It saddens me, the fear that is deep within this state party,” said Bevin. “The Republican Party in the state of Kentucky is crippled by fear. There are good people, principled people, good leaders who represent us in our House (and Senate) in Frankfort who are fearful of stepping up because of the recrimination. That has got to end.”

As of today, such threats and bribes are mere rumors, as neither the Bevin campaign nor anyone else has come forward with specific allegations.

However, the Republican establishment in Kentucky is loudly supporting McConnell. State Sen. Damon Thayer, R-Georgetown, and Rep. Julie Raque Adams, R-Louisville, attended Bevin events and told reporters afterward that Kentucky should stand by McConnell, explaining that he’s used his power in the Senate to direct federal money home that has benefited the state, which it would be foolish to relinquish.

State Senate President Robert Stivers, R-Manchester, went further, telling WFPL that zealots such as Bevin “would just see government explode and be destroyed and have no government at all.”

To McConnell’s great relief, one remarkably similar small government zealot remains firmly in his corner: Sen. Rand Paul, who reaffirmed his endorsement of McConnell, though refraining from Stivers’ harsh criticism of Bevin, who he called “a good man.”

Though McConnell’s support from Paul — easily the most popular Tea Party official among Republicans in Kentucky, if not the country — could be just what he needs to prevent a grassroots onslaught against him next year, this might prove tricky for Paul to maneuver. Paul’s alliance with McConnell — presumably to help him gain stature in advance of his 2016 presidential run — might wind up eroding much of the enthusiastic support of his Tea Party base, which is generally not fond of McConnell, to be generous.

This could especially be the case if McConnell’s personal attacks from the first week of the campaign escalate. McConnell’s campaign called Bevin “an East Coast con man,” as his TV ads accuse his opponent of being a tax cheat and give him the moniker “Bailout Bevin” for accepting a state loan to rebuild his Connecticut factory after it burned down.

Bevin’s campaign has countered such attacks by noting that McConnell should be the last person to talk about bailouts, as he proudly voted for the $700 billion TARP bailout of Wall Street banks in 2008. However, without a large amount of campaign contributions — or support from outside PACs — Bevin’s message might be drowned out by the McConnell campaign’s already massive $10 million war chest.

Bevin now applies the label “Mud-slinging Mitch” to McConnell — a theme that Alison Lundergan Grimes, the presumed Democratic challenger in next year’s general election, will be sure to echo over the next 16 months — and he challenged the Godfather of the modern Republican Party of Kentucky last week in Louisville to stick to the issues.

“I’m challenging Mitch McConnell to be man enough to stand on his record, to stop the nonsense of trying to disparage people personally with false attack ads, and just stand up and talk to the people of Kentucky about why it is that he deserves another six years,” said Bevin.