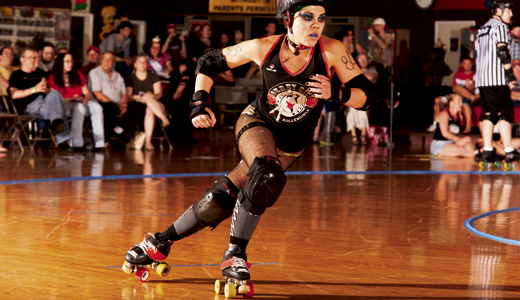 Spending days painstakingly working on something only to see it destroyed sounds like my worst nightmare. This is one of the many reasons I’m not a Tibetan monk. This week, seven touring monks from India are spending four days creating an intricate design using finely ground colored stone, only to immediately sweep it away and deposit the contents in the river. Called a sand mandala, the piece of art is a message of world peace and impermanence. The public is invited to watch construction or attend closing ceremony activities. If all that symbolism is beyond you, the monks will also give a presentation on monastic life Thursday night and host an art workshop for kids Friday. —April Corbin

‘Bourbon by the Book’

Bourbon: It’s not just for sippin’ anymore. Many books have been written about Kentucky’s liquid cash crop since the days it was shipped south on the Ohio to New Orleans. The spirit continues to inspire area authors, and a handful will be on hand Thursday at this Four Roses-sponsored “Bourbon by the Book” event, which will be held at the newly renovated Marriott Louisville East. You’ll get a chance to mingle and meet the authors — from Joy Perrine and Susan Reigler to David Domine and Albert Schmid — at a cocktail reception starting at 5:30, and if you want to stay for dinner ($60), master distiller Jim Rutledge will lead a tasting, and a four-course meal will be served. (I will also be there hocking the last of my “Bar Belle” books.) Cheers! —Sara Havens

It makes sense that Glenn Jones’ newest album is named My Garden State. Written in his home state of New Jersey, Jones’ brand of instrumental acoustic music, described as American Primitivism, evokes a perhaps simpler, more peaceful time. That the album opens and closes with wind chimes gives you a sense of being right at home, comfortable, posted up on your front porch with someone you love and something refreshing to drink. Also performing is Nathan Salsburg, whose complex guitar work is made to look simple by his hands. Virginia native Nathan Bowles of the Black Twig Pickers opens playing selections from his new banjo-centric record A Bottle, A Buckeye. Given both the inviting pleasantry of the music and the coziness of the Greenhaus, this promises to be a laid-back Kentucky evening. —Syd Bishop

JCC’s CenterStage is kicking off its season with the sassy, enthusiastic and award-winning musical “Legally Blonde.” Many may know the storyline from its movie counterpart, starring a young Reese Witherspoon, about the superficial (and sometimes ditzy) Elle Woods who, after being dumped by her boyfriend for being too simple, follows him to Harvard, befriends his new girlfriend and passes her tests with flying colors. She also teaches the local hair salon and audience the popular “Bend and Snap,” all while smiling and reminding us, “What, like it’s hard?” CenterStage premieres “Legally Blonde” with a cast that boasts a startling amount of new talent — almost half are making their debut. —Natalie French

The first two years after Touch Sensitive’s debut release were clouded in mystery: Their debut song, “Body Stop,” was among the first to be released on their label, and even after reaching the status of a cult favorite, Touch Sensitive remained an anonymous group, quiet aside from their music. After a brief stint under the name Arithmatixx!, Touch Sensitive allowed the unveiling of a new identity: the solo works of Michael Di Francesco, perhaps better known for his work with Van She. His third track, “Real Talk,” was released last year and saw a rise to the top of the indie-dance charts. This year, to celebrate the release of his EP Show Me the Pizza Guy, he goes on tour, joined by Soles and, on Friday, OKDeejays. —Natalie French

Amid scarlet starbursts and swirling indigo galaxies, cradled in an iridescent rib cage and reclining on the great crimson pillow of a human heart, a prostrate woman takes in the universe, splintering into veins with palms open to catch the starlight. Debra Clem’s mixed-media, large-scale works shimmer with intense colors, multi-layered composition and gripping images. Using Photoshop to manipulate images, from forests to power lines, Clem then draws or prints them directly onto large-scale canvas, sealing the printed image and painting human figures and abstract images onto the surface, melding digital with oil. This unique composition allows her to create multidimensional works exploring varied psychological, spiritual and physical experiences, many of which revolve around the female form. “Pairing two images together has the potential to suggest content that is different and more complex than the individual images alone,” Clem says. —Jennifer Harlan

Now that hockey is over for another year, the Derby City Roller Girls are bringing the hard hits to the rink … well, the roller rink, that is. The DCRG All-Stars face off against the Circle City Derby Girls from Indianapolis in their sixth home match of the season. With names like Contract Killer, Hostile BeeHavior and Ryder Die, you know these blockers will be skating hard to prevent the other team from scoring. The New Albanian Brewing Company will supply the beverages, and proceeds from the game go to the Alley Theater. There’s an after-party at the Monkey Wrench where you can shake hands with these inspiring, kick-ass women who fight for the Derby City. —Charles Bowles

Rabbit Rabbit is the result of a collaboration between a husband and a wife — two very experienced and adventurous musicians, Carla Kihlstedt and Matthias Bossi. Their album, Rabbit Rabbit Radio: Volume 1, is an entire year’s worth of writing and recording under their own record label, Rabbit Rabbit Records. In that year, Kihlstedt and Bossi have worked with producers Jon Evans and Joel Hamilton, who boast their own impressive resumes (Evans has Tori Amos on his list). Kihlstedt’s work can be labeled as neo-classical, haunting and avant-garde; her husband joins her in harmony, having worked with her before in The Book of Knots and Sleepytime Gorilla Museum. They’re an impressive tag-team — the kind of musical pairing that belongs together. —Natalie French

If you missed the baroque indie-pop of Daughn Gibson last fall, Tuesday is your chance to remedy that mistake. Gibson is touring in support of his most recent release, Me Moan, which dropped yesterday. On his newest album, Gibson channels Nick Cave, Leonard Cohen and Swans for an intimate and somehow surprisingly danceable — if entirely gothic — affair. That Gibson can reconcile such disparate tastes is a testament to his ability as a performer, and one well worth investigating. Also not to be missed are The Deloreans, whose infectious brand of indie-pop serves as the perfect complement to Gibson. Opening the show is the duo of Jonathan Wood (of Old Baby) and Lowe Sutherland (of Sapat), who look to provide shimmering synth landscapes to set the mood. —Syd Bishop

Louisville has a lively boat subculture, so my initial thought about Christine Hagedorn’s new work was to relate it to river transportation. I couldn’t have been more wrong. Yes, her new mixed-media sculptures are canoe-shaped vessels, but that’s not their reference point. We relate to a familiar shape. The work comes in many colors, including the autumnal hues of gold, orange and red. A few of the vessels are placed in the gallery’s large windows — the perfect place to highlight the coloring’s vibrancy. “I often use ordinary objects in my work to reference the beauty of everyday experiences,” Hagedorn says. “I love craftsmanship and enjoy seeing the influence of the hand in work … the residue of touch and the patina of age and use and their sense of history.” —Jo Anne Triplett

The newly opened CRAFT(s) Gallery is the labor of love of David McGuire and Karen Welch. Both formerly worked at the Kentucky Museum of Art and Craft, and as a result, they are firmly versed in craftspeak. Their gallery features Kentucky crafts as well as work by national artists. To celebrate their new enterprise, they asked ceramicist Laura Ross to show her work in the gallery’s first exhibition. They couldn’t have chosen a better artist; Ross is known as one of the nation’s best technical and creative contemporary potters. We’re lucky she’s local. “My pots are for living,” says Ross. “I am constantly thinking of functionality in relation to one’s daily rituals of food and gathering with friends as well as making a beautiful object for one’s space in the home.” —Jo Anne Triplett

Decca continues its quest to add as many slashes as possible to its description, with the restaurant/bar/lounge/gallery playing host to an exhibition of work by local artist Amanda Morris. Having recently completed a BFA in fine art printmaking at IUPUI, Morris incorporates lithography, silkscreen printing, etching, woodcut and other techniques into a show that explores the border between humanity and the animal kingdom, and the blurred distinctions that come into play when these two forces interact. Works such as “Staying Up” meld human and avian forms, the figures’ embrace tender yet unsettling. Morris explains, “History has shown through various forms of art that iconographical representations of animals can play a large role in the embodiment of an idea, characteristic, or even of an individual, or an empire. We see in them aspects of ourselves, humanize them while at the same time viewing them as something separate.” —Jennifer Harlan