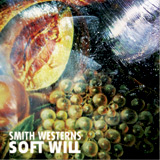 Though the name Soft Will lacks the brash and youthful imperative of Dye it Blonde, Smith Westerns’ latest finds the band sharpening their songwriting chops while further dialing back the fuzz. This isn’t to say they’ve gone soft in their old age (these once-child stars are now in their early 20s). Where they once came off as T. Rex sans the drug-induced non-sequiturs, the band has now settled comfortably in the realm of hazy ’90s Britpop balladry, mature enough that they’re able to engage in conversation with their heroes rather than imitating them. One thing hasn’t changed: Each hook is catchier than the last. Smith Westerns’ members are officially old enough that we won’t have to bring up their age anymore, and Soft Will is proof that these (ahem) men possess real depth beyond their teenage glam-posturing.