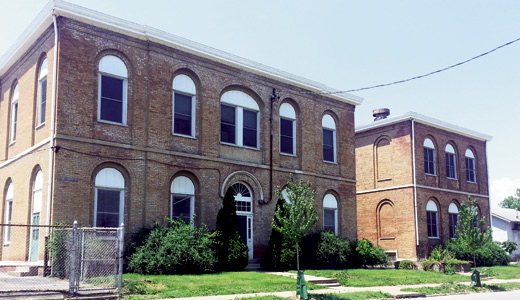 On the corner of a quiet, working-class neighborhood at 25th Street and Montgomery, the orange brick of the two-story former Portland Christian School bakes in the heat of the afternoon sun. Inside, the air is humid, musty, as if unbreathed for years; indeed, the school moved its operations to Westport Road a few years ago, and it has remained vacant ever since. A dust-streaked glass trophy case sits like a monolith at the end of a hallway, its contents harkening back to achievements of a past not long forgotten.

Clutching a sweat-beaded Heine Brothers’ iced tea, Gill Holland leads me up a stairwell, our footsteps echoing against the paint-flaked walls.

“I think there might be some asbestos in the ceiling up here,” he says, pointing to some water damage in the ceiling. “There’s still a lot of work to be done.”

Assisted by a coterie of developers and architects, the East Market Street patriarch hopes to rehabilitate the 160-year-old structure — rechristened by Holland & Co. as “The Compassion Building” — and transform it into a veritable hub of local nonprofits from which to catalyze a broader revitalization of one of the city’s poorest neighborhoods.

Three businesses will operate under the umbrella of the Portland Investment Initiative, an ambitious multi-million-dollar long-range plan that would see the Compassion Building as a kind of nexus for each of the disparate components: The Portland Avenue Stroll District LLC, which would augment the economic activity of Portland Avenue by creating new businesses; Artist Row Portland LLC, similar to Paducah’s artist relocation program, aiming to raise $2 million for revitalizing shotgun houses primarily along Bank Street; and the Shippingport Entertainment and Local Food Hub LLC, which will initially consist of 30,000 square feet of space for CSAs as well as light food production, but will grow to encompass a cluster of old warehouses for loft-style apartments and condominiums. Additionally, Holland has an option on the former Boys & Girls Club across the alley, but he is in talks with residents to figure out how to best utilize it.

All told, the initiative seeks to raise a combined $30 million to realize its vision and target areas from 15th to 26th streets and from Main Street right up to I-64 adjacent to the Ohio River.

But NuLu this isn’t — at least, not yet.

“I don’t think we will have to worry about gentrification or anything like that for another 20 years or so,” Holland says. “I’ve had an interesting time explaining to investors that we’re not looking to make a quick buck, that we’re investing in the future.”

The Compassion Building will also serve as Holland’s new HQ in lieu of his current base of operations in the Green Building, and will provide office space for Shine Contracting LLC, a Louisville-based construction company whose focus on urban in-fill seems a perfect fit. The building is also slated to host other architects, and potentially the Louisville Drum Corps., the Louisville Leopard Percussionists and a proposed Louisville Children’s Museum, which Holland says would occupy the bulk of The Compassion Building’s first floor.

Leading me into the old gymnasium in the building’s basement, Holland notes how much cooler and less humid the air is.

“This would be perfect for a hydroponic garden,” he says. “The possibilities are just endless.”

With Louisville’s last major federally funded HOPE VI housing project already underway in the Sheppard Square neighborhood, publicly subsidized large-scale urban redevelopment efforts have become scarce in America’s post-recessionary landscape. In Portland, a former shipping town whose history and growth predates Louisville’s by a stretch, the magic wand of HOPE VI was never applied, leaving its denizens largely at the mercy of the latter day forces of de-industrialization and rampant income inequality that have defined the fate of many urban neighborhoods in Louisville and elsewhere for the last several decades.

As a result, property values in Portland are among the lowest in the city, with a great many residential parcels nearest The Compassion Building fetching less than $50,000 and some listed for well under $10,000, according to data from the Jefferson County Property Valuation Administrator.

Walking along Portland Avenue at 24th Street, however, the effects of such economic stagnation aren’t as evident. A vibrant collection of shops ranging from a video store to a pizza parlor to the iconic green-bannered Shaheen’s, a uniform supply company, will form the nucleus for what Holland envisions as a “stroll district” replete with eateries and other small businesses yet to open. A block away, a historic military barracks that served as a kitchen for the Portland Christian School will be retooled into a commissary for local food truck vendors, providing them with a brick-and-mortar base of operations and offering cheap, healthy food to area residents. Nearby, a community garden managed by the nonprofit Louisville Grows is gearing up to start growing produce on a two-acre lot donated by Holland on The Compassion Building’s campus, and is set to open in mid-July.

Calling their approach “urban acupuncture,” Holland says he wants to target vacant lots and build new housing to fill in those gaps, or “missing teeth,” at the street level, and is working with Thai architect Kulapat Yantrasast, a specialist in sustainable architecture, to design what he calls “the 21st century shotgun house.” Idealized as a modern yet affordable mass-produced shotgun-style house in keeping with the neighborhood’s aesthetics, the plan is to work with city officials to apply for one of Bloomberg Philanthropies’ (founded by New York City mayor and billionaire Michael Bloomberg) so-called innovation grants to help fund the effort, which Holland says is still in its nascent stages.

Pam Rice, executive director for Portland’s nonprofit Neighborhood House, told LEO Weekly in a phone interview that virtually every resident she has talked to about the initiative is optimistic about the effort’s portents for the neighborhood she’s served for decades.

“We’re thrilled about what Gill’s doing,” Rice says. “Investment of this kind in Portland can only lead to great things.”

For Holland, it’s been a dream long in the making. Having first outlined a vision of this plan to LEO Weekly in 2009, things are finally moving, but the work is only beginning. He says that some of the initial difficulty is convincing investors, mainly from the city’s more generally affluent East End, to take a chance on Portland.

“It’s beautiful,” he says, standing in front of the Ace Hardware on Portland Avenue, looking south under the hot afternoon sun. Walking through Portland’s alleys, he muses, “I’m convinced that once people spend some time here and realize it’s not as scary as they think, they’ll see the potential. We’re on the ground floor of something great.”