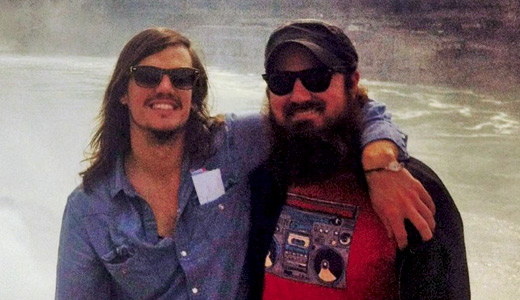 You’ve met the four musicians who perform as Houndmouth. Now, meet their tour manager. “You would think being in a band is as simple as showing up to a venue, setting up your instruments and playing a gig,” says Jason Gwin, “but that is only scratching the surface of what goes into these huge productions.”

He says the band’s daily schedule roughly follows this routine:

LEO: What do you do?

Jason Gwin: My daily duties are very detailed-oriented, mainly because each day on tour you have to follow a strict schedule. I get all of the contacts from each venue and the other bands we are touring with. I contact them to give a heads-up on advance details of the show: load-in, soundcheck, the time of the show and tons of other information important for making a show happen. I will take all of this information and compile it into the tour book that helps plan out our entire tour.

LEO: What’s the most fun for you?

JG: Routing the tour is always the most fun part. I map out our trip from show to show … if you are in New York City and your next show is in Toronto, the next day, that is a nine-hour drive. I will have to make the call to drive a couple hours after the show that night, get a hotel, and then drive the rest of the way the next day in order to make load-in.

Another job as a TM is getting in touch with the immigration folks in other countries to get work permits. That makes crossing the border a lot smoother. The first time we went to Canada, I had no idea you needed all this information. We got stopped for over an hour … now, when I see we have a stop in Canada, I will get that paperwork lined up immediately to avoid the fiasco we encountered our first time.

LEO: What’s the worst part of the job?

JG: When you get down to it, the job of being a TM is to take all the stressful elements of touring off of the band, letting them only worry about playing their show each night. I would be lying if I said being a TM is not stressful; drive a van and trailer around New York City for an hour looking for parking and let me know what you think. This job is not for everyone. It is a seven-days-a-week job, and you can be gone from home for weeks, maybe even months.

In the past year, I have been more places than some people will go in their entire life. I am very grateful for that, and also very grateful to have the opportunity to work with Houndmouth. At the end of the day, I am not only their tour manager but also a huge fan of them as musicians and as people, which makes me feel good to be involved in any way I can with their continued success.