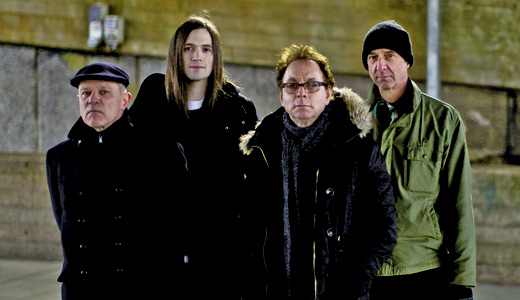 For more than 30 years, English art punks Wire have been at the forefront of musical innovation, developing a style that defies traditional genre constraints. Their influence is far and varied, as Wire have been covered or emulated by a diverse array of bands, ranging from R.E.M. to Big Black, from My Bloody Valentine to Minor Threat. Their longevity, both chronologically and artistically, is largely attributable to their futurist approach to music, finding the band in a constant state of exploration and introspection.

Their newest release, Change Becomes Us, sees the band re-imagining songs originally collected on the 1981 live release, Document and Eyewitness. Singer/guitarist Colin Newman doesn’t see this as a trip down memory lane, though, noting, “I don’t really get nostalgia. The thing about nostalgia, they’re not nostalgic for something that they can remember in their own life. Which has a kind of absurdist charm. It’s charming and ridiculous. When you’re in your 50s, it makes you sound like an old git.”

Wire refuses to accept easy categorization by existing in a state of dynamic flux. “Wire decides what kind of group Wire wants to be,” Newman says. “It’s still deciding. When you talk to a band in their 20s, they want to tell you about their sound, because they want to appeal to a certain crowd. We don’t really know what we do. You know better than us. It’s part of what I think is (someone) wanting to capitalize music. Fuck off already.”

Despite the loss of original guitarist Bruce Gilbert, replaced by Matt Simms, Wire continues to be as collaborative today as before. “It’s a band,” Newman explains. “I write the melodies and harmonies. Graham (Lewis) is responsible for the text, and I write some of the text. For the most part, no one really says to do this or that. It’s not like it’s completely off-limits to tell someone else what to play, although in recording, it tends to work. We spent a week recording as it is, pulling down the basic scenes, and then worked on production for six months.”

Newman continues, “It’s about creating an atmosphere. You just build on that in production. In some ways, what we have in common is the ability to work on this Wire thing. We can rabidly disagree, but when it comes to the core material, we can agree.”

With so vast a catalog, how do you coordinate a live show? “We developed a kind of science for it,” Newman admits. “We’re not like one of those bands that can play 200 songs and pick between (them) each night. We’re not that good. It’s about what makes you feel good that night. Everything else is kind of bollocks for me.”

Fiscally concerned, he continues, “In terms of the catalog, it’s stuff we can play, and stuff we can’t. There’s got to be a good bit of energy. We will rehearse when we get to America. We’re not touring now with a keyboard player … the cost implications are too great.”

It’s this working-class pragmatism that informs the most current iteration of Wire, that they require a steady output of new music, and an increased consideration of how they travel and how often they do so.

Newman optimistically views the matter as an opportunity to expand the band’s ever-evolving sound, as he explains about their future, “I’m not sure how much I can get into on the tele. I’m being driven by an agenda for when we should do certain things. It would be nice to do something off-the-wall.”

This will mark not only Wire’s first performance in Louisville, but also one of their first experiences in the Midwest. How can anyone process playing a new venue, especially one they’ve never visited? “Every place is different,” Newman says. “You’re standing between the audience and the band, and you’re communicating between the band and the audience; you really get a feel for the way a place is. This is the first time ever where we’ve done an American tour where we’ve done all of it. It’ll be interesting, because that’s more like how American bands tour. It’s going to be a different experience, but hopefully enjoyable.”