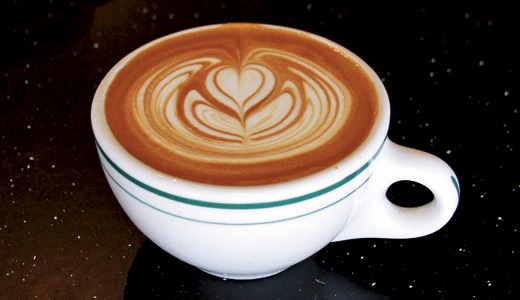 Louisville has some new champions in town, fierce competitors who face off in heated battles of precision and craft. We’re not talking about ball here — basket-, base- or otherwise. We’re talking about coffee.

As of this year, Derby City boasts both the best espresso and the best latte artist in the country. Both plaques reside at Sunergos Coffee, home of winners Aaron Kicklighter and Kenny Smith. Smith in particular has developed a reputation both within the ’Ville and on the national stage as what fellow barista Terry Conder calls “a latte art baller,” creating masterpieces of intricate hearts and rosettas out of espresso and foam.

Smith started working with coffee at Starbucks, stopping by Sunergos for his “good coffee” every morning before making frappuccinos all day. “Sunergos was always my favorite coffee shop,” he says. “I think what drew me was the craftsmanship, to see that the people working here really knew what they were doing.” Smith made the switch to Sunergos six years ago. It was also around that time that he and his roommates, all self-described coffee nerds, started holding “latte parties,” going in on a small commercial espresso machine so they could practice their art at home.

“I lived with a whole bunch of guys, and we were all into coffee,” he explains. “It was our hobby. People would just kind of hang out, baristas from other shops but also people who weren’t baristas going, ‘This is cool! Maybe I can do this …’”

These parties grew into a tradition of Thursday Night Throwdowns, monthly competitions among baristas from Sunergos, Quills, Heine Bros. and other shops, and they constituted what Smith describes as “the beginning of latte art in Louisville.”

It’s at these local throwdowns that Smith hones the skills he uses for latte art competition on the national level. Smith first began competing nationally in 2008 at Coffee Fest, an event held annually in Chicago, New York and Seattle. Coffee Fest serves primarily as a tradeshow, where everyone from manufacturers of espresso machines to coffee importers can mingle, but by far the most popular part is the latte art championships.

Sunergos boasts three Coffee Fest trophies for latte art, all Smith’s. After four years of competition, he placed second at the 2012 Chicago competition; this year he garnered second place again in New York and third place in Chicago. And, in March, Smith won the inaugural competition at the SCAA Latte Art Exhibition in Boston, coming home with a $4,000 espresso machine and the title of America’s Best Latte Artist.

Smith’s co-workers Becky Hayko and Lydia Huested have also competed nationally at Coffee Fest, with Hayko coming in the top 16 at last month’s Fest. Huested, whose father is one of the owners of Sunergos, began competing at the age of 14, first at the Thursday Night Throwdowns and then on the national level.

“It’s a really fun community,” she gushes. “At the latte art competitions, you meet baristas from so many different shops in Louisville and even farther away. It’s so much fun to be a part of.”

After his multiple successes, Smith has become a bit of a legend at the competitions. “Some people have just got mad skills,” Huested says. “If you follow Kenny around at Coffee Fest, it’s really funny, because every so often you hear somebody go, ‘Do you know who that was? That’s Kenny Smith!’”

Louisville itself has also earned a reputation for good latte art and high-quality coffee on the national stage. All four baristas are effusive in their praise of the local coffee scene, which they feel has improved dramatically over the past 10 years. “It became an ongoing joke at the competition,” says Kicklighter. “‘Another person from Louisville!’ We were really well-represented.”

Coffee Fest also hosts the America’s Best Espresso competition, which Kicklighter won this year. While latte art is all about presentation, the espresso contest is judged on taste alone, with each barista being given up to 10 minutes to pull their three best shots. Kicklighter and the folks at Sunergos spent weeks preparing for June’s fest, testing out different roast profiles and brewing techniques for their winning coffee.

Far from coming off as pretentious or insular, the bunch are all infinitely friendly and approachable, relishing the opportunity to (gently) educate the public about coffee while also acknowledging that the average customer isn’t looking for a lecture with their latte. “We know so much more about coffee than most people ever want to know,” Hayko laughs. “But we want some information to be accessible as well. Being able to teach people, especially at our downtown location, it’s enjoyable for us. I get to share something I really love.”

“You have to be able to laugh at yourself,” Smith adds, “Because there are people who just don’t care. Educating with kindness. It’s all about helping them find something they like and making sure they know what they’re asking for.”

“We strive to be as unpretentious as possible,” Kicklighter reiterates. “Just doing exceptional coffee isn’t enough to bring people back every time. People want someone who is friendly and inviting.

“Coffee is a great lubricator of conversation,” he continues. “You get to meet people from all walks of life, with lots of different opinions, similar to being a bartender. Yes, I believe that whatever you do, you should do to the best of your abilities, and you should create a wonderful product from start to finish. But at the end of the day, it is just coffee. The people you work with, the customers you meet: That’s what’s most important and enjoyable to me.”