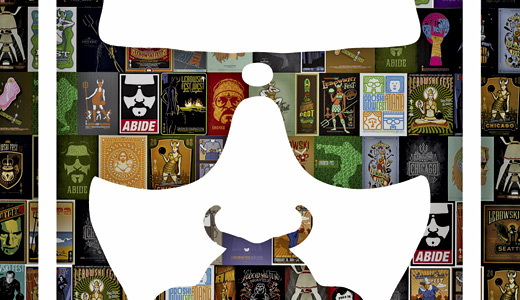 Lebowski Fest revelers take home souvenirs of all kinds — happy memories, bowling injuries, White Russian hangovers — but the most popular might be each fest’s posters, all designed by Louisville native Bill Green. Since 2002, Green has created dozens of unique posters and art prints for the fest. Add up the rest of the merchandise he’s worked on — shirts, rugs, iPhone cases and what-have-you — and we’re talking about 100 pieces of Lebowski Fest “swag,” in his parlance.

He’s seen the movie “well over” 100 times, and literally co-wrote the book on it (2007’s “I’m a Lebowski, You’re a Lebowski: Life, The Big Lebowski, and What Have You”). But how does he come up with so many fresh concepts?

“Every time I start a new one, I’m petrified that the well’s run dry,” Green says. “But I think what is driving me to try to keep it fresh is the community reaction.”

He’s not just a guy pumping out product. He walks among them. “The day when it’s, like, ‘Oh yeah, another Lebowski Fest poster from Bill …’ Maybe that’s already happened and nobody’s told me,” Green laughs.

For him, Maude’s the most versatile to draw; Donnie’s the toughest. There are many great ideas for posters, he says, but “of those, there are only a few I could execute well. That helps me a lot, knowing my limits.”

Green likens his process to going down a rabbit hole, searching for ideas. “I just like to find an eye-catching graphic and build around that … I start doodling and see what happens. And it’s really nerve-racking every time. Until I sit back in my chair and take a look at it: ‘Ok, this is going somewhere.’ (Then) I have a lot of weight off my shoulders. But until then, it’s not enjoyable,” he laughs, “what I do for a living.”

In 2007, Green and his then-wife moved to Houston when her job transferred her. “That didn’t work out,” he says now with a bit of an understatement. He thought about moving back to Louisville, but having already been uprooted, he realized that if he ever wanted to live anywhere else, this was his chance.

“I wanted to say I’d lived somewhere other than Louisville in my life,” he recalls. “Even if it means I don’t like it and I move back to Louisville. I felt like if I moved back to Louisville, I’d be looking for the house I would die in, and that kind of depressed me (laughs), so …”

He moved to Los Angeles in 2008. He knew some people there already, and “I work from home and on the Internet, so I don’t really have to be in a certain city.”

He credits his success with Lebowski Fest with giving him the ability to leave the more stable workforce behind and start his own Bill Green Studios. Today, the fest provides him with 10 percent of his clientele, a lesser percentage now than five years ago. The majority of his clients are still based in Derby City.

Green comes home every July for Lebowski Fest. “Coming back to Louisville and being able to see 90 percent of my friends at once — instead of running around town, scheduling lunches — is nice. And, yeah, the fest is always fun.”