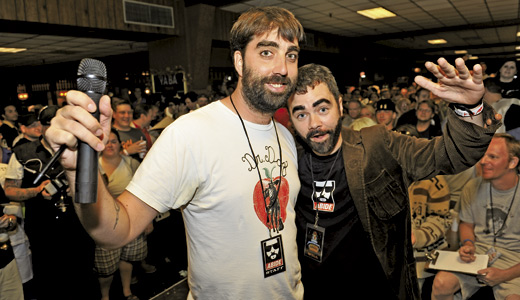 Editor’s Note: WHY Louisville proprietor Will Russell created Lebowski Fest with Scott Shuffitt in 2002. Here’s Russell’s, like, opinion, man, about why Louisville is the place to be to celebrate this classic movie.

Lebowski Fest started in the most unlikely of places: Louisville, Kentucky. Countless fans over the years have puzzled as to why this movie, which is set in Los Angeles and is largely about Los Angeles, originated a fest in a place known for its horses, pretty hats and bourbon. The simple answer is: because we live here, and that’s where we were when we were struck with the idea to gather fans of “The Big Lebowski” in a bowling alley, don costumes, drink White Russians and bowl in honor of this Coen Brothers cult classic.

The first Lebowski Fest went down in October of 2002 in a Baptist-run bowling alley that had signs reading “No Cussing” and “No Drinking” — an odd venue for a party celebrating a movie that has the F-word and its variations uttered more than 280 times in a two-hour period, and the main character, The Dude, played effortlessly by Jeff Bridges, drinks several White Russians and smokes a handful of Js.

The fans were undeterred by these restrictions. After expecting 15-20 of our friends to show up, we had nearly 150 fans come from far and wide to bowl in honor of The Dude and the wild world of Lebowski he inhabits.

With the unexpected success of the first event, we decided to do a second one the next year in a bigger bowling alley that allowed both cussing and drinking. Unbeknownst to us, the event was featured in the Spin magazine guide of summer festivals, and we were looking at 1,200 people from more than 35 states making the trek to Kentucky to celebrate all things Lebowski. Suddenly, the L.A. Times was there, and a documentary was being made, and we were in the midst of a whirlwind of the phenomenon that is Lebowski Fest.

We added a screening of the film the night before the bowling, sold out both theaters, and the bowling alley was bursting at the seams with sweaty Achievers (the preferred nomenclature for “Big Lebowski” fans) — and we were off and running.

In 2004, we decided to add live music, and, as luck would have it, our favorite local band, My Morning Jacket, was interested. When they played the movie party at Louisville’s Waterfront Park, frontman Jim James took the stage in a robe and sunglasses, drummer Patrick Hallahan picked up the sticks in full Walter gear, and bassist Two Tone Tommy donned the purple jumpsuit of everyone’s favorite pederast, Jesus Quintana. A crowd of more than 3,000 people gathered as MMJ erupted on stage, fireworks from a nearby baseball game filled the sky … and history was made. From that point on, every Lebowski Fest would kick off with a live performance before we screened the movie.

The next year, we brought in They Might Be Giants, and I was quoted as saying, “All of my nerdiest dreams have come true!” Mayor Abramson was on hand to bestow our guest of honor, Jeff “The Dude” Dowd — the inspiration for the character in the film — with a key to the city. Ironically, The Dude found himself without a ride back to the hotel that night and was left drunk and stranded, flagging down an elusive Louisville cab to take him home. One can only imagine the driver was playing The Eagles, a band The Dude famously hates.

Lebowski Fest has traveled the globe, holding more than 50 Lebowski Fests to date in more than 30 cities and overseas, but Louisville will always be the home of the original Lebowski Fest. Louisville has embraced and nurtured this strange little event with businesses opening their doors to the Achievers, and by local media coverage; WFPK has been a huge supporter, dating back to the Dan Reed era, allowing us to take over the airwaves for an hour on the Friday afternoon of Lebowski Fest.

Countless local bands have taken the stage, and local performers like the Squallis Puppeteers have often been around to add some spectacle to the already odd gathering. Lebowski Fest may have sounded impossible to anyone who caught wind of it, but somehow it works, and Louisville has made this possibility a reality. Fans who have visited Louisville just for Lebowski Fest have fallen in love and moved here after discovering the wonders that this Southern charmer has to offer.

We always make it a point to promote Louisville and offer the Achievers a local guide so they can check out Col. Sanders’ grave or enjoy the joys of a Bristol Burger. We are thrilled when we hear stories of people saying, “Louisville? That’s where Lebowski Fest came from!” Watch out, Kentucky Derby, we are gaining ground in the final furlong.